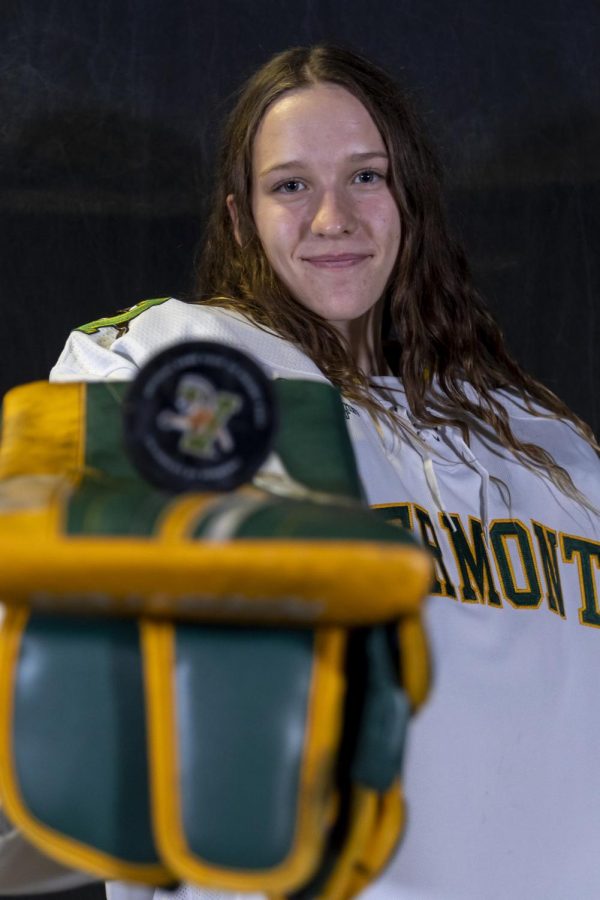 Sophomore goaltender  Jessie McPherson’s performance in January earned her conference-wide and national recognition and led Vermont to an 8-1-0 record in the month.

McPherson, a native of Chatham, Ontario, won all six of her starts in January. She earned recognition as the national goaltender of the month by the Hockey Commissioner’s Association, according to Hockey East.

McPherson’s 0.963 save percentage ranked second in the country in January. Her success led the Catamounts to their first-ever win over a No.1 ranked team and their first-ever top 10 ranking, according to UVM athletics.

“My team’s putting their body on the line and willing to do whatever it takes to keep the puck out of the net just like I am,” McPherson said.

McPherson made 35 saves in UVM’s win at No. 1 Northeastern University, including a save with 37 seconds left that was No. 2 on SportsCenter’s top 10 plays of the day, according to UVM athletics,

Despite the individual accolades, McPherson was quick to credit her teammates, who blocked a season-high 38 shots against Northeastern.

This season, she was injured in UVM’s season opener on Oct. 1 and did not return until Nov. 20.

McPherson missed games at the beginning of 2022 due to COVID-19. She cited her teammates as a motivating factor for her success once she returned.

“They have my back on and off the ice,” McPherson said. “Mentally and physically they’re there for me, and that’s been a key motivator.”

UVM is the only Hockey East team to have three goaltenders record wins. First-year Sydney Correa and senior Blanka Škodová goaltend alongside McPherson. McPherson said the three of them are very close.

“They’re definitely my best friends,” McPherson said. “I guess we’re all known as the three weirdos on the team. So it’s nice to not be the only one.”

Graduate forward and captain Kristina Shanahan said the team is confident in McPherson.

“We know that we’re gonna get a great performance from her every night and we trust her back there,” Shanahan said.

“Jesse’s an elite goalie, and [we have] that confidence that she’s there to cover up inevitable mistakes that any team makes,” Plumer said.

The team’s energy factors into their success, McPherson said.

“A big key is in between periods, before the games like, ‘hey, let’s bring some energy, let’s have fun out there,’” McPherson said. “When we’re building each other up, that’s when the intensity and the swagger kind of moves up and that’s when we’re playing with the most confidence.”

Vermont’s  final two home games of the regular season are on Feb. 11 and 12 against Boston University.