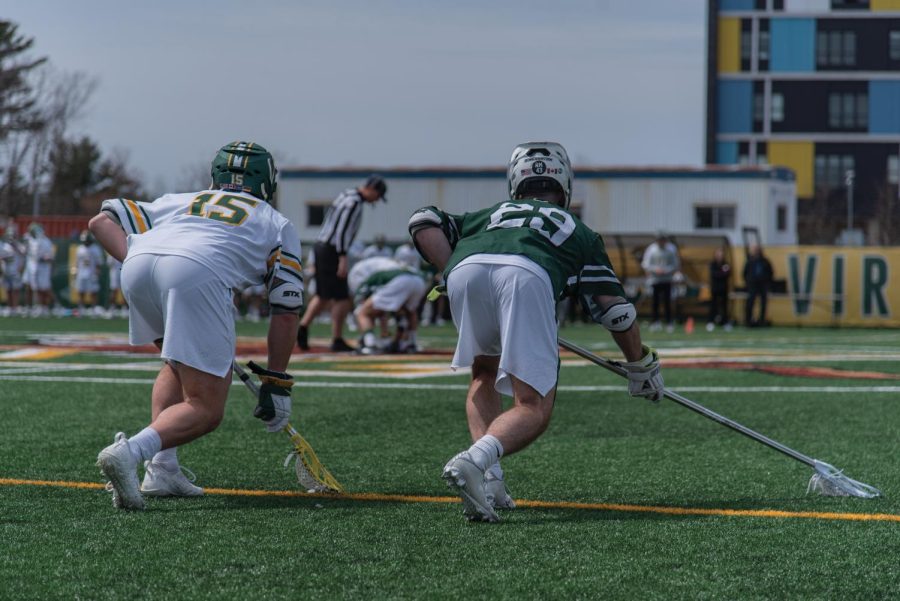 UVM men’s lacrosse earned the right to host the America East tournament for the first time in program history with a 17-10 Senior Day victory over Binghamton University April 23, according to UVM athletics.

The Catamounts clinched at least a tie for the regular season conference title, their first in program history, according to UVM athletics. UVM men’s lacrosse has now won six consecutive games.

“From six years ago to now, the guys have really bought in and made a lot of improvements over the years,” head coach Chris Feifs said. “To not only make the tournament, but to host it, means a lot to our team and the coaching staff.”

This year’s senior class is particularly special since it led the Catamounts to its first America East tournament title and NCAA tournament appearance in program history in 2021, Feifs said.

“They have really helped us build the foundation for what [our program] is now,” Feifs said.  “Culturally, they’ve been so invested and done everything that we’ve asked. They’ve been through some really crazy highs and lows over the last four years.”

Feifs enjoys working with the seniors and is focused on extending their season by advancing in the America East tournament, he said.

“It’s kind of a sad feeling to think that we’re saying goodbye to them in a few short weeks, so I just want to cherish this moment right now and not think about the future,” Feifs said. “But we definitely reflect on how special this class has been and it’s gonna be really sad to see them go.”

The Catamounts finished non-conference play with a 3-6 record against a schedule that included No. 3 Duke University, according to UVM athletics. UVM played its last non-conference game March 26.

Four of the Catamounts’ six non-conference losses were by two goals or fewer, including one-goal losses to the University of Utah and Brown University, according to UVM athletics.

The strength of the non-conference opponents and long road trips presented a challenge, Feifs said.

“[We had] the toughest out-of-conference schedule we’ve ever had, [with] a lot of those on the road,” Feifs said. “Just like every team, [we had] injuries early in the season and some inconsistency with quick turnarounds [and] back-to-back games.”

The difficult start to the season helped UVM identify where it needed to improve, McCormack said.

“We’ve been making steady improvements [on] all the things that we needed to work on,” McCormack said. “And I guess we can look back on those moments and it showed [us] what we did need to work on to get to the point that we’re at now. So we can be grateful for those in that way.”

The time off between games in the conference schedule and more home games allow for more practice time, Feifs said.

“One thing we really pride ourselves on is our preparation,” Feifs said. “Having that chance to take a deep breath and not only have a week [between games] but to play at home, I think reenergized us and allowed us to hone in on our strengths.” Before hosting the conference tournament, UVM will conclude its regular season with a road game against Stony Brook University April 30, according to the America East website. The conference tournament semifinals are scheduled May 5 and the championship game May 7.