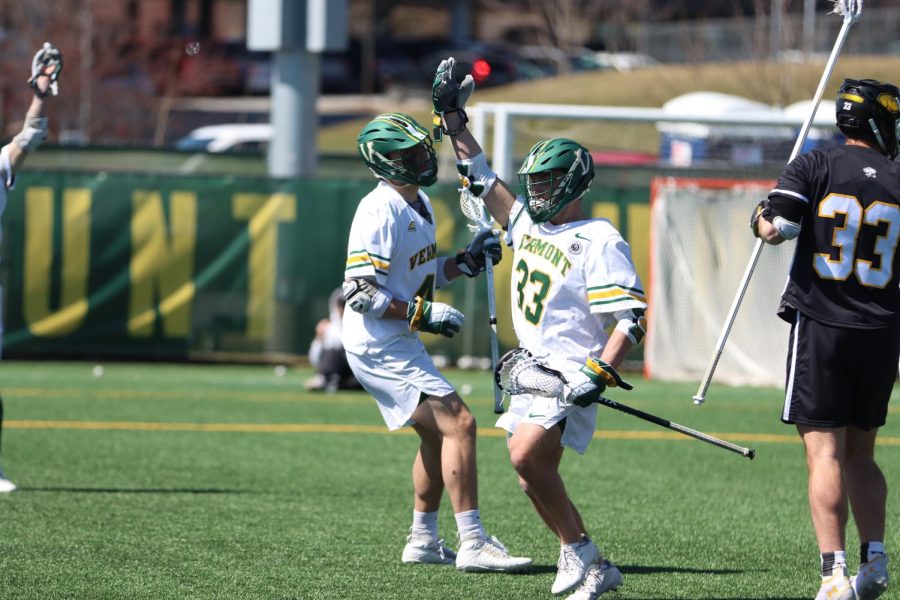 After starting the season with a 2-6 record, the UVM men’s lacrosse team has a four-game winning streak and is in first place in the America East conference with a 3-0 record against conference opponents.

“This year, with a lot of bad weather, we were inside for almost the first month of the season,” Feifs said. “I think that kind of stunted our growth a little bit. But now we’re starting to have some better weather and we’re having those full weeks again, and I think that’s helping us put together a better performance on Saturdays.”

Senior midfielder Thomas McConvey leads the UVM offense. He earned America East All-Conference First Team honors last season and continues his success in 2022. McConvey ranks No. 2 in the conference in goals and owns a 33.7% shooting percentage, according to UVM athletics’ website.

The Catamounts force the most turnovers and win the highest percentage of faceoffs in the conference, according to the America East website. Junior midfielder Nick Alviti leads the conference in forced turnovers with 1.82 per game.

Junior faceoff specialist Tommy Burke leads America East with a 0.630 faceoff percentage, winning 172 of his 273 faceoffs, according to UVM athletics.

Graduate goaltender Ryan Cornell leads Vermont’s defense. Cornell is a three-time recipient of America East’s Defensive Player of the Week award. He allows the fewest goals per game in the conference and leads the America East with a 0.594 save percentage, according to the America East.

Cornell allows an average 8.07 goals per game. No other goaltender in the conference allows fewer than 10 goals per game, according to the America East website.

Cornell’s talent leads the team from the back, Feifs said.

“He’s really been helpful to help settle the whole team early in games with a big save or with an athletic clear,” Feifs said. “His leadership, his ‘steady Eddie’ type of mentality has really pervaded the whole team.”

Cornell also occasionally gets involved on offense, tallying two assists so far this season. Feifs sometimes gets nervous about potential injuries when Cornell leaves his net but appreciates what he can add to UVM’s offense, he said.

The Catamounts defeated the University of Massachusetts Lowell 23-9 in Lowell April 9. UVM scored the first 14 goals of the game and led 17-2 at halftime.

“Great conference win for our guys on the road today,” Feifs said. “Glad we were able to fight through a rocky third quarter to finish the game. We’ve got a big week of practice ahead as we prepare for UAlbany.”

The Catamounts will travel to New York to face the University at Albany on April 16, and will return home to face Binghamton University in their final regular-season home game April 23.

The matchup with UAlbany is the first game between the two teams since last season’s America East championship game.

Vermont won the championship game 15-10 to secure their first America East title and advance to their first NCAA tournament in program history, according to UVM athletics.

The Catamounts will conclude their regular season with another trip to New York to face Stony Brook University on April 30.