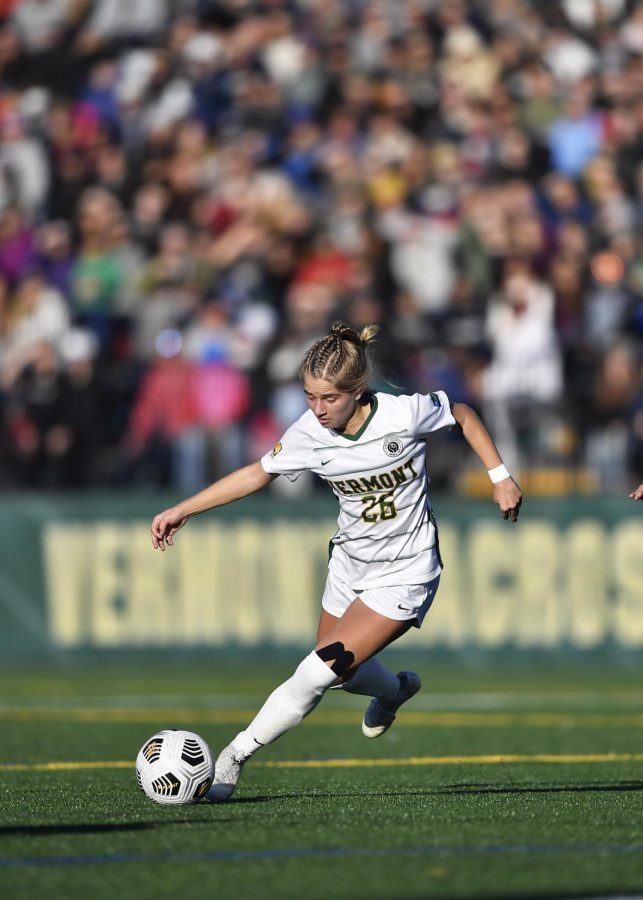 UVM women’s soccer’s historic season came to an end Nov. 12 with a 2-0 loss to Princeton University in the NCAA tournament first round.

The loss snapped the Catamounts’ nine-game winning streak, their longest since 1979, according to UVM athletics. They had not lost since a 3-0 loss to Stony Brook University on Sept. 26.

That winning run brought Vermont its first America East regular season title since 1996 and its first ever conference tournament championship. The Catamounts reached the NCAA tournament for the second time in program history and the first since 1984.

“Couldn’t be prouder and happier especially for our seniors but for this group to have the run that they did and the success that we did in conference to represent the America East and to have a great showing here,” Head Coach Kristi Huizenga said.

“It’s been incredible,” Bankert said. “I couldn’t ask for a better end to my career and I think the way we showed up tonight and the amount of support that we had was such an awesome feeling.”

The Tigers began the game on the attack and opened the scoring in the 13th minute. After a cross into the box, forward Heather MacNab deflected the ball into the air and Gee headed it in from close range.

Six minutes later Gee doubled the Princeton lead. Her free kick from 30 yards out sailed through the box and into the top corner of the goal.

Vermont had a chance to get one back late in the half when they were awarded a free kick just outside the box, but Bankert’s effort missed just over the crossbar.

The Catamounts controlled possession for parts of the second half but generated few scoring chances. Tigers goalkeeper Grace Barbara made three saves to preserve the shutout.

Eventually the final whistle blew, bringing UVM’s season to an end. The Catamounts were cheered off the field by a crowd that included plenty of fans dressed in UVM’s green and gold.

“It’s so cool to feel the support of all the alums from past years, and I’m excited to support this team now that I’m an alum,” Bankert said. “I think we really have raised the bar and we’ve set the standard for what we can achieve.”

“We’re here and we competed, we played well and we could have won that game,” Bankert said. “We belong here, and I think seeing that, especially for younger generations, is really powerful and cool.”

Huizenga was also proud of her team’s performance, she said.

“I thought that we dominated large stretches of the game, we had our own opportunities, and we were unfortunate to give up the goals that we did,” Huizenga said.

This season’s success raises the bar for the program, Huizenga said.

“The goal all along was to be on this stage, so I hope and I know that this is the new bar for us and that anything short of getting here isn’t gonna be good enough,” Huizenga said.