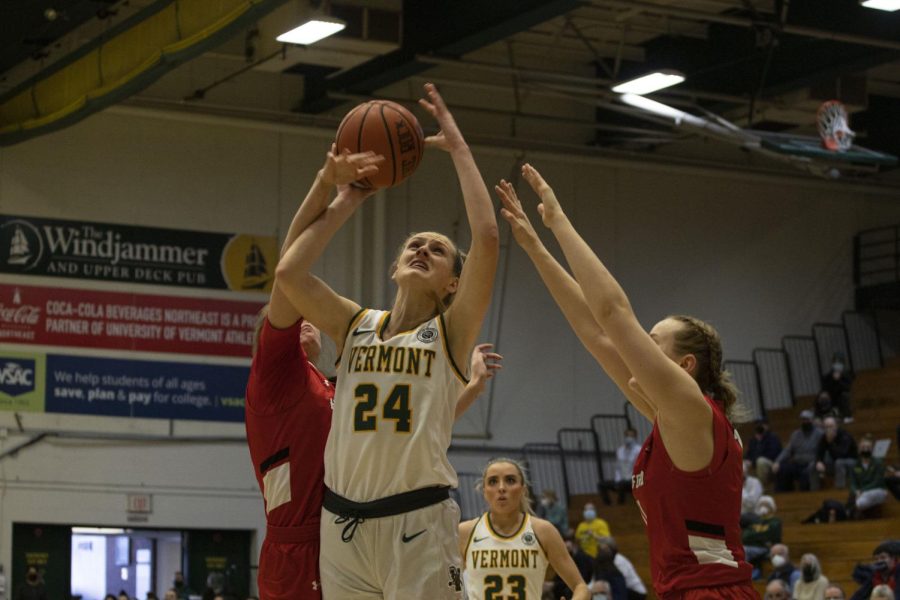 Junior guard Emma Utterback scored 21 points to lead Vermont to a 77-60 win over the University of Hartford at the Patrick Gym Jan. 21.

Vermont led 14-13 after an evenly-matched first quarter. Utterback led the Catamounts with five points while the Hawks made three 3-pointers in the quarter.

The Catamounts extended their lead in the second quarter, outscoring the Hawks 23-11. An 11-0 run late in the half allowed Vermont to take a 13-point lead into the halftime break. Hartford committed seven fouls and nine turnovers in the quarter.

Hartford cut Vermont’s lead to eight early in the third quarter, but Richason responded for the Catamounts, scoring eight straight points, including consecutive fast break baskets from Utterback’s passes. The teams traded baskets for the remainder of the quarter and Vermont held a 59-47 lead entering the fourth quarter.

“I think for me defense turns into offense, so if I have intensity on the defensive end, it’s pretty good,” Utterback said.

Vermont began the fourth quarter on an 8-2 run to extend their lead to 18 points and kept the Hawks at bay to secure a 17-point victory.

“Today was a gritty win given the quick turnaround from Wednesday,” head coach Alisa Kresge said. “I’m really proud of our bench. They gave us great energy as well as scoring and rebounding.”

The Catamounts also defeated Hartford 71-44 on Jan. 23 in West Hartford, Connecticut. They will return home to face Stony Brook University on Jan. 26.