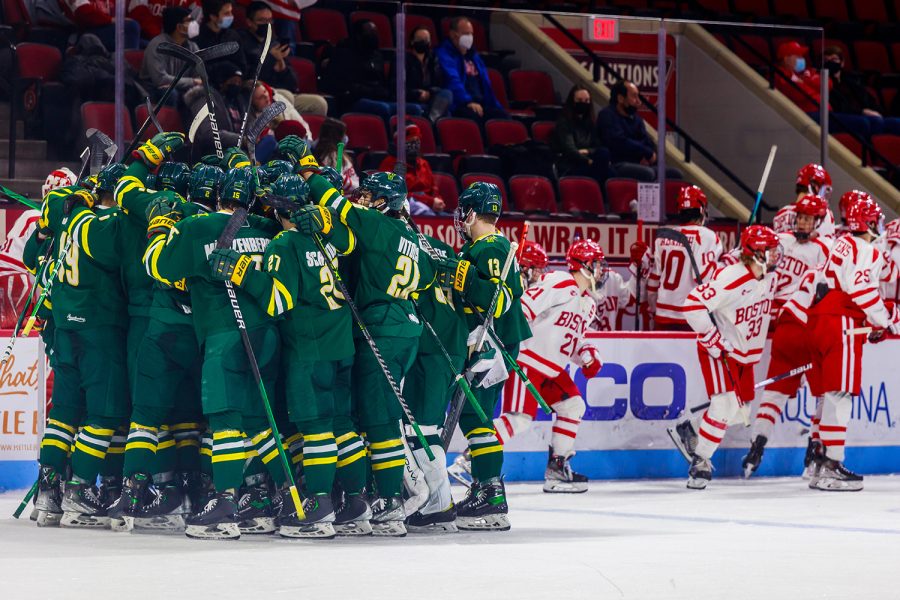 The Catamounts ended a five-game losing streak with an overtime win at BU on Jan. 21, but they couldn’t replicate the result the next day.

Forward Sam Stevens netted an early goal for the Terriers 2:49 minutes into the game. The rest of the first period was evenly matched, with each team recording nine shots on goal.

BU maintained their lead in a well-balanced second period and defensive errors allowed the Terriers to take a two-goal lead with 4:39 minutes to go.

The Catamounts increased their attacking pressure in the third period, but BU took advantage of UVM’s change in strategy when forward Robert Mastrosimone skated behind the UVM defense and slotted the puck past Carriere.

The Terriers extended their lead with 6:54 minutes remaining. Forward Jay O’Brien sent a clean centering pass from the left wing towards Phillips, who had drifted towards the high slot from the right wing. He received the pass in space and then sent a wrist shot past Carriere to make it 4-0.

Vermont continued to attack, outshooting BU 15-5 in the period. But Terriers goaltender Drew Commesso kept UVM off the scoreboard to earn his first career shutout.

“While we had some excellent offensive chances tonight, we couldn’t find the back of the net versus a good goalie,” head coach Todd Woodcroft said. “Our legs looked tired at intervals but the quick turnaround in game time was the same for both teams. Back to work tomorrow.”

Vermont steps back on the ice Jan. 28 and 29, hosting the University of Alaska Fairbanks (6-15-1) at Gutterson Fieldhouse. Both games will start at 7 p.m.