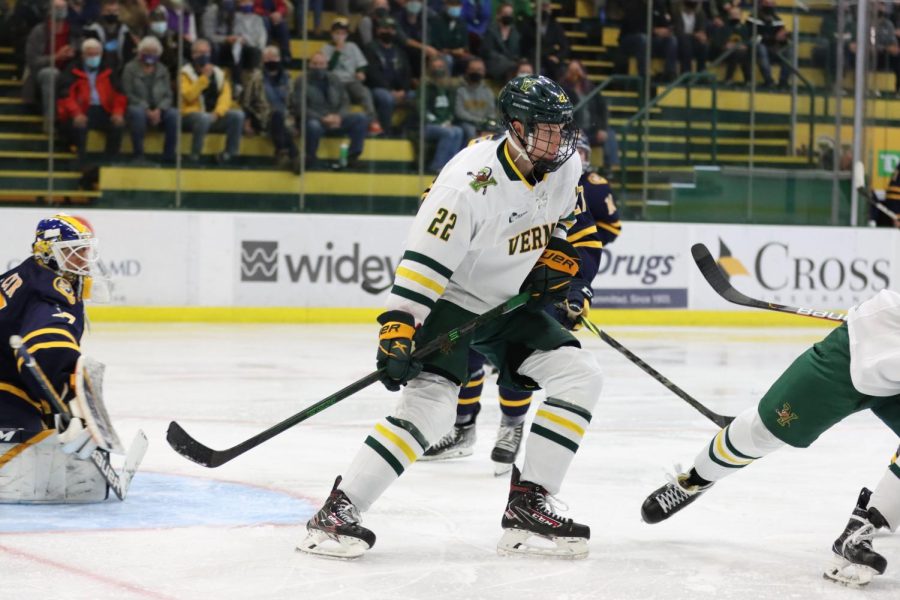 Despite a rocky start to the season, the UVM men’s hockey team showed potential for success thanks to strong defensive performances.

The Catamounts sit at 1-5-0 (1-1-0 Hockey East). While strong defense and goaltending routinely keeps the Catamounts in close games, a lack of offensive firepower leads to narrow losses.

On offense, the Catamounts average two goals per game. They scored three or more goals in a game twice and were shut out twice, according to UVM athletics.

The lack of scoring does not stem from a lack of opportunities. UVM outshot their opponents in three of six games but lost all three, according to the Hockey East website.

However, their scoring trends upwards. UVM scored seven goals across two games against No. 9 Boston College the weekend of Oct. 25. In their previous four games, they scored just four goals.

On defense, the Catamounts rank No. 4 in Hockey East with seven goals allowed in conference. They carry a 3.0 goals allowed average across their six games.

They are tied for fourth fewest shots allowed and lead the conference in faceoff win percentage, according to the Hockey East website.

Graduate goaltender Tyler Harmon contributed to UVM’s strong defensive numbers. He ranks in the top 25 in Division I in both goals allowed average and save percentage, at 2.14 and 0.923, respectively, according to the NCAA website.

The Catamounts struggled to preserve leads, losing each of the three games in which they scored first.