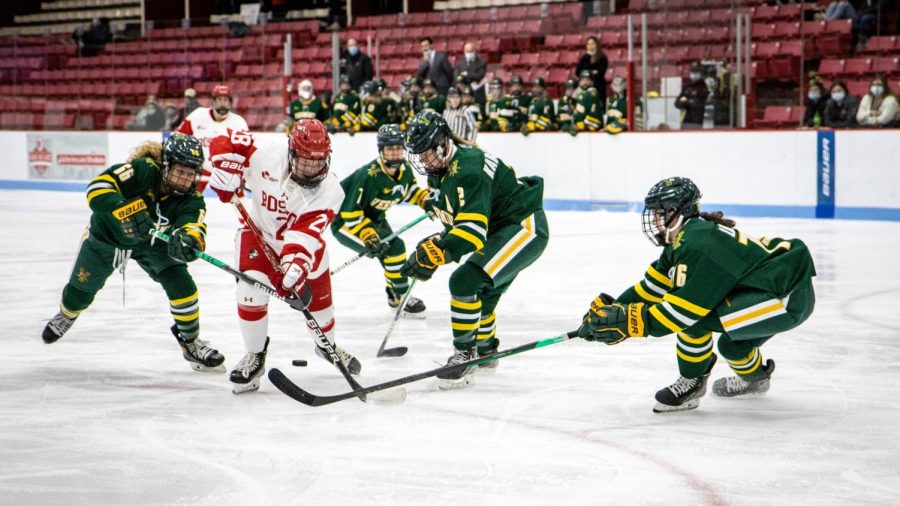 UVM women’s hockey tied Boston University and fell in overtime to the University of Connecticut on the Catamounts’ first road trip of the season.

Vermont took the lead just over 11 minutes into the opening period. Junior defender Maude Poulin-Labelle played the puck into the crease. It deflected off BU defender Alex Allan and into the net.

The Catamounts defense held BU to one shot on goal in the first period. In the final minutes of the second period, the Terriers had a spell of attacking pressure on a power play, but Vermont held the lead into the third period.

BU broke through four minutes into the third period. Forward Emma Wuthrich skated behind Vermont’s net and her wraparound shot took a deflection and got past UVM senior goaltender Blanka Škodová.

The Catamounts continued to press forward and had a number of great chances in the final minutes of regulation.

The game headed to overtime with the score 1-1. Less than a minute into the extra period, UVM sophomore forward Natálie Mlýnková had a chance on a breakaway, but BU goaltender Kate Stuart saved her shot.

Neither team could score in the overtime period and the game officially ended in a tie. The teams proceeded to a shootout to determine who earned the extra Hockey East point.

Terriers forward Courtney Correia scored on BU’s first shootout attempt. It would be the only goal of the shootout, as Stuart saved all three of Vermont’s attempts to earn BU a second point in the standings.

The Catamounts outshot the Huskies 8-6 in the scoreless opening period.

UConn tied the game with just 11 seconds remaining in the period. After the puck was dumped into the offensive zone, forward Danielle Fox gathered it behind Vermont’s goal line. Her pass into the crease deflected off Škodová’s skate and into the net.

The Huskies nearly won the game in the final seconds of regulation, but forward Jada Habisch’s shot hit the crossbar and stayed out.

For the second straight game, Vermont headed to overtime with the score 1-1.

This time, the overtime period decided the result. Forward Natalie Snodgrass set up forward Summer-Rae Dobson from close range, and Dobson’s shot beat Škodová to give UConn the victory.

The Catamounts turned in two solid defensive performances, holding BU to 11 shots and UConn to 18. Still, they take only two Hockey East points back to Burlington.

“It was a disappointing weekend on the scoreboard but not in the way we played,” Head Coach Jim Plumer said. “We have improved in so many areas and unfortunately we are not putting pucks in the net.”

Vermont will have next weekend off before traveling to Hanover, New Hampshire to face Dartmouth College on Nov. 9.