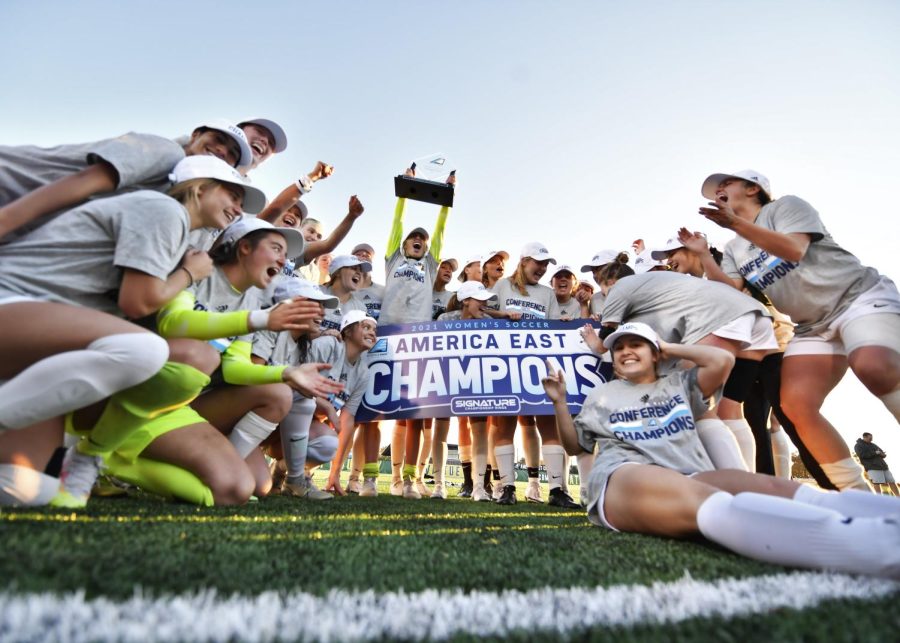 For the second time in program history, Vermont women’s soccer is heading to the NCAA tournament.

Senior forward Cricket Basa’s 80th minute goal lifted the Catamounts to a 1-0 victory over the University of New Hampshire in the America East championship Nov. 7. With the win, Vermont claimed its first America East tournament championship and will play in the NCAA tournament.

“I couldn’t be happier for our team for all the work they’ve put in, and to be able to experience this moment and the opportunity to play in the NCAA Tournament,” Head Coach Kristi Huizenga said.

Vermont had a majority of the attacking chances in the first half but was unable to score. UNH goalkeeper Cat Sheppard made four saves in the half to keep the game scoreless. First-year midfielder Bailey Ayer’s shot from close range was saved by Sheppard with 20 seconds left in the half.

The Wildcats generated more scoring opportunities in the second half. In the 63rd minute, Kessel leaped to push forward Casey Petersen’s shot over the crossbar.

UVM found the breakthrough with 10 minutes left. Ayer collected the ball on the right sideline and played a pass into the box. Basa connected with it just inside the box and her right-footed shot beat Sheppard for the game’s lone goal.

With three minutes left, Kessel saved a shot from midfielder Meghan Guarente, and Kessel covered the ball to prevent a rebound. With just over a minute left Guarente’s header missed just wide of the left post.

Seconds later time expired and the Catamounts poured onto the field in celebration in front of an energized crowd of 2,017 fans at Virtue Field, according to the America East website.

“To have this type of turnout and the support from our community and from our fellow student athletes is absolutely incredible,” Huizenga said. “We’re so so so thankful and it just created such a special atmosphere tonight to play in.”

The Catamounts also won the conference regular-season title for the second time in program history and the first time since 1996.

“I love my team and every single person worked so hard,” senior goalkeeper Lydia Kessel said. “We challenged each other so hard in practice every single day and it’s just a full team effort. I’m just so happy and proud.”

Vermont will find out their matchup in the NCAA tournament’s first round during the selection show on Nov. 8 at 4:30 p.m.