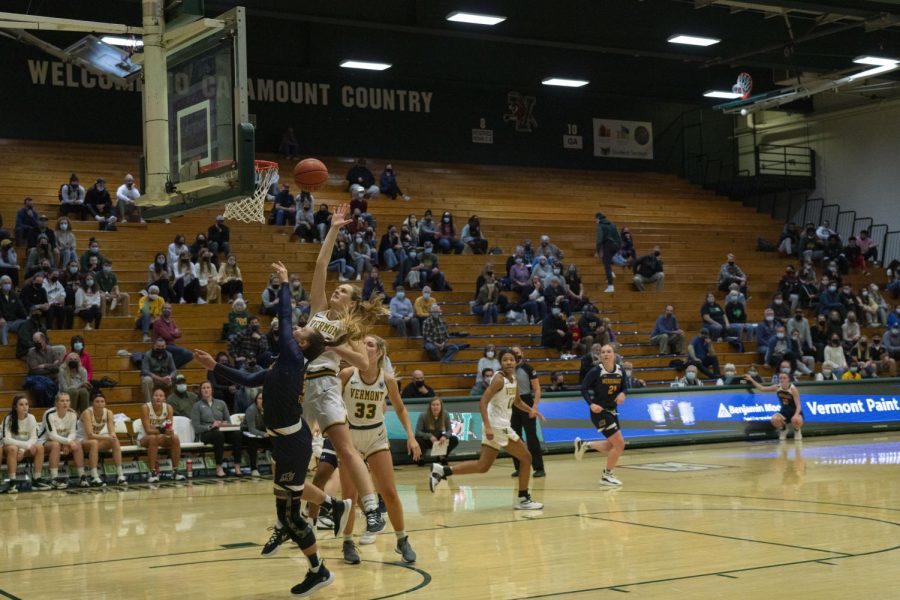 The UVM women’s basketball season concluded with a loss to the University at Albany in the America East semifinals on March 8.

Utterback helped her grow as a player over the course of the season, Gilwee said.

“I have literally gone to Emma, anytime that I’ve felt like I didn’t know how to tackle an issue as a point guard,” Gilwee said. “She’s taught me how to fend off defenders and also how to take control of the game.”

Utterback said she appreciates how Gilwee’s intelligence and work ethic makes them both better players.

“She’s worked so hard,” Utterback said. “We’re always pushing each other on the floor in practice and it pays off in the game. She’s extremely smart, has a high IQ, and I think everyone can see that.”

Utterback led the Catamounts in scoring, averaging 13.5 points per game. She scored a career-high 25 points against the University of Massachusetts Lowell on Feb. 26, according to the webpage.

“I think as a freshman coming in, my goal was to obviously help turn around a program that has a really good history at being successful,” Utterback said. “This [was] my goal since I stepped foot on this floor here, so I’m really excited that it’s coming to life.”

Larkins set a single-season program record by making 73 three-pointers. Her 233 career three-pointers are No. 2 in school history, according to the webpage.

“I think the three of them are just incredible human beings and worked their tails off to help this program, and more importantly, what they do in the locker room to keep the spirits up on tough days,” Kresge said.

Vermont finished the season with a 20-11 record and a 13-5 record in America East play. In the America East quarterfinals, they defeated Binghamton University 73-65 for their first conference tournament win in nine years, according to the webpage.

Sophomore forward Anna Olson said she was especially happy for the seniors to win their first playoff game.

“It’s great to get a first playoff win for the seniors especially,” Olson said. “They’ve been here four or five years and haven’t won a playoff game, so winning it for them was just so exciting.”

“It’s my third year here and obviously, our record this year is a lot better than it was my first year,” Utterback said. “I think a lot of us are really brought in. We put in the extra time and extra work and it’s really paying [off].”

With four of five starters returning including three of UVM’s four top scorers, the Catamounts will look to build on this season’s success and contend for an America East championship once again.