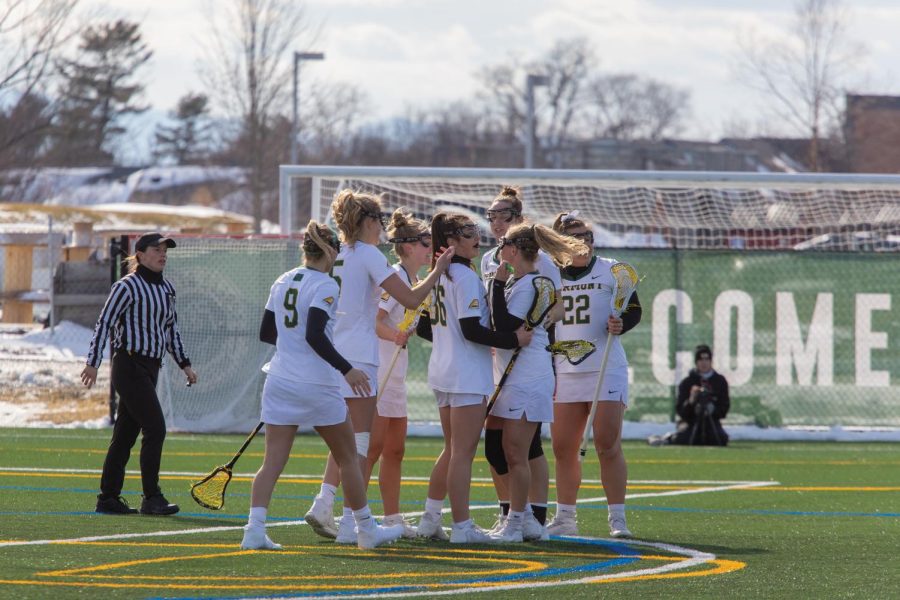 The UVM women’s lacrosse team is off to a successful start this season, winning eight of their first nine games, according to UVM athletics.

The 8-1 start marks the best in program history, according to UVM athletics. The Catamounts earned their sixth straight victory by defeating Merrimack College 20-7 on March 23.

Vermont’s six-game winning streak is tied for the longest in program history, matching the program record set in 1984, according to UVM athletics.

A large part of UVM’s start stems from their 5-2 record away from home. The team sees road trips as an opportunity to prepare for games and team-build, head coach Sarah Dalton Graddock said.

“It’s just nice to get away with the team,” Dalton Graddock said. “You’re on the bus, in the hotel together, meals, all that stuff. It creates this little bubble, lets us spend time together as we start to focus on the game.”

The Catamounts force the most turnovers and allow the fewest goals in the America East, according to the conference’s statistics page.

“Drummond does a great job as the leader of our defense, just oversees all of that and gets them ready,” Graddock said.

“We have great veterans on defense,” Graddock said. “CC [Carrera] is a senior and she’s been starting since she was a freshman, obviously you have Sophie [McLaughlin] in cage, and they’ve been able to build some great camaraderie in the past two or three years.”

“We’re just trying to disrupt the other team’s offense as best as we can, just being aggressive,” Carrera said. “That is pretty much always our defensive mentality.”

A gritty style of play and constant hustle is key to her defensive success, Carrerra said.

The Catamounts also found success on the offensive end. They score the second most goals per game and take the most shots per game in the conference, according to America East. Junior midfielder Ava Vasile ranks No. 4 in the league in goals per game and No. 2 in shot attempts per game.

Senior attacker Taylor Mullen recorded her third consecutive hat-trick in the win over Merrimack, according to UVM athletics.

“Our mentality is that everybody eats,” Graddock said. “We really talk about sharing the ball, everybody being a threat. We haven’t had our full offensive unit every single game with injuries and different things that have impacted us there, but we had that ‘next woman in’ mentality.”

The Catamounts fell 14-4 at No. 6 Stony Brook University on March 26. They return to action hosting the University at Albany on April 2 at 3:30 p.m.