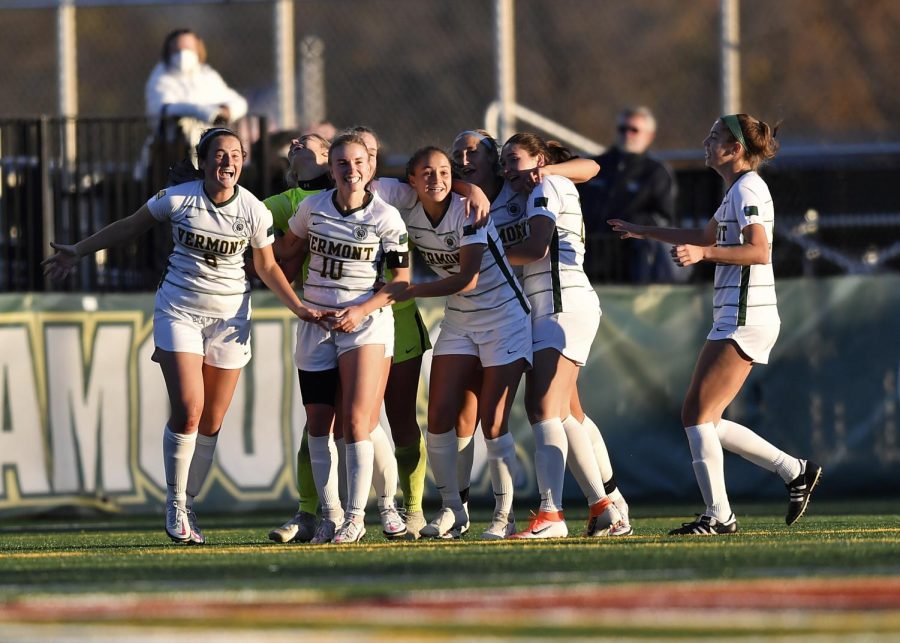 Huizenga brought the Catamounts to the tournament for the second time in school history and the first time since 1984. UVM’s 12-6-1 record is their best since 1996.

Huizenga grew up in Colchester and considered attending UVM, but said she didn’t think UVM could offer her the high level of play she was looking for at the time.

“Being a local kid and being such a big supporter of UVM growing up, it was in the back of my mind to maybe come here and play for my home school,” Huizenga said. “But I felt like the program wasn’t quite where I aspired to be as a player yet.”

“When I started my coaching journey I was fortunate to end up back here and now have an opportunity to get the program to a place where I could maybe go back in time and recruit players like myself,” Huizenga said.

This season, Huizenga’s experienced team brought the program to new heights —but not before facing a good deal of adversity.

After a 3-0 loss to Stony Brook University on Sept. 26, the Catamounts walked off Virtue Field with a 3-5-1 record and a 0-2 mark in conference play.

It took 10 games and 47 days before Vermont lost again. In between was a history-making run that redefined what UVM women’s soccer could be.

The last time the Catamounts left Virtue Field, it was with a trophy lifted above their heads as they were saluted by a raucous crowd of 2,017 fans, according to UVM athletics.

Their 1-0 victory over the University of New Hampshire on Nov. 7 brought them their first conference championship.

Along with Huizenga are two players native to Vermont, graduate midfielder Ella Bankert, of Cuttingsville, Vermont, and senior forward Cricket Basa, of Montpelier.

Bankert, in her fifth year with UVM, made the all-conference First Team and was the conference’s Midfielder of the Year, according to the America East website.

Bankert said she was thrilled to end her career in the NCAA tournament.

“I couldn’t ask for a better end to my career,” Bankert said after the loss to Princeton. “I think the way we showed up tonight and the amount of support that we had was such an awesome feeling.”

Basa grew up in Montpelier and transferred to UVM from the College of the Holy Cross. With just over 10 minutes left in a scoreless game, Basa scored the goal that lifted Vermont to its first ever America East tournament championship.

“The goal all along was to be on this stage […] this is the new bar for us and that anything short of getting here isn’t gonna be good enough,” Huizenga said.

The program grew into a program she would have been happy to attend as a player, Huizenga said.

“I think that we have a lot of players on the team that if I was here growing up then I would have been very excited to play with,” Huizenga said. “So I think that says to me that we’re doing okay.”