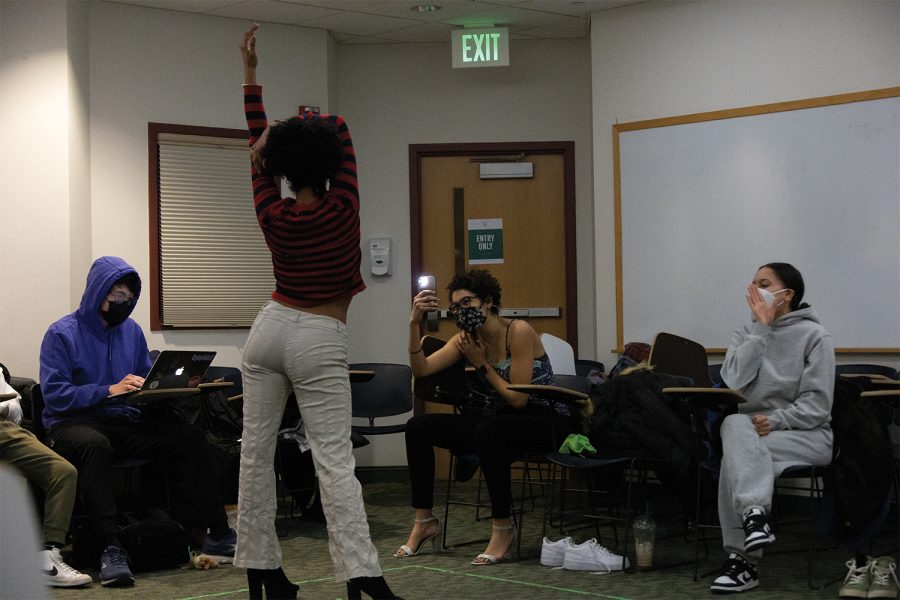 Behind the scenes of the BSU fashion show

For the past six weeks the Black Student Union has been working to prepare for its annual fashion show, said senior and BSU Student Adviser Zyakkiriah Rhoden.

The preparations began just before winter break. In the following weeks, the e-board of BSU reached out to designers, held auditions and rehearsals, organized finances and set up the stage, Rhoden said. The show was held in the Grand Maple Ballroom on Feb. 26.

Walk coach and graduate student Tristen Thompson said she invested at least 10-12 hours each week leading up to the show.

“Part of the passion that we as an e-board and myself personally get out of it is just seeing people that we look like be highlighted during a month that’s all about us,” Rhoden said.

The first step in organizing the show is reaching out to the designers. The six designers invited were a mix of Afrocentric designers and streetwear brands, mainly based in large east coast cities, Rhoden said.

After securing the designers, BSU held auditions for the show in early January. At these auditions, the e-board mostly looked for confidence and variety, Thompson said.

Forty-six models walked in the show this year, roughly twice the number of models that walked last year, Thompson said.

The week after BSU selected the models, they measured them, took pictures of them and sent each of the designers a file of their models. Then, the models rehearsed three hours a day, three times a week, for about a month, Thompson said.

Thompson focused on teaching the models to walk on tempo at the beginning of rehearsals. In the later practices, she focused on making sure the models knew the choreography. Confidence and quality developed over the entire process, she said.

The e-board and models collaborated in selecting the music, Rhoden said. The queue for the night was composed of an array of hip-hop and African artists such as Pop Smoke, Jacquees, Davido and  Popcaan.

The theme of the night was Black Print, meant to signify the blueprint Black creators have had historically on modern day art, senior and BSU President Miles McCallum said.

“Black people are the blueprint for a lot of creativity that happens in our society,” Rhoden said. “The show pays homage to Afrocentric prints and also streetwear prints, which is a combination of what Black people have created and cultivated, not only in the United States but globally.”

BSU worked closely with SGA to achieve enough funding to compensate the designers for their art, reserve their hotel rooms and transport them to the show, Rhoden said.

“The influence of Black artists in American history and in the American public’s imaginations today really cannot be understated,” McCallum said.

Being in the show was exhilarating, first-year and model Lazaria Harris said.

“We put in all this hard work and we finally get to show off,” Harris said. “You think you’re going to be prepared for the energy, and then actually hear the crowd you’re like ‘woah, I really am doing this.’”

The groups had been working on those performances since mid-January, said senior Liam Kinney, captain of the Catamount Dance Crew. The dance was choreographed by students in the dance crew.

“Before the dance, we were all very nervous but we’re very confident in ourselves too because we have been practicing and we know our worth as dancers and as individuals,” he said.

The show was MC’d by Jay The Entertainer, who performed comedy skits and made the crowd vow to be “lit all night.”

“I can’t even put into words the amount of joy that I get out of seeing our community come together,” Rhoden said.