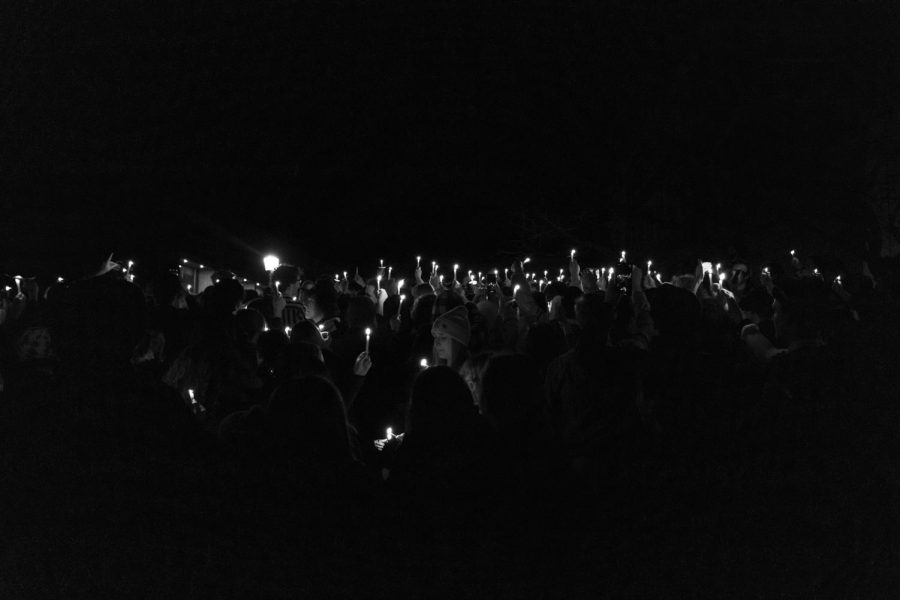 Around 200 students gather on central campus for the Bus Ball vigil April 23.

Bus Ball is a spherical sculpture depicting a traditional yellow school bus. Fisk installed it May 11, 2017 as a contracted loan to the University for three years, according to a Facebook post by the Fleming Museum of Art.

The installation was part of a public sculpture program spearheaded by former UVM President Tom Sullivan, said Fleming Museum Director Janie Cohen. The initiative began in 2013 and arranged for the University to install 12 outdoor sculptures across campus.

The ball formerly resided on a hill behind the Hills Agricultural Science Building, according to the Burlington City Arts Center’s Bus Ball webpage. The sculpture has a yellow-painted metal exterior and green imitation leather seating inside.

Fisk intended to remove Bus Ball in 2020, but the onset of the COVID-19 pandemic complicated the deinstallation process so he was unable to remove it until now, he said.

The University notified Fisk of nearby construction this spring, and he decided to permanently remove the statue April 18 to prevent damage, he said.

There was insufficient funding in Sullivan’s public arts program to purchase the piece, Cohen said.

“I was hoping [Bus Ball] could stay, but UVM wasn’t in a [financial] position to purchase it,” she said.

A group of students created an Instagram account, @busballvigil, with the intent of mourning the loss of the art piece, said sophomore Nick Noe, one of the administrators of the account. They first posted about holding a memorial gathering for the sculpture the day it was removed.

“It is with heavy hearts that we announce this memorial for UVM’s beloved Bus Ball,” stated a @busballvigil April 18 Instagram post. “Meet at the site of the former sculpture this Saturday for a service with heartfelt speeches and (possibly) the erection of a tombstone.”

The initial post received 830 likes and 94 saves by April 24, Noe said. The account also received at least 30 direct messages by April 20 from students excited about the event, other UVM meme accounts and the artist himself.

Fisk sent the account a direct message which stated that Bus Ball missed UVM, alongside a series of pictures.

Noe didn’t expect the post to garner attention so quickly, he said. Planning the event was complicated because the account’s admins didn’t know how many people would attend.

In preparation for the event, Noe and his friends purchased 200 candles, he said. They also prepared a headmarker which stated “R.I.P. Bus Ball.”

At the ceremony, the organizers read out a prepared eulogy about Bus Ball and passed out the candles. After that, students performed the traditional funerary call, “Taps,” on trumpets.

Following the performance, students lit their candles and paused for a moment of silence. The crowd then sang “Wheels on the Bus” in unison.

The event aimed to be satirical, but it had undertones of somberness, Noe said.

Instagram accounts @makeuvgroovyagain and @uvmjimbostickersofficial started a petition to bring Bus Ball back to UVM. The petition had over 700 signatures by April 24.

Fisk’s artistic theme is also somewhat satirical, BCA Center Director Doreen Kraft said. Each of his pieces plays on a trope of everyday American life and its cultural symbols.

“The underlying objective is to invite the viewer to recognize an iconic and recognizable subject in a new way,” Fisk said. “The spherical form is a nonsensical form for such a subject to take on.”

The spot where Bus Ball once resided will likely be converted back to lawn, Cohen said.

Sullivan’s outdoor sculpture initiative ended when he stepped down in 2019, Cohen stated in an April 22 email.

There is not currently any similar ongoing initiative from the University that Cohen is aware of to continue integrating public art on campus, she said.