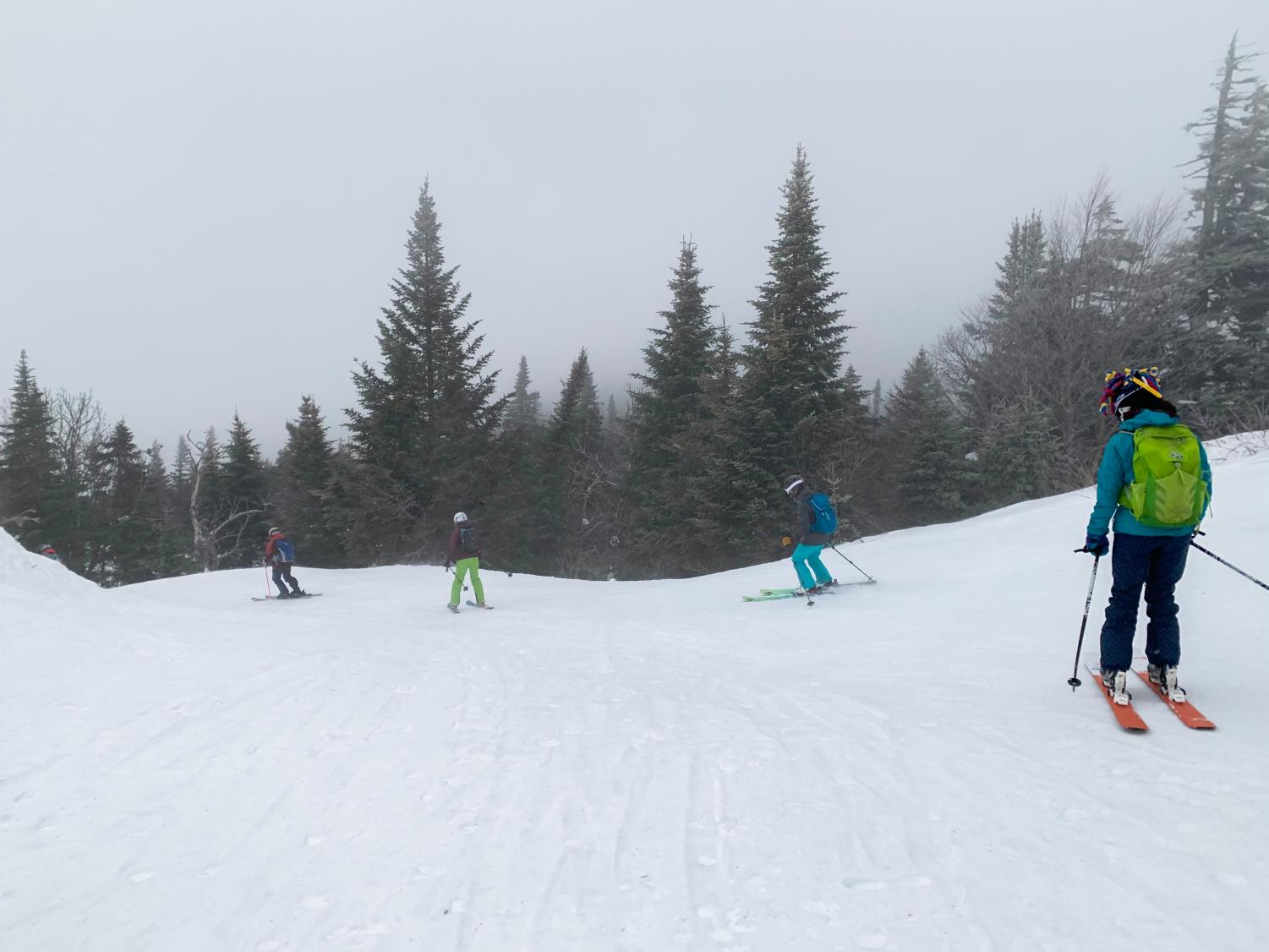 At around 5:00 a.m. March 4, a white van pulled into the parking lot of Gutterson Fieldhouse.

Junior Finn Brokaw, a group leader of Power through Powder, got out of the van and opened the back, revealing a pile of ski equipment. Ten women, geared up with backpacks and skis over their shoulders, piled into the rows of seats.

Chicks on Sticks is a coalition of female skiers and riders from UVM who promote female empowerment through snow sports. Emily Listowich ‘18, the club’s founder, wanted to create a space for women to ski and learn together in an environment that was less high pressure.

For the third year, Chicks on Sticks hosted Power Through Powder, a student-run skin-a-thon. Club President Emma Staff, a junior, said the group raised almost $16,000 before having to stop due to the COVID-19 outbreak,

Half of the money raised goes back into funding Chicks on Sticks; the other half goes to a charity of the club’s choice.

This year the club raised money for Protect Our Winters, a nonprofit that advocates for conversation and legislation regarding climate change.

As part of the fundraiser, club members hike up a trail by attaching special bindings to their skis for traction and removing them before skiing down. This is called “skinning.”

Chicks on Sticks members participating in Power Through Powder pay to rent the equipment used for skinning; bindings and skins. The group completes these skins so early in order to be back on campus in time for their morning classes.

Senior Ellie Diamond joined Chicks on Sticks as a sophomore because she was interested in getting outside with other women.

“It is a male-dominated sport like so many sports that we see,” Diamond said. “What’s so powerful about Chicks on Sticks is that it’s creating an environment for women to get together and feel confident and comfortable.”

The club introduced her to uphill skiing, she said, and for that, she is grateful.

“I now have my own setup and I go all the time,” Diamond said. “It’s definitely changed the trajectory in terms of hobbies that I like to do. It’s high on my list and that might not have been the case without Chicks on Sticks.”

Sophomore Anna Dolen, who joined Chicks on Sticks as a first-year, decided she wanted to get involved with Power Through Power as a sophomore. Her first time ever skinning a mountain was this year with the club.

“As hard as it was to wake up at 4:15 a.m., it was just surreal to meet everyone in the parking lot,” she said. “And to get to know everyone on the car ride there as the sun is coming up.”

At 5:45 a.m., the van pulled into Bolton Valley Resort and the women put on their ski boots. They found their skins and began sticking them to the bottom of their skis so they would have traction walking up the incline.

Besides the wind, the only source of noise at the resort came from 10 chicks on sticks, as they began hiking Wilderness, a trail extending to the top of the mountain.

“I had no idea how a skin worked when I first started skinning,” she said. “It takes a little while to get used to the physical motion of it. I just felt so much more connected to the land that I was skiing on. I felt like I had a better understanding of the places where I ski.”

Brokaw said her favorite part about Power Through Powder is getting to experience and help other women navigate backcountry skiing for the first time.

“I love that every single time more women can go skinning for their first time,” she said. “I love getting to share the sport that I love with more women. Anytime it’s someone’s first day, it makes my day; I just get so excited.”

By 7:24 a.m., the group had reached the peak of the mountain. The women peeled the skins off each of their skis and put them in backpacks. They then gathered in the ski patrol cabin to stay warm while they put on their outer layers and helmets.

After taking a group picture, the group went back outside, clipped their ski boots into their skis and started the journey down the trail. At 7:53 a.m, all 10 women had reached the bottom of the mountain and were loading their equipment back in the van.

“We are not only creating this community within ourselves and on-campus and in Vermont,” Brokaw said. “I really like how our mission statement extends to other non-profits and other people who are doing great work.”

Chicks On Sticks is growing in numbers each year. This year, 110 UVM women participated in the fundraiser, Staff said.

With more women wanting to participate in Power Through Powder, the club has had to rotate which group gets to use the equipment each week, she said.

After arriving back on campus, some group members go to their rooms to take naps; others prepare for their first class.