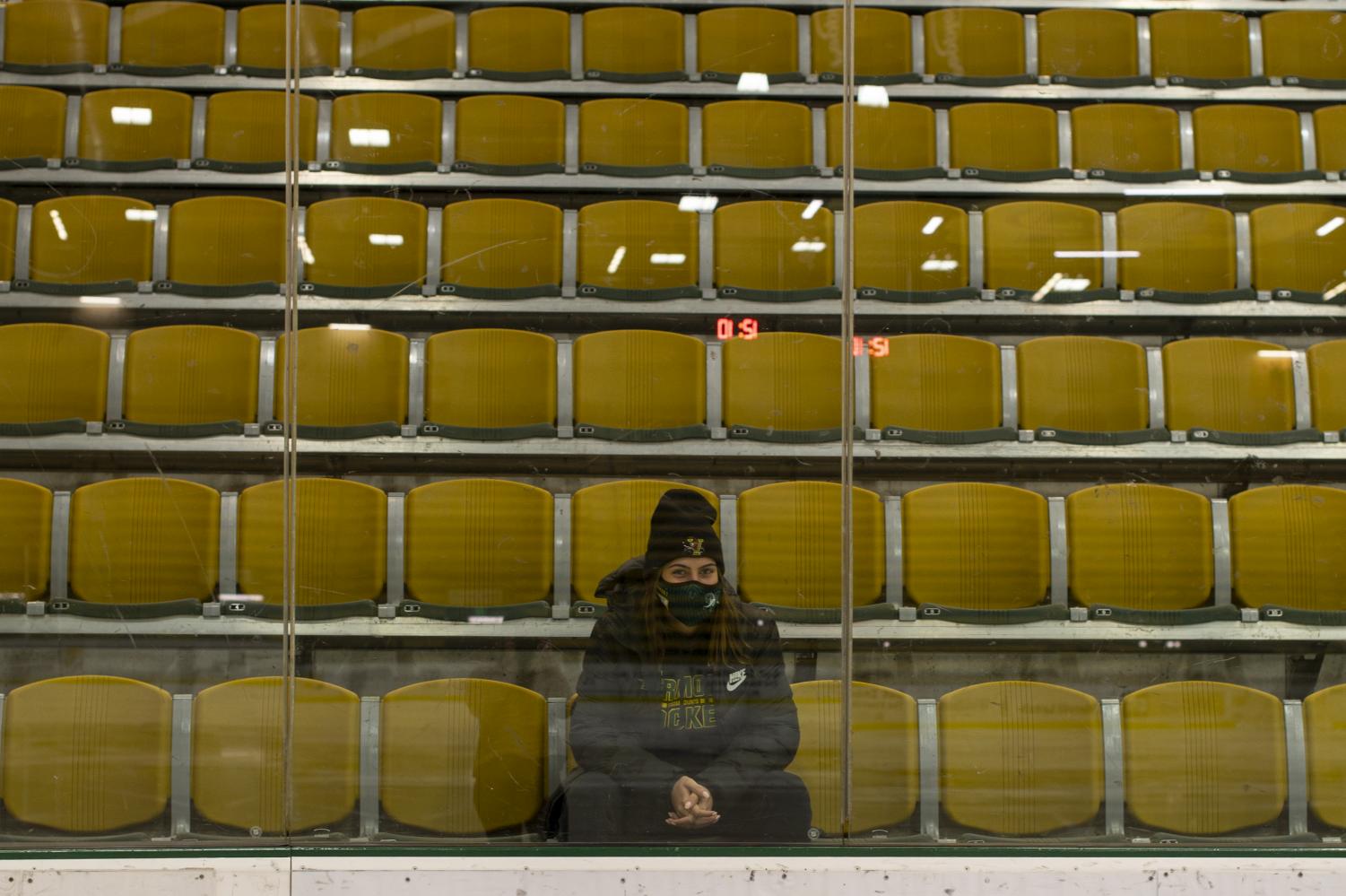 Sophomore Cam Morrissey sits in the empty bleachers of the Gutterson Fieldhouse Dec. 6. Morrissey trains with her team five days a week during the winter. (Kate Vanni)

Sophomore Cam Morrissey sits in the empty bleachers of the Gutterson Fieldhouse Dec. 6. Morrissey trains with her team five days a week during the winter.

A month before Christmas, Cameron Morrissey, a member of the UVM women’s hockey team, and her family decorated their Christmas tree.

The next day, Morrissey returned to UVM, for the entirety of winter break, away from her family.

Morrissey, a sophomore from Michigan, is one of 32 student athletes living in the residence halls over break.

Upon returning to campus, Morrissey moved her belongings from Converse Hall to an empty single in the sixth floor of Central Campus Residence Hall. All on-campus members of the women’s and men’s hockey and basketball teams will be staying in Central Campus for the remainder of the break.

According to Jeff Schulman, UVM’s Director of Athletics, unless they live in Vermont, Morrissey, her teammates and other UVM athletes cannot return to their homes this holiday season in order to follow Vermont State COVID-19 guidelines.

The cancelation of spring break next semester means that many of these athletes won’t see their families until next summer.

“It can be hard at times being here and missing out on a break with our families, especially around the holidays,” Morrissey said. “But this is what we sign up to do.”

Because the athletes won’t have a break from athletics and academics until next summer, some worry about their mental health. The Catamount Sport Psychology and Counseling services are offered to the student athletes year round, including this winter break.

“When you don’t have an opportunity to be away from school, being with your family or even other friend’s places, I do worry at what point that starts to have a significant impact on people,” Thorne said. “We know it’s having an impact already.”

Thorne said the students’ motivation stems from their eagerness to compete. However, some students felt anxious that they could be doing the work only for their season to be postponed or cancelled.

“‘Uncertainty’ is the word I keep hearing, which is really stressful [for the athletes],” Thorne said.

Morrisey said she is the only sophomore on her team living in the dorms, as the other four members of the women’s hockey team living on campus are first years.

“We don’t have cars,” Morrisey said. “Last year, two teammates had cars so we could go do stuff. It’s a little hard to get around and find things to do.”

All student athletes have breakfast delivered to their practices on a daily basis. In addition, the athletes are provided $20 per day, according to Schulman.

Though provided with a daily stipend for food and a room on campus, the solitude of 32 students in a residence hall with 695 rooms makes for an unusual experience during the holidays.

Aaron Deloney, a sophomore on the men’s basketball team, lived off-campus semester, and reflected on his mental health during his prior year when his team stayed in a hotel, rather than the dorms, for the break.

“Students staying in [the dorms] definitely might feel some of those mental health issues,” Deloney said. “I know last year when I was in that position I did.”

For many of these student athletes, this will be the first holiday season without their families. Sarah Wells, a junior on the women’s basketball team, is staying in her off-campus apartment to train with her team instead of traveling home to Canada to celebrate Christmas with her family.

“I am definitely sad I am missing the holidays with my family,” Wells said. “It was hard to accept at first, but I think I have come to terms with it. I keep reminding myself that this is temporary and things will eventually change.”

The shared disappointment of missing their families during the holiday season is matched with acceptance, as missing time at home is the only option for their winter seasons to commence.

“In talking to some of the student athletes, I get the sense that they are trying to maintain a positive attitude,” Thorne said. “They are trying to get creative and think about new traditions that maybe they start with one another or family members virtually.”

“It’s definitely going to be a rewarding feeling to finally play and something we’ve all been anticipating for months now,” Morrissey said. “All of us have been training for weeks on end, sacrificing holidays with our family, and to see something come out of it will be really fulfilling.”

On Christmas Eve, Morrissey will have practice in the morning at Gutterson Fieldhouse. After practice her team will have a gift exchange to celebrate the holidays. She will get Christmas day off before getting back to work to prepare for games against Holy Cross on Jan. 1.