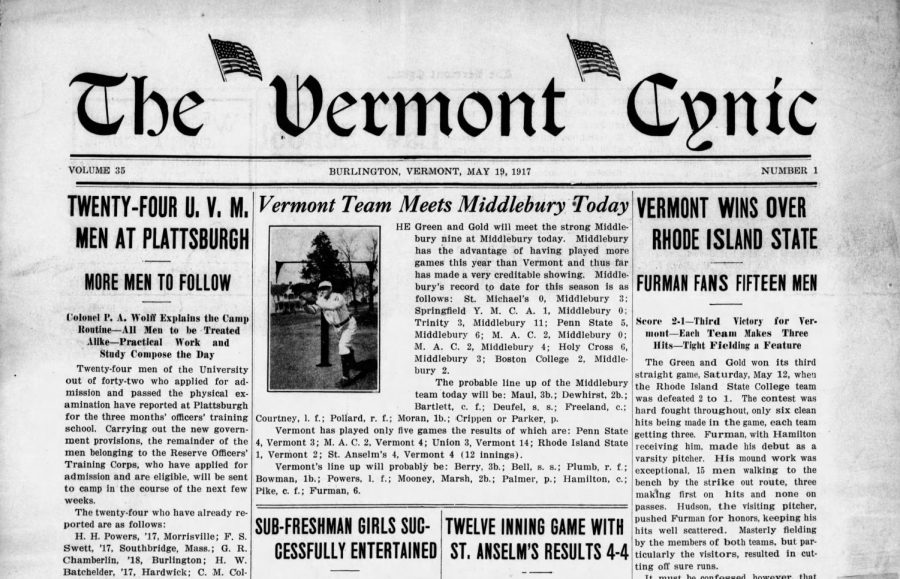 Top fold of the front page of the Vermont Cynic from May 19, 1917. The Cynic reported that the first ever orientation-like event for Vermont high school women had been held at UVM.

Cynic History: Reporting on the women’s suffrage movement at UVM

In celebration of Women’s History Month and the 100th anniversary of women’s suffrage, the Cynic searched its archives for stories that reported on how the movement took shape at UVM.

We found a handful of short briefs which, though sparse in their details, reveal that many UVM women in the late 1910s were intrigued by suffrage.

Like women at other universities, they formed suffrage clubs, hosted speakers and started discussions which collectively pushed the movement forward.

In the spring of 1916, the Cynic reported that Holden Weeks, a suffragist who had been an American delegate to the International Suffrage Convention in Budapest, Hungary, visited UVM May 3, 1916.

“Mrs. Weeks outlined the work of the national suffrage organization, its scope and influence and emphasized particularly the college woman’s responsibility to her own community,” a Cynic reporter wrote.

Weeks was one of 24 women the U.S. sent to the convention in Budapest. More than 20 countries were represented at the convention, according to the Library of Congress.

UVM’s College Suffrage Association appeared in the Cynic for the first time Oct. 28, 1916. The Cynic reported eight female students involved with the association acted in and produced a campus production of “Tommy’s Wife.”

During its 1916-17 session, six measures relating to women’s suffrage were brought before the Vermont Legislature, according to a 1979 article by historian Deborah P. Clifford.

While measures for universal suffrage were declined by lawmakers, Vermont suffragists claimed a smaller victory in the spring of 1917.

On March 21, 1917, the Vermont Legislature passed a bill that allowed women to vote in town meetings, making Vermont the first state in New England to allow women to vote in elections other than those relating to schools.

The passage of this bill was celebrated on UVM’s campus during a gathering of the Women’s Student Association, April 12, 1917.

Esther Magoon ’1917, president of the University Suffrage Club, explained the steps female students would need to take in order to vote in Burlington the next spring, according to an April 17, 1917 Cynic article.

On the same day, the Suffrage Club also hosted a tea, at which Emma MacAlarney, a Wellesley College graduate, was the featured speaker.

It’s difficult to pinpoint why MacAlarney was chosen as speaker; the article does not explain, and she doesn’t leave much of a historical trail.

Four years later in 1921, MacAlarney is listed as secretary on the board of managers that produced a “A Study of Opportunities for Women.” The report sought to prove women could handle more demanding careers, such as those in statistics, law and management.

On May 11-12, 1917, for the first time ever, UVM hosted over 125 women from Vermont preparatory schools at an orientation-like event.

The event was written about on the front page of the Cynic’s May 19, 1917 edition.

Every UVM woman was part of the program in some way, according to the Cynic article.

“All day Friday groups of college girls were at the Union station, meeting the various trains and welcoming the high school students,” according to the article.

After dinner was served in the gymnasium, Mabel F. Derway ’1917, president of the Women’s Student Association, made introductory remarks.

“Tommy’s Wife” was again presented by the Suffrage Club and reportedly received much applause from the audience. Between the play’s acts, a series of dances and songs were performed.

In the same edition, the Cynic staff editorial was devoted to congratulating the University’s women on the success of the event.

“Much credit must be given to the originators of the idea and also to those who carried it out so successfully,” the editors stated. “In the few years to come, the University may be obliged to depend upon its women.”

1917 was a year of progress for both Vermont women and for the suffrage movement as a whole.

Beginning in the winter of 1917, numerous American women protested outside of the gates of the White House in Washington, D.C.

Although many of the protestors, known as the Silent Sentinels, were arrested and imprisoned, their actions were documented by the media, bringing their cause to the national stage.

Among those arrested was Lucy Daniels, from Grafton, Vermont, according to historian Marilyn Blackwell. Before traveling to Washington, Daniels and her sister protested their disenfranchisement by refusing to pay their Vermont property taxes.

“They are both women of world fame,” according to a Cynic report at the time.

Catt and Wilson met with UVM women at a tea hosted by Pi Beta Phi and Kappa Alpha Theta.

“The talks were especially interesting in the way they came close to a college woman’s viewpoint,” the Cynic stated.

The next year, on Aug. 26, 1920, women’s suffrage was officially adopted into the U.S. Constitution.

The 19th amendment was adopted without ratification by the Vermont Legislature. Vermont did not officially ratify the amendment until Feb. 8, 1921.

Note: The Vermont Cynics from which these clippings were pulled were all led by male editorial boards.  In all of the editions cited here, the editor-in-chief was a man. Though not unexpected for its time, the fact that the Cynic of the early 20th century was led by men, perhaps explains why women’s issues were covered so sparingly. The Cynic staff of today knows that our identities inevitably shape our reporting — but even so, we know our pages must reflect everyone who calls UVM home.