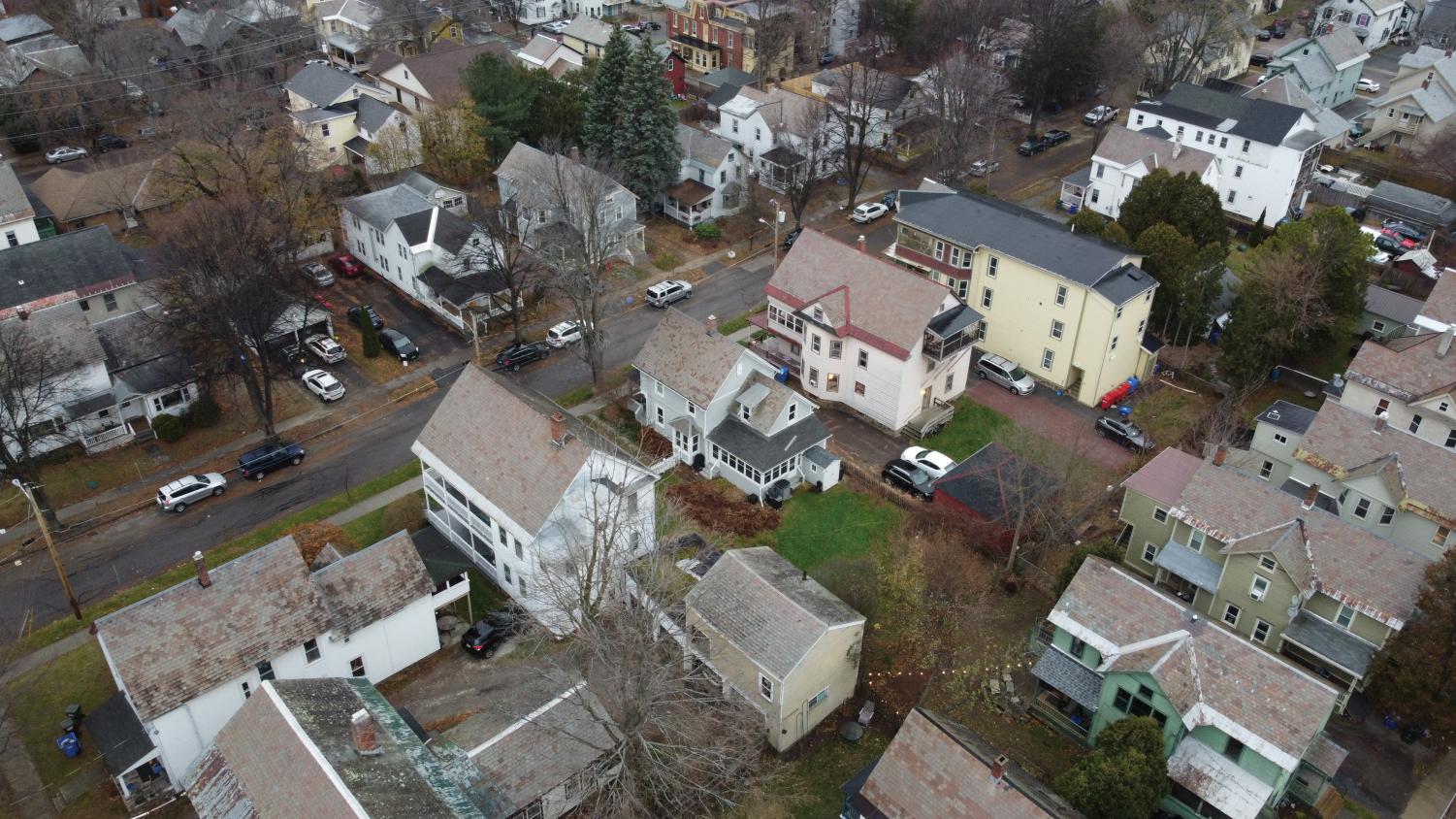 The Old North End as seen from a drone Nov. 27. There is a housing crisis in Burlington, specifically due to high numbers of students searching for off-campus rentals after fulfilling their two-year on-campus residency requirement. (Mac Mansfield-Parisi)

The Old North End as seen from a drone Nov. 27. There is a housing crisis in Burlington, specifically due to high numbers of students searching for off-campus rentals after fulfilling their two-year on-campus residency requirement.

UVM students have put strain on the Burlington housing market because they, as a group, are able to afford more costly rent prices, said Michael Monte, executive director of the Champlain Housing Trust.

“We have seen UVM beefing up enrollment and not necessarily keeping pace with on-campus housing,” said Chris Pearson, Chittenden District state senator. “No one has really had the political courage to take UVM on from my point of view.”

UVM is talking about building more housing but so far that ongoing dialogue has not brought additional undergraduate dorms to fruition, Pearson said.

“UVM has two major housing initiatives underway, we are seeking zoning changes from the City of Burlington for the Trinity Campus, which would allow for the construction of over 500 beds of housing [for undergraduate students] on that site,” stated UVM Spokesperson Enrique Corredera in a Nov. 28 email to the Cynic.

The University has also partnered with a local developer to build nearly 500 beds worth of housing in the area known as City Center in South Burlington, Corredera stated. While construction of this project begins next spring, UVM is also exploring other potential housing options in the area.

City Center will be available to UVM graduate students, faculty and staff, according to a Sept. 6 UVM Today article.

Students living off campus put a lot of pressure on the rental market in Burlington, resulting in the city’s rent prices going up, Pearson said. Housing is increasingly out of reach for the broader Burlington community, including for many students at UVM.

“It’s a really bad dynamic and no one has offered a cogent proposal to shift the dynamic,” Pearson said.

Lauren Walsh has been navigating the Burlington housing market for the past few years after she graduated from St. Michael’s College in 2019, she said.

“I don’t think individual students are creating these housing issues,” Walsh said. “The University is seeing record numbers of applicants and allowing more students into the school, but Burlington didn’t add more housing.”

When Monte worked at the Burlington Community and Economic Development Office, the conversation was focused on how they could get UVM to do more, he said. CEDO spoke directly with UVM to create a series of agreements that asked UVM to continue to house a certain percentage of undergraduate students.

“We would always say that [students] were impacting the overall housing market to a significant degree, so much so that rents were higher because of the demand that students made on the market,” Monte said.

Older UVM transfer students and anyone who has fulfilled their two-year on-campus residency requirement are eligible to live off campus, according to the UVM Residential Life Website.

While the University provides housing for around 60% of its undergraduate students, it is actively searching for opportunities in partnership with the city to address housing concerns, according to a Nov. 11, 2021 Cynic article.

College officials and community members alike also see the need for all students to have access to affordable housing, Monte said.

UVM and the mayor’s office have tried to work collaboratively to build some kind of relationship that would provide housing for students, said Virginia Lyons, Vermont state senator.

“Housing has some ripple effects that go beyond just what it means for students, but students play a big role and the University should be playing a big role in finding some solutions,” Pearson said.

Pressure should be put on UVM to build more on-campus housing in an effort to alleviate some of the pressure in the rental market downtown, which might help stabilize or bring prices down, Pearson said.

“I have heard from a number of UVM students that the price of housing and the housing itself may not be in the best repair,” Lyons said. “It sends a bad message out to the broader community about how we are providing for students.”

Junior Willow DeVoe-Talluto’s apartment is located in the Old North End, where she lives with three other friends, she said.

“What was most surprising was how quickly everything adds up,” DeVoe-Talluto said. “We knew our rent was already a lot. On top of that, we pay for gas, electricity and Wi-Fi. It’s not just rent, it’s everything that comes with it.”

DeVoe-Talluto and her roommates pay about $3,600 in rent monthly for four people, she said. It amounts to $900 per person, not including utilities.

“I have bursts of a few hundred dollars that I make from pet-sitting, but nothing consistent,” DeVoe-Talluto said. “I would not be able to live here if I didn’t have support.”

Rent at DeVoe-Talluto’s apartment is being increased by $100 per person next year if she and her roommates stayed, she said. However, if new tenants were to take the apartment, the rent would be increased even more.

“It’s not just a UVM problem—it’s an entire Burlington problem at this point,” DeVoe-Talluto said.

DeVoe-Talluto, like many people, is not sure what the solution is to the student housing crisis and the housing market in general, she said.

“I have lived in my current apartment since May 2021,” Walsh said. “When I was looking for apartments, I found that if I didn’t apply and make a decision about signing a lease within two days, it would get taken by someone else.”

After living in her apartment for just 3 months, the landlord asked if she wanted to re-sign the lease for June 2022, or he would start showing it and looking for new tenants, Walsh said. She resigned because she didn’t want to lose her apartment and not be able to find a new place to live.

Although UVM and the city are still looking for solutions to the housing crisis, Lyons is optimistic this problem can be solved together as a community, she said.