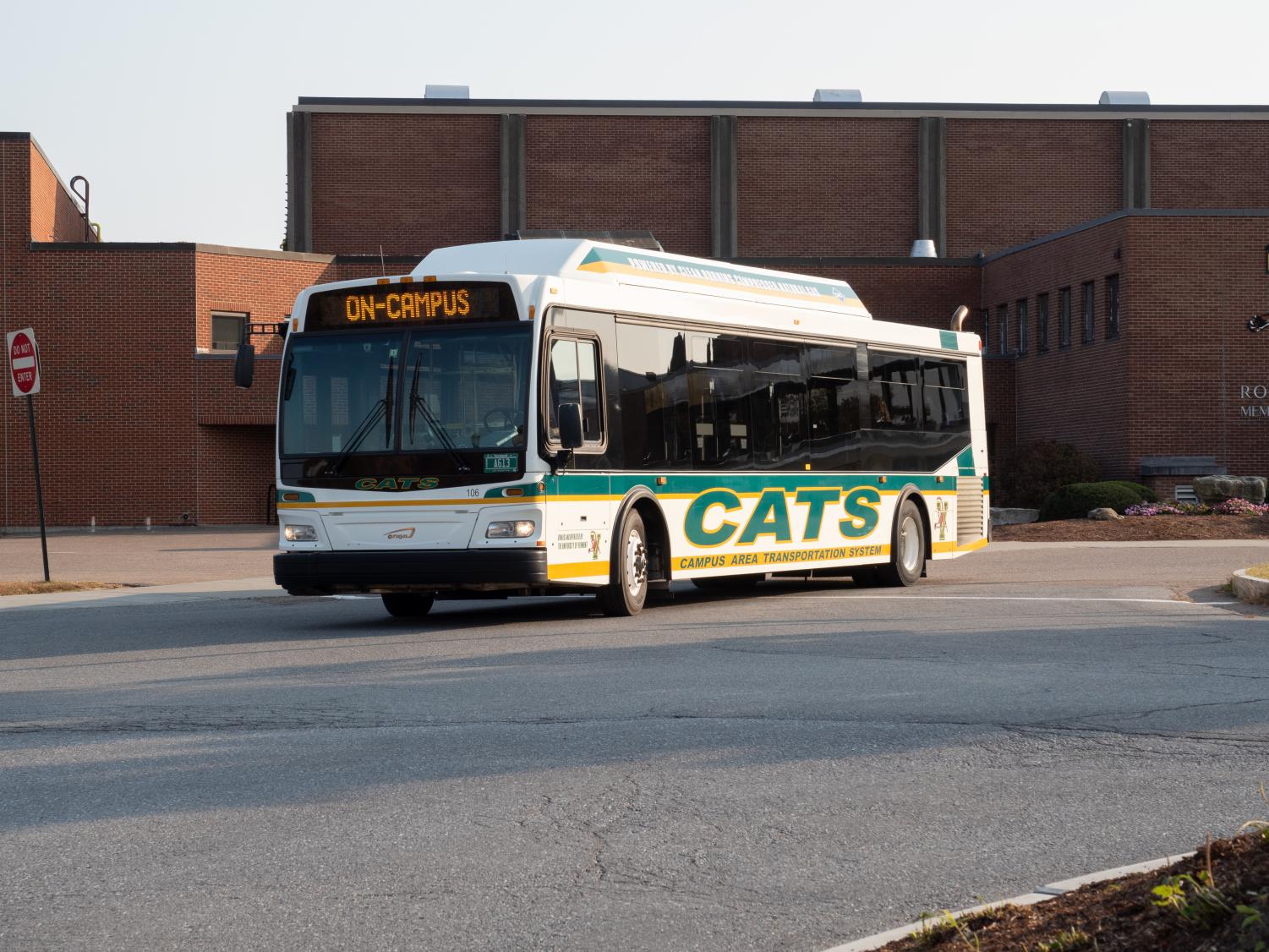 Seven months ago, Catamount Area Transportation Busses rumbled down campus roads, packed to the brim and alive with conversation. Now, its ridership caps at 14.

COVID-19 changed many aspects of UVM’s campus, and the on-campus bussing system is no exception. Both CAT Bus drivers and UVM students adjusted their lifestyle to the altered policies beginning this Fall semester.

Some changes include limited hours, reduced capacity, and plexiglass barriers both between seat sections and to protect the drivers, according to an email from Director of Transportation, Parking, and Sustainable Transportation Services Jim Barr.

“Ridership capacity is limited due to social distancing measures, and thus far riders have complied with all of our protocols, and have not exceeded capacity restrictions,” Barr wrote in an email.

These precautions prevent the potential spread of COVID-19, but also result in less of a social work environment for CAT bus drivers.

Joe Sweeney, a Burlington native, has been driving for UVM Transportation for over 10 years. He views the difference between this semester and those previous as staggering.

Even with the changed environment and increased risks, Sweeney was glad to get back to work after months of the campus being closed.

Not only has behavior on the busses been compliant with COVID protocol, but the students he passes on his routes are also wearing masks and social distancing, Sweeney said.

“It’s a rewarding job, believe it or not. It’s only driving a bus, but you know you’re doing something that everybody needs you to do, and they appreciate it,” Sweeney said.

Like Sweeney, sophomore Chloe Hendron views the bussing system as more than just a convenience, it builds community. She felt pleasantly surprised to hear that the busses would continue operation this semester.

“I thought they wouldn’t use the buses at all,” Hendron said. “I’m surprised that we have them.”

More students may want to take the busses when temperatures drop, and Hendron said she wonders how this will impact the already compromised system. In connection with these restrictions, Hendron’s personal experience with the CAT Busses has also shifted.

“One of my favorite bus drivers drove the late night route,” Hendron said. “He would play rock music and sing along. I loved it, it made riding the bus really fun. Unfortunately, I haven’t seen him as much anymore this semester.”

CAT busses provide an easy way to get to and from class, but one of their biggest roles is keeping students safe, especially at night and on the weekends.

“Instead of walking back from Redstone in the dark, I could take the bus,” Hendron said. “It was a safer option, and it made me feel much more comfortable.”

In past semesters when the CAT shuttles operated normally, some students found other reasons to take the busses other than necessity alone. Hopping on a campus bus, especially on a weekend or during the evening, makes students feel a part of a community, Hendron said.

Paul has been driving the CAT Busses and CATSride vans for ten years. He had already been working with UVM when he got his commercial driver’s license, so he switched to driving busses.

“It’s nice to have contact with people during the day,” Paul said.

Some members of the Burlington community were surprised that UVM was re-opening this semester at all. Paul, a native of Chittenden county, echoed some of these concerns.

“I was a little apprehensive about thousands of students coming back to campus from all over the country, but I was open to the idea,” Paul said.

The return of in-person class and on-campus students allow Paul to continue driving the CAT Busses, even if the system looks different than its original busy, conversational, and communal environment.

“I think we’re still all a little concerned, but it looks like, so far, people are doing the things that they need to do to keep the virus down,” Paul said.

Despite potential anxiety regarding re-opening, UVM reports 21 positive COVID-19 tests of on and off-campus students, according to the Weekly Testing Report.

No one has reported transportation problems regarding bus capacity, mask wearing, and other policies, according to an email from Barr.

Despite all of these changes, the sense of community students and drivers feel using the CAT busses hasn’t seemed to waver, even if they’re feeling it in smaller numbers and through plexiglass barriers.