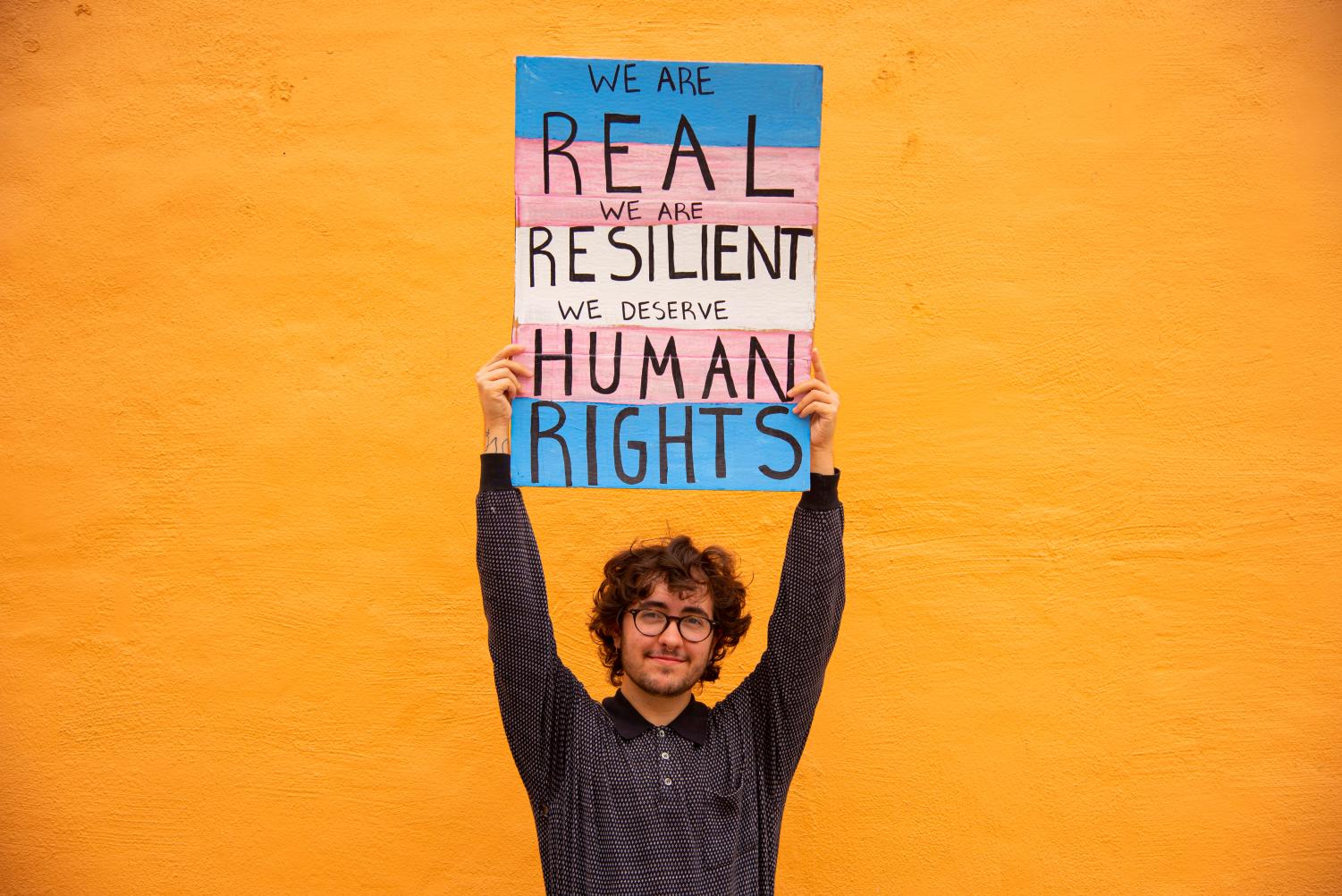 Alex Excaja-Heiss proudly holds up a poster he made for transgender rights July 15. (Kate Vanni)

Alex Excaja-Heiss proudly holds up a poster he made for transgender rights July 15.

UVM junior named one of “20 Under 20: Young LGBTQ People Shaping the Future of Media and Activism”

Around the age of 14 Alex Escaja-Heiss boarded a plane, when he got off, he had been changed by a single moment during the flight.

On the flight, he had watched a film called “My Prairie Home”, which he said is about a nonbinary artist. It gave him a sense of empowerment that he said he had not experienced before.

“From that moment on I really wanted to create content like that for others,” he said. “That was the moment when I wanted to dedicate myself to doing this in the future.”

Now at age 20 Escaja-Heiss identifies as transgender and has been featured on GLAAD’s Rising Stars 20 Under 20 list which spotlights 20 young LGBTQ people who are 20 or younger, according to GLAAD’s website.

The honorees are people who accelerate acceptance for LGBTQ people while shaping the future of media and activism, stated the website. GLAAD’s inaugural 20 Under 20 list is presented exclusively by Teen Vogue.

Six years before receiving this honor Escaja-Heiss was beginning to come to terms with his own identity.  He started to access resources at Outright Vermont, a non-profit organization dedicated to LGBTQ youth empowerment.

“Outright Vermont has these Friday night support groups for LGBTQ youth,” he said. “And that was the first time I was engaged in a community that validated me and understood me.”

The non-profit includes some of Escaja-Heiss mentors who were the first LGBTQ adults he had met in his life which, Escaja-Heiss said was quite inspirational.

“They were working professionals, healthcare workers, teachers and social workers,” Escaja-Heiss said. “That gave me confidence in my own filmmaking because they knew it was possible to do anything while also being queer.”

A couple of years after becoming comfortable with his identity, Escaja-Heiss made what he said is a reason why GLAAD chose him for the 20 under 20 nomination, his film “Looking Back at Me.”

In this film, Escaja-Heiss tells the story of Sade Bolger, an 18-year-old from Vermont who came out as non-binary.

Escaja-Heiss went to high school with Bolger and he knew that Bolger was comfortable on camera.

“Because it was just me and just him, the experience of this film felt like a collaboration,” he said. “It brings an intimacy that shows up in the movie and I think also makes audiences connect to it more than perhaps a simpler 101 training video.”

Escaja-Heiss said he was either 16 or 17 when he made the film, and he appreciates the age at which he did it.

“As I made this, I’d recently made the decision to want to get involved in filmmaking,” he said.

Escaja-Heiss said he took inspiration from My Prarie Home, wanting to create a story of a non-binary person in a complex and realistic way, but he also wanted it to be educational and something that non-binary people and other trans people could relate to.

Escaja-Heiss said he believes media representation can have enormous effects on the ways that people and particularly marginalized identities are treated in society, both socially and legally.

One of the main goals of Escaja-Heiss’s filmmaking is to show marginalized groups in a positive way – something that can have huge ripple effects.

“Seeing yourself on a screen as someone who is happy and who can have a fulfilling life brings hope,” he said. “It teaches people who aren’t in the community what it’s actually like, I think it can help combat a lot of prejudice and stereotyping.

Escaja-Heiss is double majoring in Film Studies and Gender Studies, two programs that he believes are absolutely going to be applied to his future filmmaking.

“UVM has shifted the way I do things, but it also has given me a lot of opportunities and a lot of knowledge that I just did not actually have access to before,” he said.

Despite his continuous effort to help others be comfortable with their identities, Escaja-Heiss still struggles with insecurities as to how people perceive him, and if they see him as a real and valid person.

“If I get too wrapped up in wondering if those around me will see me as real, then it stops me from truly being myself, regardless of how people might perceive me,” he said.

Escaja-Heiss wants to actively work at overcoming his insecurities.

“I want to put a lot of effort into reminding myself daily of my worth and my validation and of my community,” he said. “Regardless of how people who don’t understand me, may treat me.”

But at the same time, Escaja-Heiss’s identity is one of the things that he is the proudest of.

Despite being featured in a Teen Vogue list and awarded numerous times for his films, Alex Escaja-Heiss would not call himself a celebrity.

“I’m still very local,” he said with a chuckle. “Even though some of my friends are now kind of poking fun at me, asking for money and my autograph.”

To him, being named on the list was a complete surprise.

“I’m really grateful and honored,” he said. “I feel a lot of gratitude for my younger self because I don’t think my younger self would have imagined receiving an honor like this in the future for the work that I was doing at the time.”

For what is coming next, Escaja- Heiss said that he is on track to graduate early, part of that includes an honors thesis project, which is a short film – his first one since Looking Back at Me.

“It’s still in the works,” he said. “My intention for it is to be an expression of the things I’ve learned in my film and gender studies, so I want to try to apply both of those things in a multidisciplinary way into one short film.”

After he graduates, Escaja- Heiss is hoping to return to New York City, where he spent last semester on a study abroad program before COVID-19 hit.

“I would like to jumpstart into a career in the film industry,” he said. “I’m so excited to enter the workforce in 2021, and start really dedicating my time to making representational and empowering LGBTQ films and media.”