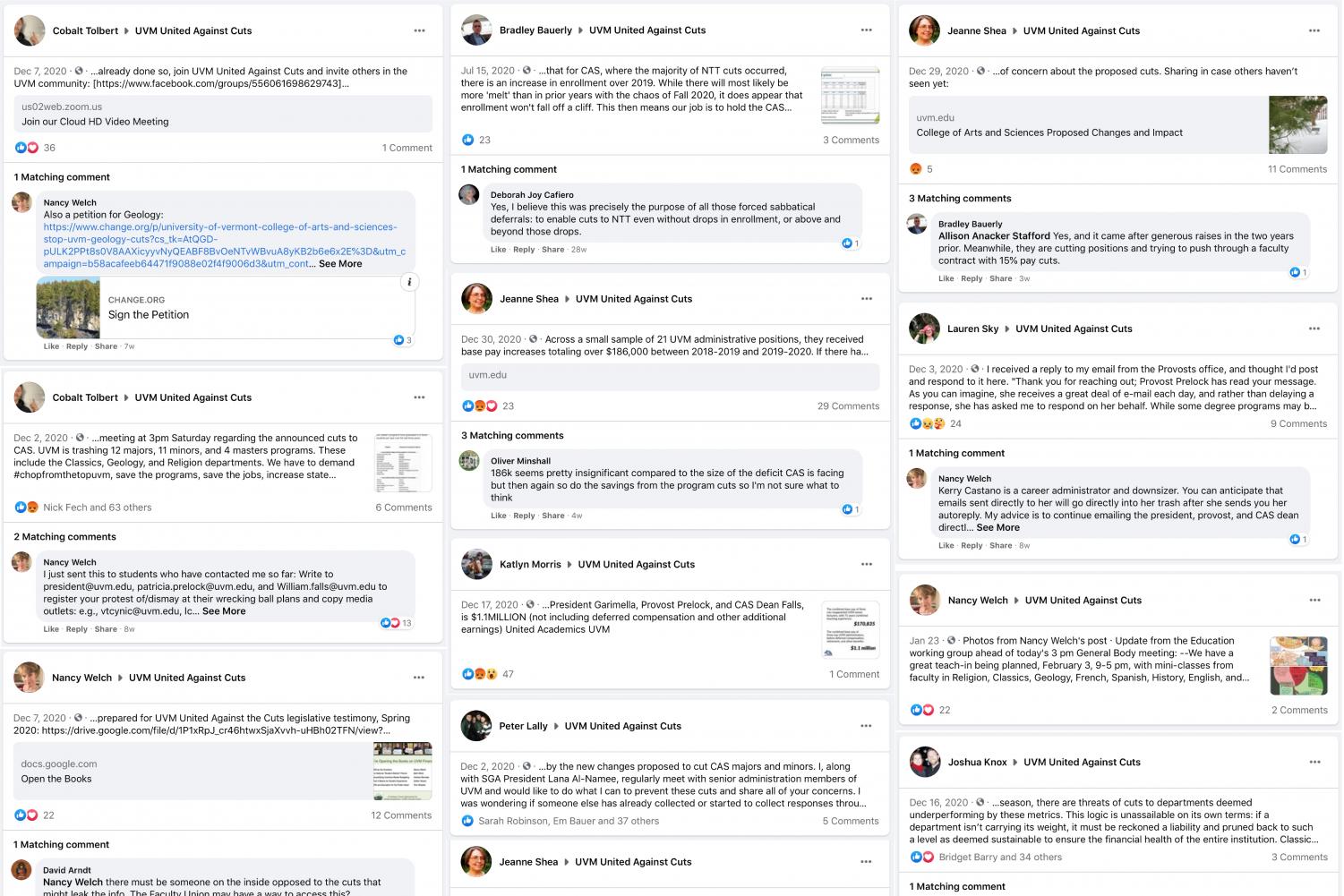 Despite outcry, administration pushes ahead with gutting liberal arts at UVM

Over the last two months, outraged students and faculty have continued to push back on administrators’ decisions to cut low-enrollment programs in UVM’s College of Arts and Sciences.

Just before the end of the fall semester, UVM’s English Department announced that they had unanimously voted no confidence in the UVM administration Dec. 15, and demanded CAS Dean Bill Falls to resign after a decision to cut CAS programs.

The decision to phase out 12 majors, 11 minors and four masters’ degree programs due to an $8.6 million deficit was announced by Falls Dec. 2. The classics, geology and religion departments will be terminated entirely.

Students and faculty expressed their anger and sadness about this decision, responding with pushback on social media, creating petitions against the cuts and written op-eds and letters to the administration.

Many faculty members were particularly discouraged by the lack of communication from the administration, said Professor Julie Roberts, president of United Academics, UVM’s faculty union.

Faculty were informed of the decision to cut programs on the same day as students, and were not involved in the decision-making process at all, Roberts said.

“In academia, in general, it is very important to have shared governance in which the faculty and the administration work together, particularly in areas like curriculum where faculty are the primary experts,” she said. “In this case, shared governance was completely bypassed.”

“I wish I could have thought of a way to do it differently. But I had to put the proposal out there and get feedback after, as opposed to going to folks and saying, ‘hey, we’ve got an $8.6 million deficit, who wants to close their department?’ ”

Falls said that he chose not to consult faculty before announcing because he did not think they would be able to have a productive conversation on a proposal that included closing programs and departments.

“I know the importance of collaboration with faculty around decision-making,” he said. “But we had to consider opportunities to close a sizable budget gap, and I honestly couldn’t think of a way to have a productive discussion involving faculty who could potentially suffer loss.”

Falls said that though it was an agonizing decision to make, he decided he had to move forward.

“I wish I could have thought of a way to do it differently,” he said. “But I had to put the proposal out there and get feedback after, as opposed to going to folks and saying, ‘hey, we’ve got a $8.6 million deficit, who wants to close their department?’”

Other faculty members also expressed disappointment by the lack of communication between administrators and faculty.

“There’s an awful lot of very thoughtful, committed and passionate folks at the University, not just the administrators,” said Jacques Bailly, associate professor in classics, in a Dec. 9 interview. “I understand it’s difficult, but University decisions ought to involve the faculty.”

“I think the most important thing is to figure out how to do this so it’s inclusive of the faculty because, without faculty, there’s no University,” Bierman said. “Administrators can do whatever they want but without us, students don’t get an education.”

Some students said that programs like religion and foreign languages are valuable for teaching cultural diversity.

“These programs raise awareness of xenophobia, racism and sexism,” Holden said. “It’s sad to see a University that claims to be such a diverse school get rid of programs that have the most to do with other people’s cultures.”

Senior Cobalt Tolbert, a student activist and organizer of UVM United Against Cuts, also said that the programs to be cut are crucial to encouraging diversity both inside and outside of the University.

“Cutting language programs and religion will be bad for promoting well-rounded educational opportunities for people from marginalized backgrounds,” Tolbert said.

One petition to save the religion department, created by Katherine Brennan, a UVM senior and religion and French double major, received nearly 4,500 signatures as of Jan 31. Over 1,500 of those signatures were gained only 24 hours after the decision was announced.

“These professors have shaped who I am and they’re all really incredibly important to me,” she said. “The very least I can do as a student and as a person is to fight for them to be able to keep their jobs.”

“When I first heard about the decision, I was so outraged I was seeing red,” she said. “I feel like the dean is saying that my interests don’t matter and the interests of all of the other religion majors over the years don’t matter either.”

These professors have shaped who I am and they’re all really incredibly important to me. The very least I can do as a student and as a person is to fight for them to be able to keep their jobs.”

According to an FAQ sheet sent to students by Dean Falls, cutting programs will save the University “in excess of $600,000” during a time of financial need. CAS has a structural budget deficit of $8.6 million in the current fiscal year, exacerbated by the COVID-19 pandemic.

Professors who taught in the terminated departments will now help teach general education and Honors College courses, according to the CAS FAQ page.

Some students and faculty members disagreed, however.

Roberts also disagreed with Falls. “I fail to see how eliminating classics and religion in any way strengthens liberal arts,” she said.

Moving forward, United Academics will work to support the Faculty Senate as Falls’s proposal goes through the senate to be approved or disapproved, Roberts said.

Having faculty teach in other related programs will also help strengthen CAS as a whole, Falls said.

“An outstanding faculty member in a small program like geology now has the opportunity to get jazzed about teaching in a larger program like environmental studies, which will also cut opportunity costs,” he said.

The vision of the University of Vermont is “to be among the nation’s premier research universities with a comprehensive commitment to a liberal arts education, environment, health, and public service,” according to the UVM website.

Tolbert said that administrators should reconsider their priorities.

“The focus of a school should be on actual education,” Tolbert said. “There’s a continuously steady shift in priorities that essentially puts the Board of Trustees and other administrative positions before the teachers and students.”

In contrast, Falls said that administrators were prioritizing students. Cuts in low-enrollment programs will allow for redistribution of resources, including money and faculty members, to programs with higher demand, he said.

“Programs that are very heavily enrolled like chemistry or psychology are down in faculty too,” he said. “So when you know we’re putting resources into two or three students in Greek while we’re starving for resources in areas where there are hundreds of students, it becomes a real challenge.”

While the students in low-enrollment programs are also important, it’s difficult to manage without a balanced budget, he said.

Many of these high-demand programs are related to STEM or social sciences because of an overall shift away from liberal arts, Falls said.

However, funding and supporting the liberal arts at UVM is crucial even with lower demand and a budget deficit, Professor Bailly said in a Dec. 9 interview.

“Liberal arts allows students to follow their interests so they become interested and interesting people in the human world around them,” Bailly said. “It provides a broad toolkit with transferable skills to many careers.”

Liberal arts also allows students to explore without focusing on one career, Bailly said. “I’m sure there are people whose sole passion in life is nursing or marketing,” he said. “But most people have a great smorgasbord of things they’re interested in.”