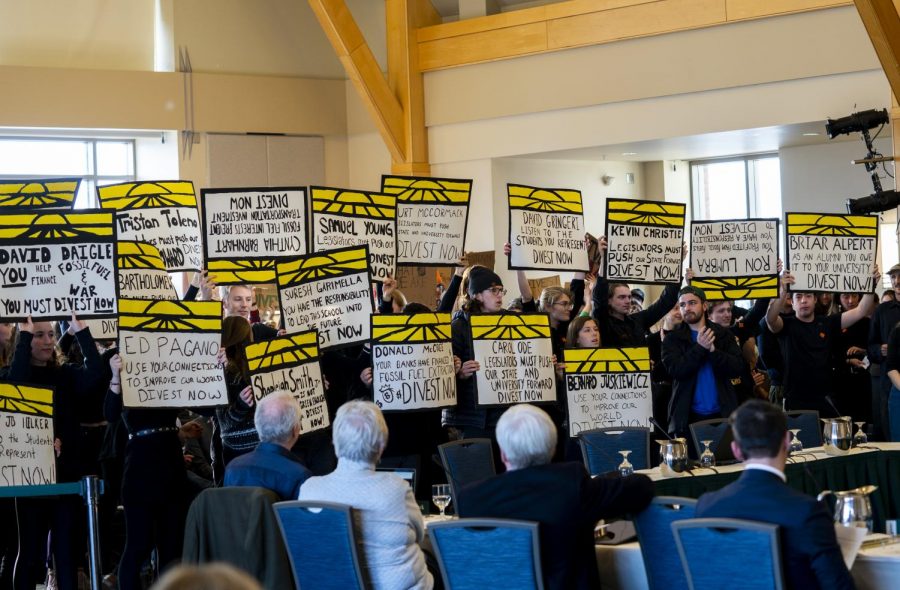 After two demonstrations by student activists over the span of three months, at least one UVM trustee has said he’s ready to divest.

Students from organizations including SGA, the Sunrise Movement and Organize, a group advocating against UVM’s $27 million investment in fossil fuel companies, filled the Silver Maple Ballroom on the fourth floor of the Davis Center to request the board divest from fossil fuels.

In an email from Vermont Rep. Curt McCormack, a trustee on the board, that was sent to the entire board just before 5:30 p.m. Jan. 31, he stated he was ready to divest.

“I think the time has come to put this behind us and do the divestment because we are being asked to,” the Jan. 31 email stated.

McCormack wrote in the message that he hopes young climate activists will continue to change the planet, the email states.

Here is the text of the full email:

Hi Corrine,
Please forward this email to the whole Board of Trustees. Thank you.

After our meeting today I learned that there were two different and unaffiliated groups who came to urge us to divest in fossil fuels. The first is called Organize and the second, Sunrise. Organize gave us the excellent testimony and Sunrise was the one that sang, wouldn’t stop and held the signs.

I have never been against divestment. I have been against spending any time and energy on it. It does not reduce greenhouse gas emissions by one ounce and I have regarded the movement as a major distraction from the real, less sexy issues of climate change.
I am for things that do reduce emissions. But I think the time has come to put this behind us and do the divestment because we are being asked to. And I hope that with divestment those serious activists, those who spoke to us, not those who sang to us, will continue to work against climate change in the many ways that reduce emissions and transform our energy systems.

Prior to the email, McCormack and the rest of the board faced a crowd of at least a hundred people in the Silver Maple Ballroom.

By the time the public comment period started at 2:30 p.m. at the Jan. 31 meeting, the ballroom had run out of seats, forcing students to stand or sit on the floor.

UVM Police Services officers stood at either side of the board, which sat behind a green fabric rope, separating it from the crowd of its constituents.

Junior Ben Wagner on behalf of Organize addressed the board first.

“Our University’s vision statement is ‘to be among the nation’s premier small research universities preeminent in our comprehensive commitment to liberal education, environment, health and public service,” Wagner said. “How can we make this statement while still directly investing $27 million into fossil fuel companies?”

Following Wagner’s speech, professor of geology Paul Bierman was called up to speak.

“I’m here today to say it’s time to look again at the evidence to trust the scientists, policymakers and economists on this campus,” Bierman said. “To listen to the voices of our students who are sitting behind me here and our responsibility to the environmental university that we claim that we are.”

Bierman said after the event that if UVM were to divest, they wouldn’t really take a huge economic hit.

“The losses UVM could sustain, if any, are really trivial, and they may in fact do better,” he said. “As one of the premier environmental universities in this country, we got to walk the talk. We don’t just teach the environment to thousands of students in a year, we do something about it.”

Junior Sophie Smith, chair of SGA’s Committee on the Environment, introduced a resolution urging the board to divest from fossil fuels at a Jan. 21 SGA meeting. Smith spoke  to the board about divesting and her disappointment with the lack of action.

“In October, we were applauded for our professionalism,” Smith said. “Yet we were not met with the open dialogue that was promised to us to maintain the formal relationship we have established and the respectable image of the board.”

Following Smith’s speech, which called on the board to divest, the protesters erupted into song.

One protester, first-year Sam Peck, who is unaffiliated with Sunrise, took a seat in the middle of the board of trustees’ tables that were shaped in a “U” before Smith started speaking, silently holding up a whiteboard with a message calling on the board to divest.

After, Board Chair David Daigle called a five-minute recess, and Peck was removed by UVM Police Services. The protesters then began to leave, still singing on their way out.
The recess did not last, and the meeting resumed as the protesters began to leave.

But the protesters did not leave the room for long.

Several minutes later, Sunrise group members stepped back into the room, standing silently in uniform with signs calling out the trustees by name.

Bierman said he was disappointed with the number of police that were at the meeting.

“I was very unhappy with the number of the police there, they were clothed, and it was to me a show of force, along with the barricade that separated the board of trustees from everybody else,” he said. “I don’t think that’s the Vermont way. I don’t think it fits with our common ground.”

At the conclusion of the meeting, Robert Brennan, chair of the Investment Committee, refused to comment on board business or the student protesters.