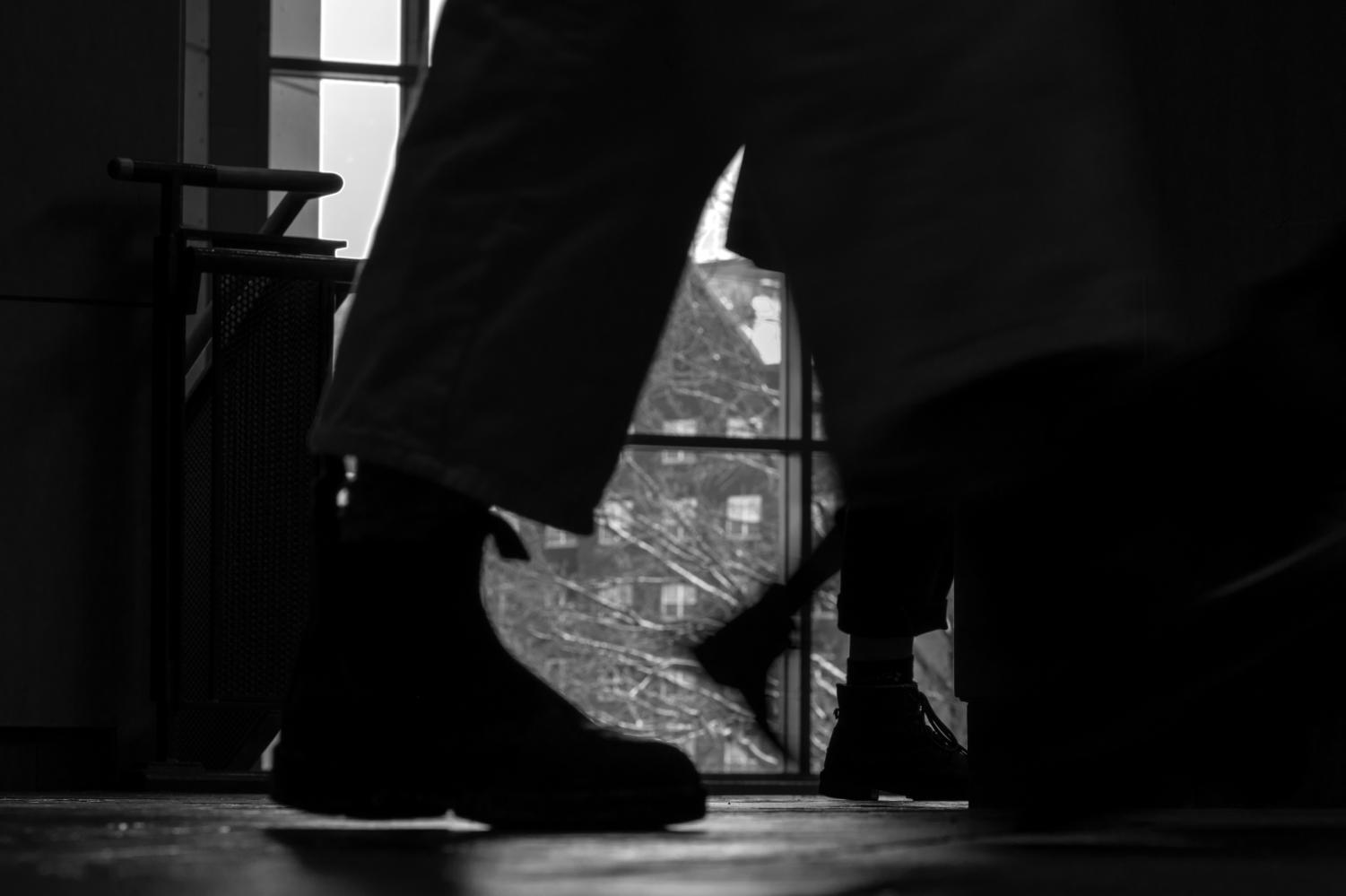 ‘It begins with the top:’ Despite calls to action, faculty of color at UVM remains far below national average

Nearly six months after a group of faculty and staff members of color wrote to UVM administrators asking to diversify personnel and improve the school’s climate, the UVM Faculty Senate has approved a new plan of action.

During the Feb. 1 2021 UVM Faculty Senate meeting, a resolution advocating for the hiring and retention of faculty of color, written by a group of BIPOC faculty, was approved with overwhelming support.

This resolution was the culmination of many ideas and concerns by faculty of color, who have been working to improve diversity initiatives at UVM.

According to Jinny Huh, an English professor who helped work on the resolution, the group was seeking support from the Faculty Senate for faculty of color recruitment and initiatives that have been at the forefront of discussion for months.

Huh also works as the director of Equity and Strategic Initiatives in the College of Arts and Sciences and as director of the Critical Race and Ethnic Studies program at UVM.

In August 2020, a letter was addressed to UVM administrators including UVM President Suresh Garimella and Provost Patricia Prelock and signed by a group of forty-two faculty members of color.

The letter called out UVM’s failure in recruitment and retention efforts and offered ideas for potential improvements.

“The largest higher-ed institution in the predominantly white state of Vermont should commit to recruit AND retain faculty of color in order to attract a more diverse student body and offer a richer educational and intellectual experience for all,” the letter signers wrote. 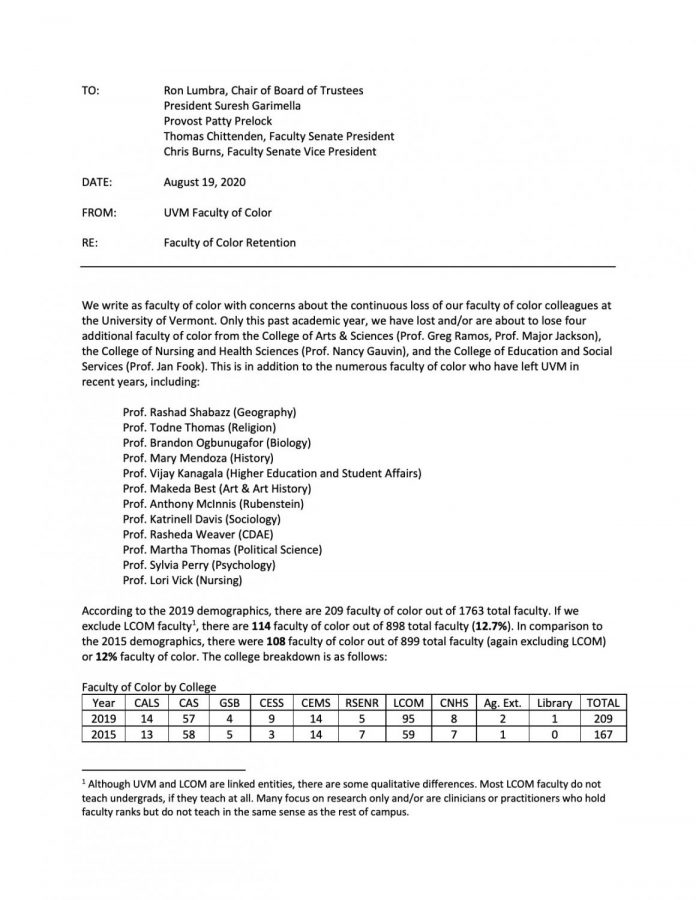 According to the U.S. Department of Education, 25% of faculty at universities and colleges in America are non-white, meaning that UVM would need to double the number of faculty of color it employs just to reach the national average.

The UVM fall 2020 diversity data report showed a slight increase over the last five years in faculty of color, which now makes up 13.1% of the population of faculty and staff. However, this number still falls far below the average.

UVM spokesperson Enrique Corredera said assertions that UVM is struggling to hire and retain faculty of color are not supported by the University’s data.

He stated that the number of BIPOC faculty at UVM has increased by nearly 15% in the past five years and that the University has had a net gain of 27 faculty of color in the same duration.

However, Corredera’s statement lacks context. Out of all faculty at UVM, the percentage of BIPOC faculty only rose 0.9% as a percentage of all UVM faculty from 10.8% in 2016 to its current rate of 11.7%.

While these numbers reflect the change in percent faculty of color relative to faculty as a whole at UVM, Corredera’s assertion does not account for the fact that overall faculty at UVM increased by nearly 6% over the five year span.

While Corredera did acknowledge that other institutions succeed in recruiting some faculty away from UVM, he said UVM’s recruitment efforts “allow us to make up for that and stay ahead.”

Despite Corredera’s assertion, UVM’s own institutional data shows slow growth and the beginning of a downward trend with faculty of color dropping from 11.9% to 11.7% from 2019 to 2020, witnessed in high-profile people of color leaving the University in recent months.

The vote by the Faculty Senate came in the wake of former English professor Major Jackson’s departure, an accomplished Black poet who taught at the University for 18 years.

It also came in the weeks following the announcement that Wanda Heading-Grant, one of few BIPOC in UVM’s upper administration would leave UVM in March. Heading-Grant is also the VP for diversity, equity and inclusion.

At some point, your ability to listen to promises just expires.  After a while, it’s just, where is it, where’s the change?”

Paul Yoon, a senior advisor for strategic diversity assessment and research, worked with administrators to address issues brought up in this letter.

“I think institutionally, the responsibility for all faculty-related issues lies with the office of the provost, with our academic unit, the colleges and then the school,” Yoon said.

According to Chris Burns, VP of the UVM Faculty Senate, although other departments have been working to address diversity and retention rates at the school, at the end of the day the Provost’s office, deans, and department chairs have the power.

However, even with Faculty Senate support, faculty of color have struggled to see UVM officials follow-through regarding their concerns.

“At some point, your ability to listen to promises just expires,” said Professor Emily Bernard, one of the authors of the August letter. “After a while, it’s just, where is it, where’s the change?”

Although the University claims they lack the financial capability to hire more faculty of color, Bernard believes they simply lack the priority to do so.

After two decades at UVM, Bernard found it painful to think that little has changed. She said the lack of representation has affected her personally and the way she thinks about her future at the school.

Associate Professor Pablo Bose, a co-writer of the August letter, said that despite genuine efforts from the University, some strategies have not worked.

“We’ve seen lots of efforts to try to do it,” Bose said. “My concern is that some of those efforts haven’t produced a tangible positive net result over this time.”

Bernard also said that there are sincere efforts and discourse surrounding faculty retention at UVM, but that she believes the results do not match the promises the school has been making.

“I would almost prefer to have upper administration just tell us, look, this is really just not a priority to us right now. It’s frustrating,” Bernard said. “We get all the language we need, but we’re still suffering from a lack of numbers and retention.”

It has to be an embedded part of who we are as an institution. And that means chairs and deans and faculty all making a commitment towards that. And it begins with the top.”

In a November Cynic interview with Professor Major Jackson, he said he believes that diversity, equity and inclusion need to be integrated more into UVM’s identity.

“It has to be an embedded part of who we are as an institution. And that means chairs and deans and faculty all making a commitment towards that,” said Jackson. “And it begins with the top.”

Bose also said the August letter was not the first call to action UVM’s faculty of color have submitted with regards to discrimination and diversity.

“A few years ago I wrote a letter with some other colleagues about some of the different ways in which things like course evaluations and a whole range of other things were affecting faculty of color,” Bose said.

According to Bernard, there have been some genuine efforts from leadership in response to these letters, including the Andrew Harris Fellowship, an award established to recruit faculty of color, and talk of a cluster hire to bring in people of color.

However, these efforts don’t negate the lack of diversity in UVM’s faculty.

“The more people leave, the harder it is for those of us who have been left behind,” Bernard said. “There are a lot of people who I think are rightly just infuriated at this point and exasperated.”

Bose said the UVM Provost has set a goal of 25% representation of faculty of color, and that several proposals exist including creating a social justice institute and providing resources for faculty of color to host workshops.

Bose said challenges often occur for faculty of color in the classroom through problematic interactions with students.

“The challenge for me that I’ve seen has not been about administration,” Bose said. “It has been about the classroom environment and the different ways in which certain students treat, especially female, faculty of color.”

Bose said that one of the chief hurdles for retaining faculty of color is ensuring that their experiences in the classroom are positive.

Bose believes one of the greatest points of tension between students and faculty of color comes with student evaluations.

“The scores on D1 courses are often much lower especially for female faculty of color,” Bose said. “which has less to do with what they’re doing in the classroom and a lot to do with how they’re interpreted by students.”

Jackson also noted racial issues in UVM’s culture that impacted him during his time at the school.

“I’ve had students write horrible things on evaluations that they would never write to any of my colleagues,” Jackson said. “I’ve had colleagues perform microaggressions.”

Now, Bose and his fellow faculty members are hoping their proposal, approved by the Faculty Senate, can help to not only improve the climate of the classroom but also diversify UVM’s campus.

“Outside of the College of Medicine, our numbers are flat at best, in terms of the number of faculty of color that we have,” Burns said. “If our goal is to increase that number, the University hasn’t done what’s needed.”

Bose said his interest is in widening the pool of applicants being recruited, and that there are many other recruitment mechanisms in the works.

“There’s a new proposed recruitment tool to bring in people through the Honors College, and connect them with an expanded Henderson and Harris program,” Bose said. “Other people who have been involved with these efforts have talked about things like bigger startup packages to entice people, spousal hires to keep people here, and I think all those things are part of the story.”

Yoon believes there needs to be a greater effort throughout the University to create trusting relationships between faculty and staff of color and administrators during the hiring process.

As a staff member of color, Yoon has seen a lack of commitment from deans and administrators across the board to create a culture of inclusion for new BIPOC hires, in big as well as small ways.

“In my case, as a POC staff member, when I moved to Vermont I didn’t know where the Asian grocery stores were, I wasn’t sure what kinds of networks that were available to POC individuals,” Yoon said.

Although seemingly small issues, Yoon pointed out that these little things are really what matter to people and make a place feel like home.

“What we should do sounds so simple, and some academic units, departments specifically, will have some relationships where the chair, or maybe an older faculty member will support that new faculty member, but it’s not institutionalized,” Yoon said.

Through his research, Yoon hopes that once the committee he chairs comes up with a plan for retaining faculty and staff of color, the colleges will execute their efforts in this area to similar degrees.

“Things should be similarly executed, or there should be a similar level of intention across the University and it shouldn’t be dependent on an individual desire to do this by specific deans, but all of our teams should be held accountable by the Provost in this case,” Yoon said.

Ideally, the recently approved proposal made by Yoon’s colleagues should address some of these institutional issues by forcing deans to engage in the diversification of each college, but the warmer culture of mentorship Yoon desires may be harder to create.

However, Bernard believes the University should be putting less focus on why faculty members of color leave and instead ask those who have stayed for many years why they choose to stay.