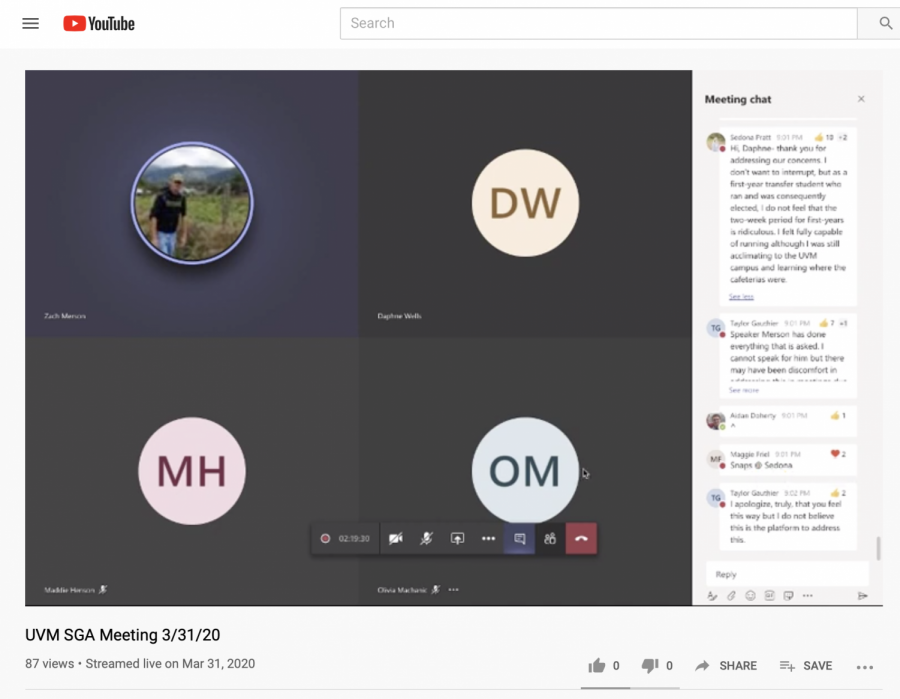 In this screenshot from the live streaming of the meeting on Youtube, SGA senators comments can be seen on the right.

SGA and Department of Student Life at odds over new committee

After attempting to make changes within SGA to better respond to internal issues, the student organization ran into resistance from UVM administrators.

At SGA’s first virtual meeting, March 31, held on Microsoft Teams, senators planned to make changes to the SGA Constitution by creating a protocol for certain situations such as sexual harassment allegations or senators not doing their job.

However, following confusion over whether or not they could make these changes and a heated exchange between Daphne Wells, director of student life and SGA adviser, and members of SGA, a resolution wasn’t reached.

At the meeting, SGA senators planned to discuss and move forward with the creation of a new Judicial Committee aimed at internally policing the organization, stated Speaker of the Senate Zach Merson, a senior, in an April 2 text message.

“The main purpose of the Judicial Committee is to enforce the constitution and other SGA documents. Say that someone is not showing up or not doing their job, right now there is no clear way to handle that,” Merson stated.

Additionally, the Judicial Committee would refer any situations of sexual harassment or more serious issues to Title IX, the office in charge of these complaints.

Merson, is also the chair of the Constitution Committee, which is formed when the constitution needs to be revised, Junior Jake Gess, an SGA senator stated in an April 2 text message.

“We’ve created a structure for how to handle these issues,” Merson’s text stated. “Our priority is, of course, to correct the issue by working with the member of SGA in question, but we do also have the power to remove members if the problem persists.”

Gess said their adviser was the primary roadblock when it came to creating the committee. They were told they were making rules that went against UVM policy, he said.

Wells was asked to speak during the meeting to explain the policies SGA was breaking by trying to govern themselves.

“There are no policies or procedures being broken,” Wells said. “It is my role as the adviser to ensure that the manner in which SGA’s operation is not in conflict with any of the University policies or procedures and there are a number of things in the constitution as it is written that is currently in conflict and it also raises a lot of eyebrows in terms of operations and what a constitution is.”

Wells also said she felt that she had not been included in the conversation about changes, despite being SGA’s adviser.

“As an adviser, I think that it is still out of respect that when you are adding new things, or you are bringing up new processes that will go into how the SGA is run, that it’s only out of respect that those things are mentioned to me, [so] I’m not blindsided or I’m just learning about something for the first time when it is in a document like the constitution,” she said.

SGA members in the Microsoft Teams chat expressed their disagreement with Wells’ statements, including junior Olivia Lopez, a senator on the Committee on the Environment.

“Daphne, I don’t mean to interrupt, it is hard to just now hear your opinion when many of us not in the executive [team] have not heard your opinions/stance on many things all semester,” Lopez stated.

SGA treasurer Taylor Gauthier, a junior, left a comment in the chat showing support for Merson.

“Speaker Merson has done everything that is asked,” Gauthier stated. “I cannot speak for him, but there may have been discomfort in addressing this in a meeting due to previous discourse.”

This is not the first time tension has grown between Wells and SGA senators.

Confusion among senators and resignations occurred earlier this year over disagreements in how SGA leadership and Wells handled previous situations.

Merson put himself on the speaking order during the meeting to address the issue from his side.

“The more important thing is how much authority is the SGA being given, it’s right to represent students and it’s right to determine its own course,” Merson said. “I felt that having anyone from administration say that there are changes that SGA must make based on their opinions and how they see SGA running is very harmful to our mission of expressing student voice effectively.”

In order to add another committee, the SGA Constitution would have to be changed to give some authority to the Judicial Committee.

Some changes were simply moved from one part of the constitution to another. Other changes were made to adjust for organizations that are no longer active on campus or creating more general language.

The meeting lasted four hours and 15 minutes before a motion was made to vote on everything in the SGA constitution but is two parts, the judiciary committee and speaker of the senate section and operational documents.

The motion was approved and the committee voted to pass the changes made. SGA will meet next Tuesday, April 7 to vote on the judiciary committee and speaker of the senate.