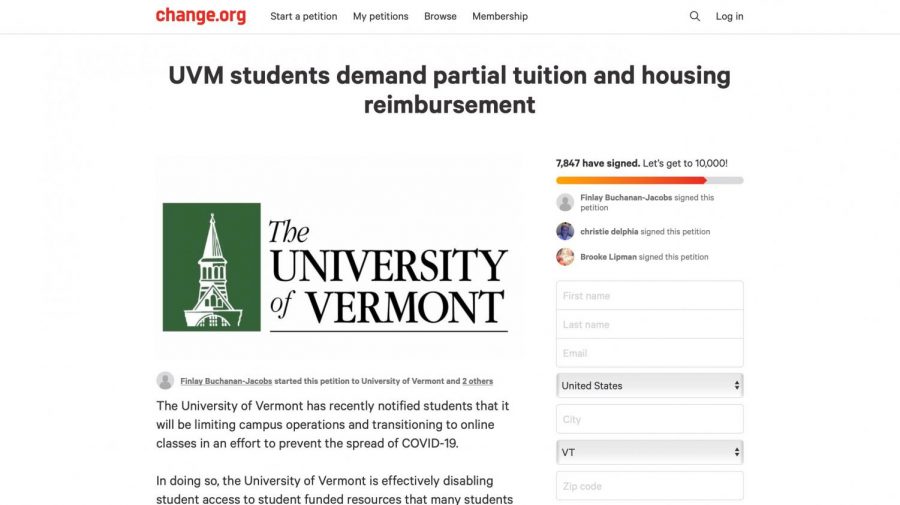 Screen shot of the petition

Sophomore Finlay Buchanan-Jacobs created a petition demanding partial student reimbursement for housing and tuition. As of April 21, the petition has more than 7,800 signatures.

When UVM first transitioned to online classes in mid-March due to COVID-19, administrators were met with backlash from students for not providing housing and tuition reimbursement.

This was due to a policy stated in the student housing contract.

Demands for reimbursement continue to rise, persisting even after President Suresh Garimella’s March 23 email announcing $1,000 worth of housing credit to students.

With a petition, a lawsuit threat and support from local government, one student, in particular, is at the front lines of these demands.

Three weeks ago, sophomore Finlay Buchanan-Jacobs created a petition demanding partial student reimbursement for housing and tuition. As of April 16, the petition had more than 7,800 signatures.

“If UVM fails to provide students with necessary resources for which they have already paid, students MUST be entitled to a partial tuition and housing reimbursement,” the petition states.

Buchanan-Jacobs said he created the petition because he thought the University, particularly the University’s Residential Life services, was not doing enough for students.

“It seems like there’s a double standard in ResLife policies,” Buchanan-Jacobs said. “These policies only exist not when student safety matters, but when there’s a financial benefit for the University.”

Buchanan-Jacobs has had negative experiences with UVM ResLife in the past, causing him to distrust the organization, he said.

“ResLife has completely incompetent administration,” he said. “Very few, if any of them, know their own policies.”

Before Garimella’s March 23 announcement regarding the reimbursement of $1,000 worth of student housing credit, UVM’s COVID-19 FAQ page stated that there would be no reimbursements for housing or meal plans in accordance with the 2019-2020 housing and meal plan terms and conditions.

“In the event that the University of Vermont closes due to a calamity or catastrophe beyond its control… such as a natural disaster, a national security threat or widespread pandemic flu, room and meal plan fees will not be refunded,” the terms and conditions states.

However, the University reserves the right to modify the existing policy, according to the Refund and Bill Adjustment Policy.

“The modified refund policy would be determined by the University administration and approved by the board of trustees,” the policy states.

“Although the Housing Terms and Conditions are clear, the University and Residential Life recognized the burden placed on students by this tragic turn of events,” he stated in an April 16 email. “The University decided to issue credits that we believe are fair to students and families.”

The housing credit was not meant to be an exact reimbursement of what students and their families paid, but the University took into consideration the number of students, room rates and the time frame of the pandemic to evaluate the credit, Corredera said.

“It is not everyone’s desired outcome, but neither is this moment in time,” he stated. “We are doing the very best we can under challenging circumstances.”

“I think it’s a grossly inadequate compensation for students,” he said. “And there seems to be no intention to provide any tuition refunds. While I admire the efforts of the University to adapt to online coursework, it’s not enough.”

Other students also support reimbursement. Sophomore Shannon Thornton believes that the University should be giving more to students.

“One thousand dollars$1,000 isn’t even near the full cost of room and board for a semester, and they aren’t even reimbursing tuition,” Thornton said. “This is despicable. The administration needs to live up to the credibility of the University of Vermont name and do the right thing for once.”

To sophomore Emily Wasem, it seems that the University doesn’t care about her needs.

“I think that it’s unfair to withhold any money that I would’ve spent on half a semester, which is much more than a thousand dollars,” she said. “I think we need a direct refund, not just housing credit.”

“I’m really pleased that they reimbursed students,” Ashe said. “I think they’d been more proactive than many other institutions. I’m glad that students will be getting some of that money back, knowing that they also are going through a difficult time.”

However, Ashe is not sure if the University should further reimburse students.

“I don’t have enough information to know what UVM should do next,” he said. “But I know that the financial picture for UVM, just like lots of higher ed institutions, is really bleak right now.”

After the March 23 announcement, Buchanan-Jacobs was contacted by lawyers from Ice Legal Law Firm to offer help in filing a lawsuit against the University.

Though he is ready to take legal action when necessary, Buchanan-Jacobs does not want to if he doesn’t have to, he said.

“I’m planning on graduating from UVM in the future, so it’s not good for anyone to tarnish the reputation of the University,” he said. “I don’t think legal action is a necessary step, but if they make it necessary, I’m certainly prepared.”

Ice Legal Law Firm did not respond to requests for an interview.

With the potential lawsuit at the ready, Buchanan-Jacobs is hopeful that a negotiation with the administration can be reached.

“My intention is to maintain the lawsuit as a last resort,” he said. “But there seems to be some more traction towards further reimbursement in recent days.”