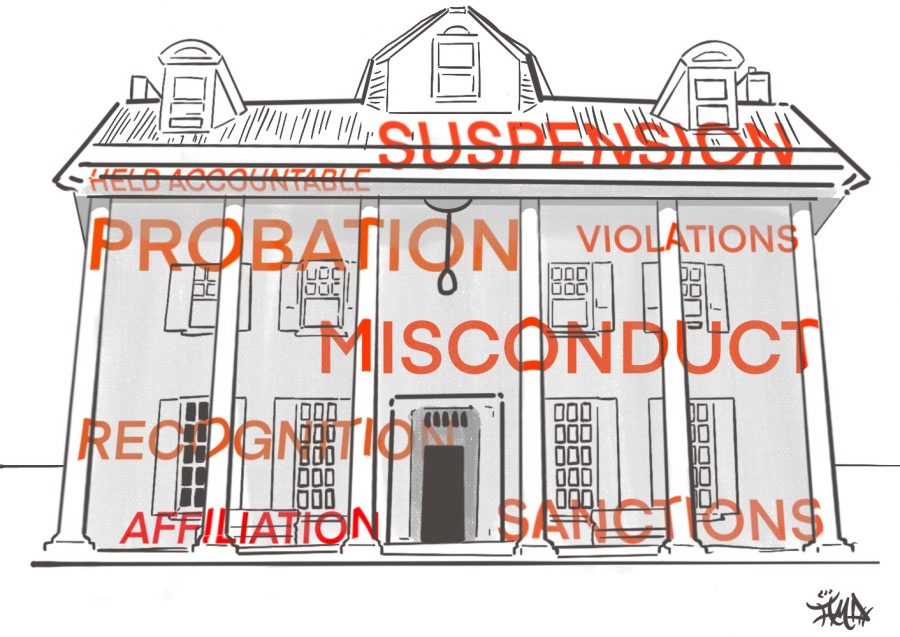 Students frustrated over lack of transparency from FSL on fraternity misconduct

The current procedures intended to address fraternity and sorority misconduct at UVM evoke confusion and frustration from several members of the student body.

As recruitment season commences for fall 2021, student organizations that look and act like fraternities but are not recognized by the University continue to operate. The system in place to address fraternity misconduct is still fairly new and remains a work in progress, Dean of Students David Nestor said.

Some students said they have issues with the current system lacking student involvement, transparency and clarity surrounding the language that defines various sanctions.

At 10:05 a.m. an email from Lina Balcom, Interim Director of Student Life, was sent out to UVM students titled Unrecognized Student Groups at UVM stated AGR was on probation, referring back to the misconduct web page.

Senior Connor Kepcher, president of AGR, said despite the webpage listing, its probation actually ended in 2019.

With limited details, the three frats appear to have made similar violations, as they all are listed with hazing and alcohol violations, except for AGR, which did not commit hazing violations, according to the webpage.

De-recognition and suspension are both defined on the FSL website as “separation of a Student Organization from the University.”

Probation is defined as “a formal written notice that the Organization is not in good standing with the University and its actions will be monitored for a period no less than one semester.”

A lack of transparency and confusing terminology

Nestor said the entire FSL sanctioning system can be ambiguous because it’s fairly new and is still being refined.

”This is a work in progress,” he said. “We’ve had this student organization misconduct policy for procedures in place for maybe several years, but we used to really not have anything in place.”

One change some students said they would like to see in the handling of FSL misconduct is more student involvement in those procedures.

“[FSL is] very uninterested in having any students involved with that process,” SGA President Sam Pasqualoni said. “It’s very much an administrative level task, which makes myself and a lot of my colleagues, and I’m sure a lot of students, [feel] entirely left out of this process.”

Kepcher said one issue he has with the handling of FSL misconduct is the challenge of deciphering vague language used for fraternity sanctioning.

When AGR found out they were put on social probation in 2017, the frat’s executives went to FSL to ask what it meant to be on “social probation.” Kepcher said they were not given a definition.

Kepcher said he thinks the terminology and standards should be more clear.

““[The website] says ‘alcohol violations,’ but what does that mean?” he said. “I believe there should be reports on what happened. It could be anywhere from they had 20 kegs in the house to a member getting caught on campus with a beer.”

Kepcher said he believes the full story of fraternity violations should be made public.

“Look, we want things explained, we want members that participate in these actions removed,” Kepcher said.

Nestor said because fraternities are organizations, not individuals, there’s nothing stopping the University from being more transparent about this information in relation to FERPA or privacy rights.

The Cynic was unable to obtain the full stories of the incidents behind the sanctioning of the currently sanctioned fraternities.

In January 2017, AGR was found responsible for providing a venue and alcohol that enabled underage drinking in an October 2016 event, according to an Aug. 31 email from UVM Spokesperson Enrique Corredera.

However, Kepcher said AGR’s probation had already ended by the time he joined in 2019. The group was not listed in the University’s Sept. 8, 2020 email to the student body identifying unrecognized and suspended student groups at UVM.

Kepcher said he’s known the FSL Chapter Misconduct web page listing has been out of date for a while and believes FSL might be too lazy to fix it.

Nestor said he thinks any fraternity president would know the status of their own fraternity and he too believes the FSL Chapter Misconduct webpage is outdated.

“It’s a good question for Christina [Vega],” Nestor said. “I don’t recall that there was an incident with AGR that resulted in a sanction.”

Despite the believes of both the Dean of Students and the President of AGR, UVM spokesperson Enrique Corredera stated in a Sept. 9 email to the Cynic that the Chapter Misconduct website is correct in labeling AGR as a chapter on probation.

FSL Assistant Director Cristina Vega did not respond to the Cynic’s multiple requests for comment and redirected the Cynic to Corredera.

AEPi was de-recognized in 2014 and given a five year suspension for hazing and alcohol violations, according to the FSL chapter misconduct website. Their suspension was extended by three years for violating their sanctions.

On Sept. 1 @aepi_vermont posted about the upcoming rush events they are hosting for their frat, captioning the post “Fall Rush 2021.”

The first post on @aepi_vermont was made November 2020, despite the initial recognition removal occurring in 2014.

“It’s a little bit of a stalemate, but what we’ve decided to do, is for every year they continue to operate without recognition, their suspension is just extended that much longer,” Nestor said.

AEPi’s suspension extension occurred following the death of a student associated with an event at AEPi’s former house on Buell street in February 2019.

Jonathan Pierce, AEPi’s national chapter spokesperson, stated in an Aug. 29 email that he was not aware of specifics on AEPi’s hazing and alcohol violations, but that the national chapter felt the University responded too harshly in de-recognizing AEPi.

Still, Pierce said AEPi has no current plans to regain recognition from the University.

“At this time, we do not believe that the University administration will be a good partner for our organization,” Pierce stated in an Aug. 29 email. “HOWEVER, this is in no way an attempt to skirt any kind of supervisory or regulatory behavior.”

“Once they fulfilled those, they continued to operate independently. We did not want to leave campus, we have a long and proud history at the University of Vermont,” Pierce said.

Nestor said there was an investigation following the death of Connor Gage but he is not aware of any particular fraternities that were held accountable for the incident.

Although fraternities are generally not allowed to participate in social events such as rush while lacking University recognition, Noah Freedman, junior and AEPi rush chair said they are holding rush regardless without affiliating their rush with the University.

“I don’t know where you’re getting information but we have not had one rush event at University of Vermont,” Freedman said. “Just because we’re not affiliated with the University doesn’t mean we can’t have rush.”

Freedman said his fraternity recognizes that they do not have SGA recognition and they are not advertising through UVM; however, AEPi is composed of UVM students and they are accepting pledges this semester.

“There’s been a lot of stuff going on in last year, and we totally recognize that and we are here to support everybody at the University, but unfortunately, our brothers in the past made some mistakes that made us not affiliated, but I don’t know those brothers,” he said. “This isn’t something that needs to be a big deal.”

Pi Kapp is under interim suspension due to a pending outcome of a group misconduct investigation, according to the website.

Nestor said he is not aware of any details related to the Pi Kapp case. Senior Franklin Cody, the contact listed for Pi Kapp on the FSL website, did not respond to the Cynic’s multiple requests for comment.

Another group lacking UVM recognition, known as SHORE, was never an official fraternity to begin with, but it always operated similarly to how a fraternity would, Nestor said.

“There was a belief that [SHORE] was a group of guys from a fraternity that had been suspended, whether it was or not I don’t know,” Nestor said.” And that they continued to kind of operate as if they were a fraternity.”

SHORE briefly had SGA recognition and funding before SGA completely understood who they were or what they did, Nestor said.

“Then, as soon as SGA started asking some further questions about them, they chose to not not be recognized, or not go through the recognition process,” he said. “This is a group that has no recognition, whatsoever. I haven’t heard anything about them for the last year and a half or two.

The Cynic was unable to find a way to reach SHORE to request comment.

Nestor said at the end of the day, UVM can’t control who students gather with or what they affiliate with off campus.

“We just want to alert people that these groups kind of operate with no kinds of guidelines whatsoever,” he said. “If a student chooses to become involved in that, it’s just a riskier proposition.”