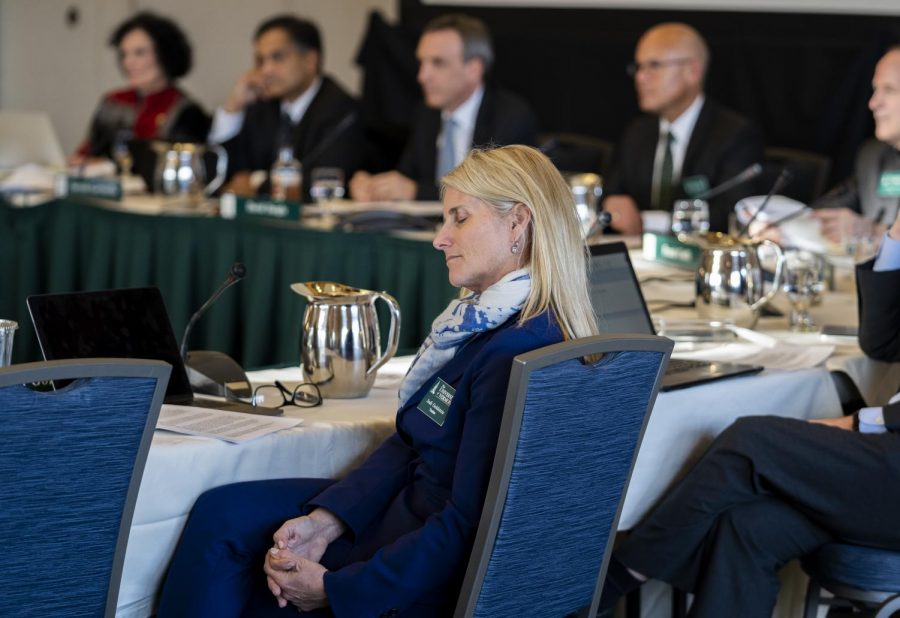 Tensions grow on board of trustees over gender equity and diversity

Despite a push from the Vermont Legislature to make half of the UVM board of trustees members female or nonbinary, the board has signaled its resistance.

The potential new law, which is currently being weighed in both the Vermont Statehouse and Senate, have left some on the board to call the mandate a “legislative overreach.”

Currently, of the 25 board members, six are female and 19 are male. UVM’s student population is 59.9% female, according to UVM’s 2019 enrollment report. Additionally, 55.9% of faculty and staff are female identifying.

Some faculty, students and staff have also signed a petition that calls on the board to diversify, adding internal University pressure.

The proposed state law would require that 12 or 13 members of the board be women or nonbinary by 2025.

The board announced they had passed changes to “reinforce the importance of seeking diversity,” when looking for new members, according to a Jan. 31 press release.

In the course of conversation about the legislation during the Vermont Agricultural College Board’s meeting Jan. 31, trustees said they can’t meet the potential 2025 deadline.

“Instant fixes are not possible, so the 2025 deadline is so arbitrary,” trustee John Bartholomew said. “It’s utterly impossible.”

However, Sen. Chris Pearson, the primary sponsor of the Senate bill, said that 2025 is not an arbitrary date.

He and those he worked with to craft the legislation strategically picked that date because most of the trustees’ terms will be over by then, Pearson said.

“Any time you’re proposing something that is controversial, you try to basically remove as many hurdles as you can,” he said. “[It’s] an attempt to work with the board to phase out the imbalance.”

Rep. Johanna Donovan, who is also a trustee and was at the meeting Jan. 31, said that she feels this legislation isn’t needed and that the legislature doesn’t have the power to make this change.

“It is certainly my feeling that it is a legislative overreach,” Donovan said.

Specifically, the group of legislative-appointee trustees, those who are selected by the Vermont Legislature, have been discussing ways to increase diversity and encourage more diverse candidates to come forth, Donovan said.

Donovan said she couldn’t speak for other members on the board, but she hopes that the Legislature will leave it up to the University to make these decisions.

“We’re not suddenly talking about the board for the first time in law,” he said. “We’re not commandeering that. I’m sure the board doesn’t like that. Clearly this is not something we have done much with.”

Two other representatives who are also trustees, Reps. Curt McCormack and Kevin Christie, both signed on as co-sponsors to the House version of the bill.

Pearson said although some changes have been made to the language of board policies as of Jan. 31 to reflect the need for greater diversity, they aren’t enough.

“I think it’s good they are acknowledging the dynamic, but I know those are sort of aspirational directives,” he said. “They’re not forcing their hand, our proposal is, ‘no, you will do this.’ This is not something we hope you get to.”

At the Jan. 31 board meeting, Donovan said she hopes the issue gets pushed further, to which UVM President Suresh Garimella replied with what Donovan described as a joke.

“You could fire me and hire a woman,” Garimella said.

Donovan said that her take on that comment was that Garimella was attempting to bring a moment of lightness to a difficult conversation.

“I’m surprised that there is anything being read into that, because in this context, the president himself is a picture of diversity,” she said.

In a Feb. 1 email to the Cynic, UVM Spokesperson Enrique Corredera stated that he had looked into the matter and it was “a light-hearted comment.”

In a Feb. 1 statement to the Cynic, Garimella stated he is supportive of current board efforts to diversify.

“I believe deeply in diversity in all forms in our faculty, staff and student bodies,” Garimella stated. “I also recognize the value of diversity on the board, although the University president has no role in the selection of any trustees, and rightly so.”

In the Senate, the bill is currently in the Education Committee which is chaired by Sen. Philip Baruth, who is also an English professor at UVM.

Baruth said that the committee is taking testimony on the bill and is the process of reaching out to UVM and the board, but from his perspective, something is clearly not right with the make-up of the board.

Board members need to assist UVM in bringing in donors and support, but there’s no reason women can’t do that too, he said.

“One of the things they try to do is select trustees that can try to help them with their capital campaigns,” he said. “But, I would think in this day and age, there are plenty of qualified female candidates that have access to donors and help not just bring in money, but steer the board.”

For now, Baruth sees the role of the Legislature as overlooker of the board, and his committee will work to find a solution, he said.

The end of the Jan.31 meeting marked the last meeting for student trustee Sydney Hilker, dropping the number of women from six to five on the board.

Her replacement is a man, said SGA president Jillian Scannell, a senior.