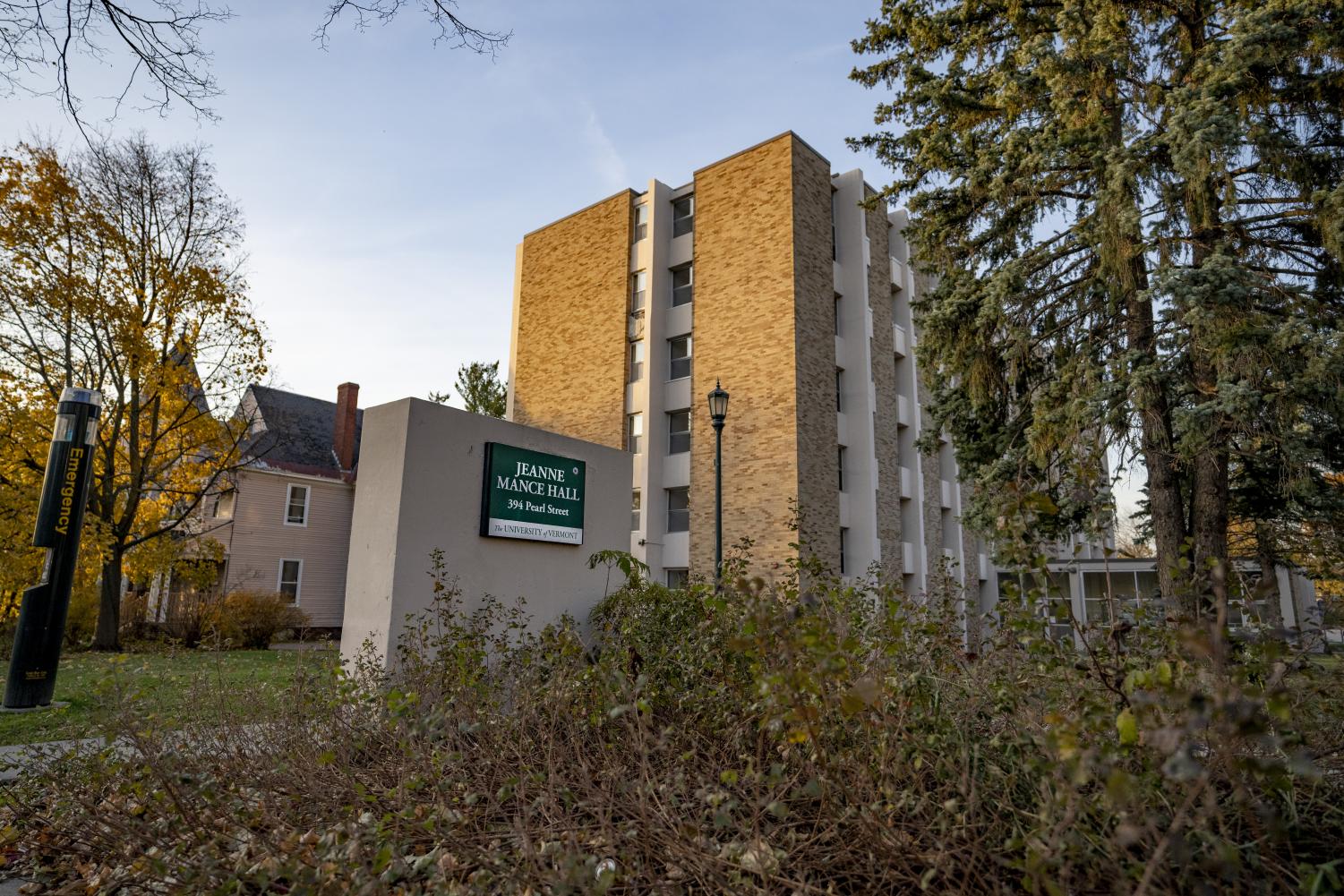 Jeanne Mance became UVM’s designated quarantine and isolation building for students at the beginning of the semester. Located on Pearl Street, the residence hall is surrounded by other UVM buildings and Burlington homes. (Sawyer Loftus)

Jeanne Mance became UVM’s designated quarantine and isolation building for students at the beginning of the semester. Located on Pearl Street, the residence hall is surrounded by other UVM buildings and Burlington homes.

‘There is no real surveillance of this place’: A look inside UVM quarantine as COVID cases rise

Driving down Colchester Avenue, as it turns into Pearl Street, it’s not hard to skip over UVM’s last residence hall—Jeanne Mance—before the landscape changes to the commercial center of downtown Burlington.

Walking by, it looks like any other UVM dorm, students in the back soaking in the sun and familiar UVM signage telling students to wear masks and steps to prevent the spread of COVID-19.

Inside Jeanne Mance, somewhere between 37 and 57 students were living in quarantine and isolation dorms, some for just a few days, while others longer.

All were housed there waiting to hear whether or not they were infected with COVID-19, after an uptick in positive cases following Halloween Weekend.

In the consequential days following Halloween weekend, students living in quarantine spoke of little to no supervision in quarantine dorms, the near-capacity limit in Jeanne Mance and the party on the fourth floor of Wilks that brought many of them there.

Since the start of the semester, the hall has been used as the quarantine and isolation dorms. Though students have filtered in and out of the building since school started, never has there been so many students in UVM quarantine as there are now.

Editor’s note: Several students throughout this story appear with first name pseudonyms as many feared they would face adverse action from the University.

First-year Joe Porriello, who lives in Wing Hall, said he was walking back from the track Tuesday afternoon when he saw students with packed bags.

“I walked in the door and I see more people, dragging bags out and someone is sitting on the chair in the lobby who has a bag and so I’m like ‘are people go home this early?’” Porriello said.

“But then, this girl was dragging a bag out of Wilks and her friend was like, ‘Watch out everybody, the trail of corona is coming through.”

Porriello said he then went upstairs to his room and looked out the window to see a yellow van.

“I was looking out my window, and people were loading stuff into a van,” he said. “And then they started to walk as a group and I counted about 17 people.”

Annie Stevens, vice provost of student affairs, said of the initial quarantine of 30 students, the “majority” were from one residence hall.

Porriello said he wouldn’t be surprised if that was Wilks Hall.

Two anonymous students who are now in quarantine, John and Michael, confirmed Poriello’s suspicion. Many individuals among the group of 30 who were deemed close contacts of the first positive case this week were at a dorm party on Wilks 4, according to the students.

John and Michael were fined, they said, but disciplinary action was handled separately from the health side of things. Contact tracing was a separate process.

“We were busted, but there were other parties going on right around us,” John said.

John and Michael said they think there was no way of preventing this uptick in cases.

“People were gonna go out and have a good time no matter what,” Michael said. “I don’t think there’s anything that could have stopped halloweekend from causing a giant amount of cases.”

James, an anonymous student not in quarantine, said he was invited to a frat party over the weekend and chose not to attend. He mentioned at least 2 fraternities and at least 2 club sports houses that allegedly threw parties during Halloween weekend.

“It’s just so dumb, it’s so dumb,” James said. “It takes one person to be infected to go to one party and then the entire school gets shut down like it’s just that simple. I am very concerned but I’m just trying to be as positive as possible and hoping for the best.”

On Tuesday, John and Michael said things moved quickly and so many students were being moved to quarantine housing that there wasn’t enough room in the Student Health Services Van.

“We packed up quickly and then we threw what we could into a bus,” John said. “And then we walked over to Jeanne Mance and we had to wait out for a good amount of time.”

When John and Michael arrived at Jeanne Mance to begin their quarantine after walking with a group of students deemed close contacts across campus from Wilks, they were met with a building that seemed to them to be overflowing.

“There were so many people coming in on the day that we were moving in, we got assigned our room on the third floor — and it’s crazy like as soon as one room opens up there’s another one being filled up in an hour,” John said.

“People were gonna go out and have a good time no matter what. I don’t think there’s anything that could have stopped Halloweekend from causing a giant amount of cases.”

John and Michael say they were informed by University officials that there might have to be an overflow building opened up. However, Corederra said that UVM is not experiencing any such issues.

Another student in quarantine, first-year Alana Berman, said that the nurse and hall monitor, Dana, told her that if Jeanne Mance reaches capacity the University will have to close.

There are 70 rooms in the building, according to another student living in quarantine.

Most rooms house only one students, with the exception of students that went into quarantine with their roommates.

The state-mandated that all colleges allocate enough rooms to hold at least 5% of their on-campus populations for students who need to be put in quarantine and self-isolation.

Students in quarantine also expressed concern that some other quarantine students in Jeanne Mance have not been socializing and hanging out with each other.

“We had a floor meeting today because people have been going into each other’s rooms and stuff. People are not holding up their end of the bargain about being here so they’re kind of tightening up restrictions,” Michael said. “People aren’t following the rules.”

Other quarantined students also expressed that rules have not been closely followed inside Jeanne Mance.

“Last night, we could hear [students] running up and down the hallways, whoever’s above me moving around their furniture or something, music playing, I don’t really know,” said another anonymous quarantined student, Sarah. “I’m glad that they’re tightening rules to make sure that it doesn’t spread more. So it’s disappointing, but I understand why.”

First-year Flynn Opatz is a friend of the students from Wilks Hall who were associated with a positive test and had to quarantine. He said he has heard similar things about the lack of supervision and lack of rule enforcement in Jeanne Mance.

“Apparently people are hanging out in there,” he said. “So I think there’s a lot of a lot of criticisms to be made about Jeanne Mance.”

Additionally, at least one student told the Cynic that students quarantining freely walked away from the building and around the block.

“I’ve gone on a couple of walks around the block,” said Sarah, another student in quarantine. “I’ve also just kind of sat out in the grass and spent time outside, and we can also get food delivered to the outside of the building.”

John and Michael said that there isn’t much-preventing someone from leaving the building entirely if they wanted.

“That’s what makes it difficult is there is no real surveillance of this place,” Michael said. “It’s just this nurse and her husband that lives in the lobby of this building, so it’s really easy for people to take advantage of that.”

“I mean if someone wanted to, you could just leave,” John said. “If you had no concept of how detrimental that could be to the people around you, you could totally just go.”

As of Nov. 9, the University has reached 8 new positive cases of COVID-19, according to Corederra.

In a statement to the Cynic, Corederra reiterated that all protocols and procedures are being followed by UVM. Several students from Wilks, who were only in quarantine for five days returned to their dorms Nov. 9.

According to UVM, it had been seven days since many had been in contact with a positive case.