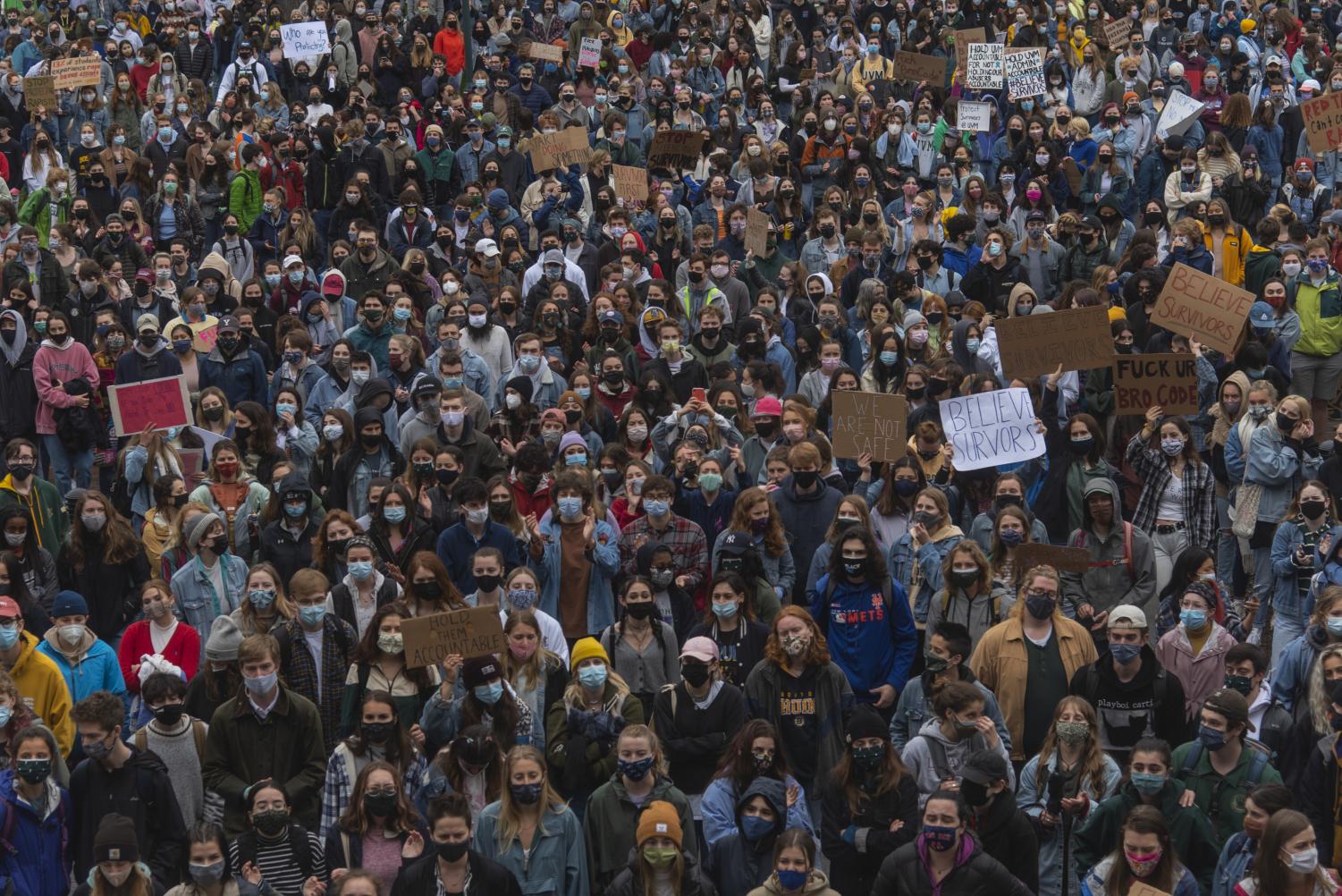 Thousands of student protestors filled the steps of Waterman building and flooded out past South Prospect Street and onto the Waterman Green May 3. (Mary McLellan)

Thousands of student protestors filled the steps of Waterman building and flooded out past South Prospect Street and onto the Waterman Green May 3.

Thousands call on UVM to reform handling of sexual violence

Thousands gathered yesterday to protest a widely-perceived repeated administrative mishandling of sexual assault cases at UVM, following a week of rapidly mounting outrage that has overtaken the campus climate.

Led by the chants of junior Athena Hendrick and senior Cobalt Tolbert, a crowd of approximately 2,000 people, according to UVM Police Chief Tim Bilodeau, flooded the sidewalks, pathways and roads as they banged pots, lifted signs and demanded that UVM act.

Chants could be heard carrying across campus as the protestors walked their planned route from Redstone Green to the Waterman Building, UVM’s administrative headquarters, as part of the May 3 walkout. Tears and hugs were shared among crowd members, as they stood together in solidarity with survivors at the Waterman Building.

“We are here because we love survivors,” Hendrick said, as they stood atop the steps of the Waterman building overlooking the sprawling crowd.

“I’m angry because of all the people that have been hurt, and I’m afraid because I don’t know how to keep them from being hurt, and I’m grieving because I know the loss happening and I don’t even know all of it but I know so much,” Hendrick said.

But despite these feelings, Hendrick said they also feel gratitude for the people they love and hope for a brighter future.

The walkout was organized by the UVM Union of Students in collaboration with Decolonize Burlington, Explain the Asterisk, UVM Empowering Survivors, UVM Missed Connections and the UVM Women of Color Coalition, with endorsement from nearly 50 other student organizations.

Hope Works, a Chittenden County-based group that serves survivors of sexual violence, also had several victims’ advocates on site at the event to support protestors, and there was an additional affinity space nearby to serve survivors in need.

After Hendrick and a few others spoke, they passed the mic to UVM graduate student Robin Rice, who addressed the crowd as a male survivor of rape and advocate for men’s education surrounding these issues.

After several hours as the crowd dispersed, event organizers facilitated an open mic and invited numerous remaining crowd members and survivors to come up to the steps and share their stories.

The movement gained traction when Hendrick shared their story on Instagram April 25. Hendrick stated in the post that they were raped by Austin Weiland. Since Hendrick’s initial post, at least two others have come forward online publicizing Weiland’s name as their abuser.

“I shouldn’t have to do any of this, we should just not have a rapist on our campus,” Hendrick said. “But here we have a serial rapist who has raped three people since my Title IX investigation told me that I did not have enough evidence.”

Weiland did not respond to the Cynic’s requests for comment.

Inspired by Hendrick’s story, at least three dozen other survivors at UVM have followed in sharing their stories, making posts about their own experiences with sexual assault on their Instagram accounts.

These Instagram posts, in addition to a viral TikTok made by survivor and senior Carrie Finkelstein, garnered many comments from prospective students saying they are no longer considering UVM.

“I posted a TikTok and it has accidentally cost the school over a million dollars in tuition because about 20 people have DMd me saying, ‘I was thinking about coming here and I’m not anymore,’” Finkelstein said.

Many others stated in the comments that they were no longer considering going to UVM.

“I was happily able to deter a few students from coming here next year,” Finkelstein said.

Finkelstein is one of several founders of a new Instagram account dedicated to sharing anonymous stories of survivors at UVM called @shareyourstoryuvm.

“It shouldn’t have gotten to this point, but I’m glad that something’s finally being done,” she said.

Last week a variety of initiatives formed in response to the movement that initially began online.

SGA passed an emergency resolution April 27 condemning UVM’s handling of sexual misconduct and calling on the University to perform an internal investigation to address these failures.

“UVM has consistently failed to take meaningful action in high-profile sexual misconduct cases on campus,” the resolution stated. “This inaction from the University towards cases of sexual misconduct damages the faith that sexual assault survivors have in UVM, further contributes to underreporting and hinders justice.”

The resolution stated that UVM was among the 10 schools with the most rape reports in 2014 and that UVM offers fewer resources for survivors than do other comparable institutions.

In addition to calling for an internal investigation, the resolution called on the University to hire additional Campus Victims’ Advocates. Currently, there is only one.

“At least hire at least one more fucking campus victims advocate because having one for 11,000 students is just appalling,” Finkelstein said.

The UVM Student Title IX Advisory Committee released a more comprehensive list of demands April 30, which SGA has since reposted and amplified. SGA Recognized Student Organization club signers have since independently released a joint statement and reiterated the demands on their website.

In addition to the calls to action made by the SGA resolution, the UVMIXAC list also demanded that UVM create a Sexual Violence Response Team, a 24/7 hotline for student survivors of sexual violence and require every CAPS counselor to undergo annual training to support survivors.

UVMIXAC also demanded that the admin review every anonymous survey response from their Title IX Survey which was released April 7. The survey was created by senior Syd Ovitt, the founder of a sexual assault awareness and advocacy group known as Explain the Asterisk.

One of the founders of UVMIXAC, junior Caroline Shelley, said she knew she needed to make the demands and the petition, which has over 7,000 signatures as of May 4, when the administration referenced UVMIXAC as a resource in an April 29 email to the student body.

“We hear you, and we recognize that giving voice to incidents of sexual misconduct is difficult,” stated Title IX Coordinator Nick Stanton and Vice Provost Erica Caloiero in the email. “We are reinforcing current actions and implementing new efforts immediately.”

Shelley found this initial email unsatisfactory, she said. To her, it seemed that the administration was passing off responsibility onto student-led initiatives rather than taking matters into their own hands.

“[Administrators] did not consult with me before they sent out that University-wide email,” Shelley said.

Shelley also created denim day two years ago as an SGA event at UVM, an event that was held last week. Denim day is a widely celebrated event that falls on April 28, in which survivors wear denim in order to show support for survivors during sexual assault awareness month.

Shelley has met with many upper-level administrators and folks from the Title IX office in the last few days, and will be meeting with UVM President Suresh Garimella this week, she said.

“As always [when] working with administration, I’m cautiously optimistic,” Shelley said. “This time really feels different. I think that it’s a shame that it took this many students publicly sharing their trauma online […] for administration to finally listen to us.”

UVM stated they will agree to each of the UVMIXAC’s demands in a May 3 email to the UVM community.

“We have heard numerous concerns regarding the University’s sexual misconduct prevention, reporting and support services,” Provost Patty Prelock and Caloiero stated in the email. “We value the perspectives that have been shared with us and commit to developing immediate and long-term solutions to the issues raised.”

The Instagram account @justiceforkendallware also released a statement from Ware herself May 3, in which she stated that she stands in solidarity with each and every one of the survivors.

“The past few days have been spent in awe of my fellow students coming forward with their stories of sexual assaults,” she stated. “I continue to be angry about the administrative failures that UVM refuses to acknowledge.”

Ware had a high-profile sexual misconduct case that she said was mishandled by the UVM Athletics Department during fall 2019.

Molly Gray, VT Lieutenant Governor ‘06, also Tweeted her support for the survivors at UVM on May 3.

“I see you, and I believe you,” Gray stated. “Your stories and experiences matter and you deserve to be heard, supported and protected.”

While much collective action has taken hold of the UVM community online, physical chalk messages and graffiti have visually shrouded UVM’s campus over the last several days, most of which directly call out UVM for its handling of sexual violence.

More chalk messages and caution tape enveloped the Waterman building May 3 during the walkout as protestors added to the campus-wide collection of messages that had been accumulating over the course of the last week.

UVM Physical Plant has been routinely power washing these messages away.

“Whenever someone defaces something on campus, I have to respond and wash it off,” said an anonymous Physical Plant worker who was removing spray paint from a building on campus.

Finkelstein said they see the removal of the chalk messages as a free speech issue. Similarly, a staff member recently said that UVM administration has been regulating other forms of speech surrounding sexual violence among employees.

“Living Well is being advised that we cannot say that ‘we believe survivors,’ and that it has to be, ‘listen to,’” said Living Well sex educator Jenna Emerson at the walkout planning meeting April 30. “It’s fucking sickening and I’m so sorry.”

Emerson said she has been told this is the case for legal reasons.

However, John Paul Grogan, Outreach Director for the Center of Health and Wellbeing, stated in a May 4 email that this is not the case.

“We did not receive that guidance and we did post a Believe Survivors message on the CHWB Instagram (@bewellUVM) yesterday morning to be in alignment with the WAGE Center and other resources on campus who are directly involved in supporting students,” he stated.

Despite the thousands of students and staff who have expressed dissatisfaction with the University’s resource offerings and handling of reported sexual assault cases, UVM stated that a variety of support and reporting options are available in their April 29 email.

“To be absolutely clear, the University of Vermont does not tolerate sexual misconduct in any form,” the email stated. “We respect the rights of both parties to be fully and fairly heard, and to be supported as campus community members without pre-judgment.”

In the April 29 email, they stated that they would review and assess current systems in place for the handling of sexual misconduct, formalize and create committees focused on sexual violence and enhance trauma training for employees.

On April 30, Stanton and Caloiero sent another email stating an announcement that there would be a working group of students and staff held May 1 to create additional solutions.

“We recognize that many of you are seeking further information and an immediate response,” they stated.

On May 3, just four minutes before the walkout began, Caloiero and Prelock sent a response to the UVMIXAC’s demands out to the UVM community, agreeing to each and every demand.

“We value the perspectives that have been shared with us and commit to developing immediate and long-term solutions to the issues raised,” they stated. 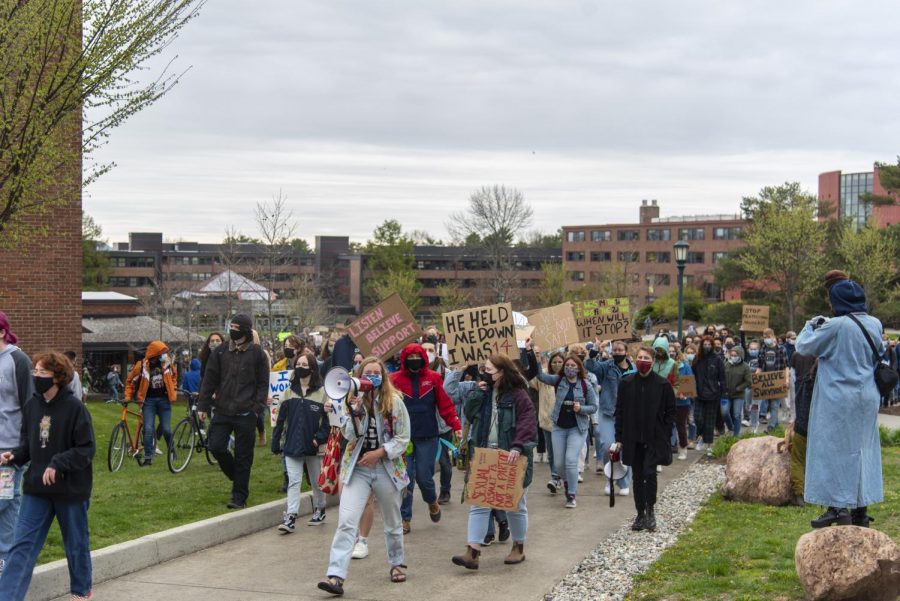 Gallery|5 Photos
Mary McLellan
With junior Athena Hendrick leading the crowd the protesters began flowing out of the Redstone Green to begin their walk out May 3.