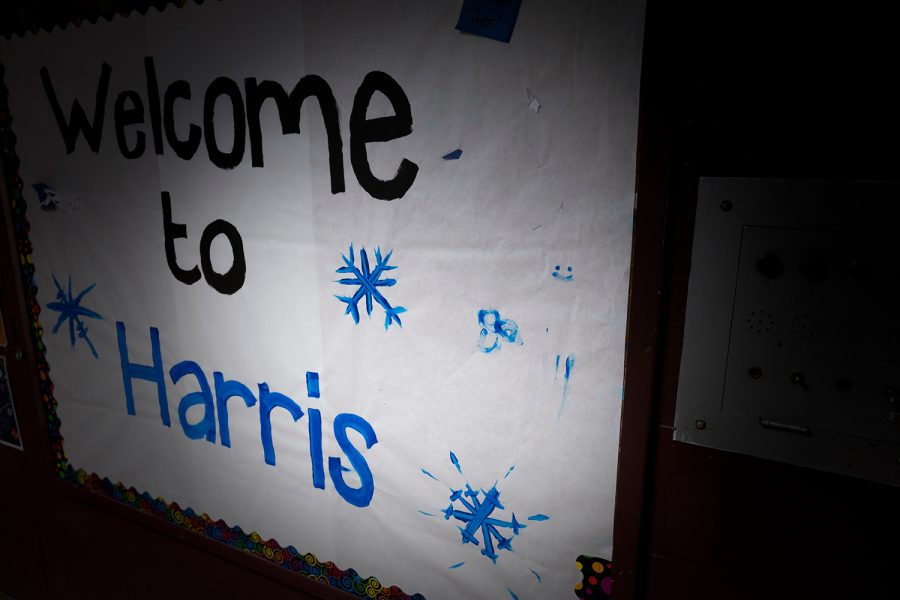 A sign welcoming students to Harris Hall, seen Feb. 13. On the right hand side of the sign a painting of a penis can be seen.

On Thursday, Feb. 13 members of the Cynic staff observed more than 40 ceiling tiles missing from several dorms, trash left in halls and graffiti on the walls.

Walking into Harris Hall, Cynic staff were greeted by a penis painted on a “welcome to Harris sign.”

For the month of January and first half of February, nearly 20 vandalism incidents were reported around UVM’s campus.

In January,  13 separate vandalism incidents were reported, three times more than in January 2019.

In police reports obtained by the Cynic, incidents of vandalism on campus ranged from a sticker promoting a white nationalist hate group, a broken window and a possible attempted break-in of a UVM Dining kitchen.

“I responded to a call that a Patriot Front sticker had been secured to one of the light poles in the area between Dana Medical Library and Howe Library,” UVM police officer Kevin Digiorgic stated in a Jan. 27 police report. “I know that the FBI tracks the Patriot Front, and I reached out to my FBI contact.”

According to a Jan. 22 police report, damages to a Marsh-Austin-Tupper common area kitchen totaled $1,500.

“The left upper door [of the refrigerator] had been ripped from its hinges for no apparent reason,” UVM police officer Sue Roberts stated in the Jan. 22 police report.

Of the 13 incidents, three occurred in the bathrooms and hallways of Given Building next to the UVM Medical Center.

“When I arrived…I did notice a hole in the first stall,” Digiorgic stated in a Jan. 28 police report. “The hole was made by an individual kicking the wall.”

An attempted break-in was reported at a UVM Dining Kitchen Jan. 22.

“Kitchen staff had advised that the door was closed and secure when they arrived but the handle was bent down severely,”  the Jan. 22 report stated.

The estimate of the cost to replace the lock was $350.

The far majority of the reported vandalism incidents for the month of January have occurred in Harris Hall, Interim Police Chief Tim Bilodeau said.

“I don’t know all the factors involved as to why there’s a particular spike,” Bilodeau said. “It looks like there is a group of folks who are going an extended period of time without being held accountable. The spike isn’t going to continue.”

A troubling month in Harris Hall

Three of the reported vandalism incidents in January, from broken ceiling tiles to arson, have occurred at Harris Hall. The incidents have caused disruption for students and staff alike.

Vandalism at Harris Hall was first addressed by UVM Department of Residential Life after three incidents were reported to UVM Police Services. An email was sent Oct. 11 from Tahn Lemish, area coordinator, concerning the spike.

The email stated instances of apples and other fruits left in the halls to rot or smashed over the walls, broken ceiling tiles and exit signs, and male genitalia drawn on walls, bathroom signs and bulletin boards.

It also cited bulletin boards with parts torn down, bathroom and other University signs torn down and condoms left in front of residents’ rooms.

“I am sorry that residents and the guests of residents are destructive and immature,” the email stated.

A list of resources for students to “explore” was included in the email, such as UVM Counseling and Psychiatry Services, Intramurals and Recreation and the Interfaith Center.

Since October 2019, vandalism incidents have increased, according to the 2019 and 2020 UVM Crime Logs.

“We don’t necessarily patrol within a residence hall without it being a directed thing,” he said. “It looks like there is a group of folks who are going an extended period of time without being held accountable.”

“As we walked the halls, we observed several more damaged ceiling tiles in Harris that were not there the previous night, several broken exit signs and several puddles of urine. Many paper signs were torn off doors,” the report stated.

The estimated cost of damages from the night of Jan. 19 alone was $190, according to the report.

Director of Residential Life Rafael Rodriquiez declined to share the total amount in damages that have been calculated so far.

First-year Harris resident Liam Duvally has seen the aftermath of some of the vandalism incidents.

“Definitely the most prevalent were the ceiling tiles,” Duvally said. “That was like becoming a weekly thing where people go around punching ceiling tiles and leaving them all over the floor.”

Duvally said around winter break there was an incident involving a sex doll on his floor.

“Someone put like a sex doll on the ceiling,” he said. “I guess it kind of looked like a real person that was kind of hanging, so it kind of scared a lot of people.”

At 1:37 a.m. Feb. 9, UVM Police and the Burlington Fire Department responded to a fire in Harris Hall. Officers found paper decorations on the first and second floor had been lit on fire, according to a Feb. 9 email from UVM Police.

UVM Police announced it had cited five UVM first-year students into court for arson. But one day later, the Chittenden County

Rodriguez said he does not think the incidents are related.

“I don’t know that that is all necessarily connected,” Rodriguez stated. “It’s a culture that I think is consistent with apathy and I think that other students who are in the halls are not stepping up to hold each other accountable.”

Duvally said he doesn’t think the vandalism is a part of a specific plot or intentional.

“I don’t know, I think they drink a little bit and are like, ‘let’s go do stupid stuff,’” he said. “I don’t think there’s any real malicious intent behind it.”

After Harris Hall’s spike in vandalism incidents, the Department of Residential Life is weighing a financial consequence for the entire hall.

Director of Residential Life Rafael Rodriquiez said there is a growing cost of the vandalism incidents.

“We did away a couple of years ago with unassigned damage costs, which basically looks at the entire damage to anything in the community and splits it among residents,” Rodriguez said. “Given the trend, we are absolutely exploring whether or not we will bring back unassigned damages.”

Rodriguez further spoke of the process for students who are caught participating in the vandalism incidents.

“If individuals are found responsible with any kind of signage that has been torn down they will be put through the conduct process because it is considered theft of property. There’s a $500 fine attached,” Rodriguez said.

If the vandalism continues, there may be a further escalation, Rodriquez said.

“If there are enough violations and vandalism in the halls that it is causing damage to the community and putting human safety at risk, that may result in removal from the residence halls,” Rodriguez said.

Interim Police Chief Tim Bilodeau said the spike in vandalism at Harris Hall may be a symptom of something larger.

“It sounds like there may be some issues around a group of students really getting away with something,” Bilodeau said. “If you don’t identify the people directly responsible then it continues.”

Vandalism incidents on campus, classified as general or bias-related, are investigated differently based on intent.

“Get a complaint, send a police officer, assesses, gets complaint information, develops context,” Bilodeau said. “If it’s like a ceiling tile and there’s no cameras or anything then you can talk to someone who might be near. You try to ID a witness–camera, that kind of thing.”

The way hate crimes are investigated is slightly different.

“When we have hate crimes, we notify the FBI because they monitor hate groups,” he said. “It’s not a common investigation but it’s part of what we do.”

The other classification of vandalism at UVM is bias-related vandalism. A bias incident is any action that targets a certain identity in some way.  Racism, sexism, homophobia and other biased or targeted expressions fall under this heading.

Bias-related incidents at UVM are referred to the Bias Response Program.

Annie Stevens, vice provost for student affairs, is part of the team that reviews the incidents.

Unlike Student Conduct, the program cannot give consequences for incidents. Instead, it is in place to facilitate educational conversations with students who have been reported for causing a bias incident, Stevens said.

“It’s free speech if it’s not a policy violation or a criminal violation,” she said. “But we’ve had some really good moments with some students.”

The UVM Crime Log catalogs all incidents that are reported to UVM Police. The yearly logs, which are public record, track everything from reports of drug use, vandalism incidents, intoxication, stalking, sexual assault, etc.

The crime log is available on UVM’s website. Yearly logs that date back past 2019 are not available for the public to view.

Director of Residential Life Rafael Rodriquiez said he has seen an increase in vandalism in the last few years.

“I would say broadly as a department we’ve been seeing a gradual increase in vandalism over the past three years,” Rodriguez said. “I do say gradual because that’s what we’ve been able to track.”