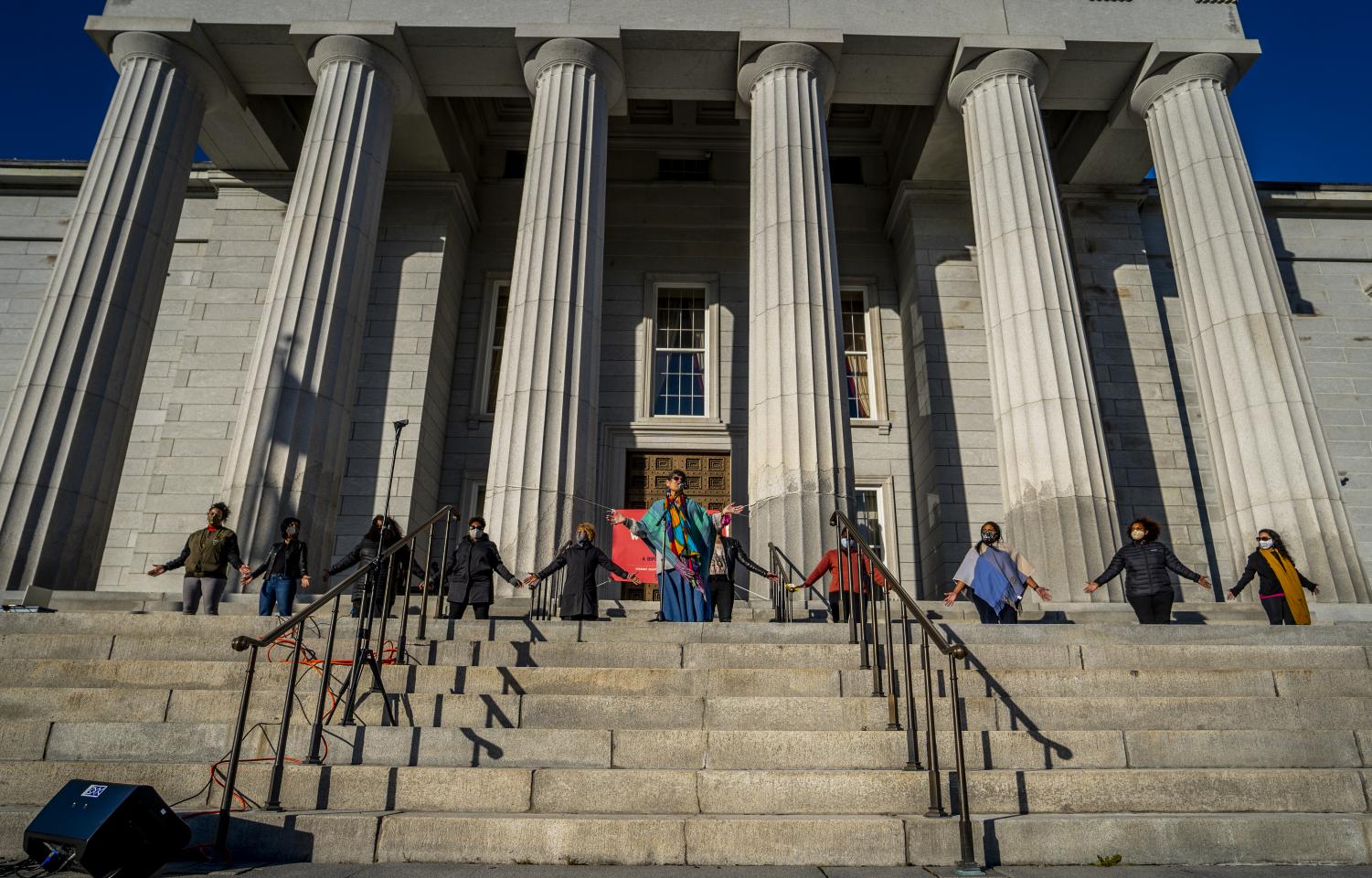 Organizers and speakers of the “Womxn and Femme March” stand as Beverly Little Thunder gives the closing speech of the event Oct. 17. (Sawyer Loftus)

Organizers and speakers of the “Womxn and Femme March” stand as Beverly Little Thunder gives the closing speech of the event Oct. 17.

The granite steps of the Vermont State House filled with people Saturday afternoon, calling on Vermonters to vote for Joe Biden in the upcoming presidential election and to fight for a more inclusive feminism.

The “Womxn and Femme March,” held Oct. 17 in Montpelier, was attended by roughly 200 people to protest the threat to women’s rights, highlighting the experiences of women of color.

Although the Montpelier march happened the same day as the national Women’s March, it distinguished itself as a variation of the national event because it aimed to be more inclusive of all gender, race and cultural identities.

“The ‘X’ in womxn is there for a reason,” said Organizer Jess Laporte. “The national Women’s March has taken a number of politically and socially centrist stances that have hurt their relationship with communities that have been historically marginalized.”

Because Vermont is one of the whitest states in the US, speakers highlighted the pressing need for Vermont to make Black, Indigenous and people of color feel welcome.

Activist and UVM student Harmony Edosomwan, condemned Vermont’s racist history and culture as she took the stage to read her poem “Vermont Sucks.”

Edosomwan said Vermont’s racism is cloaked by performative activism, and that people here only pretend to care about race to maintain their personal reputation.

UVM Senior Caroline Hoge who joined the crowd at the march, said she thinks a lot of UVM students also engage in performative activism.

Hoge encouraged students to come to events like this, but feels that UVM students don’t genuinely care about the issues they are protesting.

“A lot of people show up because it’s trendy and they want to post on their Instagram story,” said Hoge. “But they don’t show up after that.”

Organizers invited women to the microphone to share their personal experiences managing systems of oppression.

Zoraya Hightower, the first woman of color to be elected for Burlington’s city council, said that she is constantly fighting racism and sexism in both her personal and professional life.

Another student that attended the protest, UVM Senior Sade Bolger, said that events like these have allowed him to de-center his voice as a white person.

“My own upbringing has been whitewashed to a large extent I think, and it’s been in showing up to these movements that I’ve kind of stepped back to listen to other people’s experiences,” said Bolger.

Other speakers shared their first-hand experiences with islamophobia, transphobia and the oppression of indigenous people.

As the organizers called on protesters to vote for Biden in the upcoming presidential election, they stressed the danger of Supreme Court Nominee Amy Coney Barrett, whose inauguration could put the legality of abortion and gay marriage on the line.

“My bodily autonomy, my life as a Black woman, the continuing republican-led assault on voting rights is an assault on my liberty as a gay woman,” said CD Mattison, another speaker at the event.

“This has been a plan from people in the conservative community for a really long time,” Leriche said. “And we’ve been sitting back saying, ‘we’ve got a safe Supreme Court we’re earning all these rights. This could never happen in America.’”

Although speakers encouraged protesters to vote for Biden, they cautioned that there will still be work to do no matter what.

“When we vote out Trump, we need to work just as hard to ensure that we’re dismantling the structures and the systems that allow people to target people in the first place,” said Asma Elhuni.

This article was updated on October 21, 2020 at 10:45 to more accurately represent a sources relationship to an activist group and correct the last spelling of a last name.