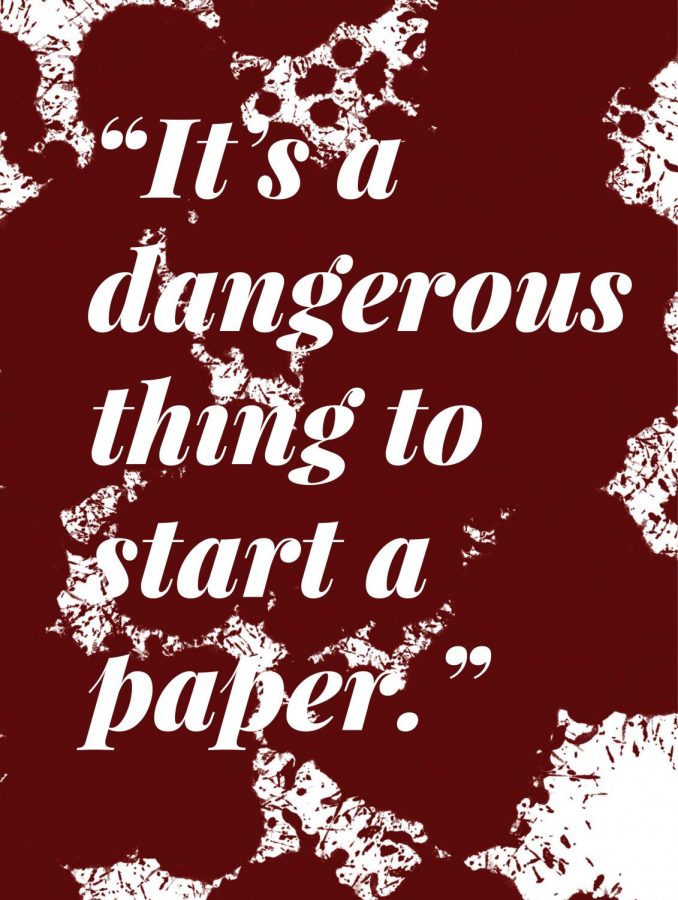 Letter from the Editor-in-Chief: The killing of independent student media at UVM

As I read these words etched across a March 1883 edition of the Burlington Clipper, a weekly newspaper that used to run in the Queen City, the words echoed throughout my head.

This line comes at the end of a bit of news. Students at the University of Vermont, just at the top of the hill, as they used to refer to the University’s campus, had passed around a circular that month saying they intended to start their own newspaper.

The editors of the Clipper added the line as a bit of parting advice for the founders of what we now know as the “Vermont Cynic.”

Two months after these lines were published in the Clipper, the first issue of what was known as the “University Cynic,” hit the stands.

Run by the students of the University, the publication has continued to do so.

But now, over a hundred years later, a publication created for students, run by students and written for students is under attack.

Whispers of potential changes as to how the Cynic, WRUV and UVMTv would be advised first came in July when our adviser Chris Evans, whose sole job was to be the Student Media Adviser, left UVM after more than a decade in the position.

Less than a month after our adviser’s departure, Provost Patty Prelock redesigned the advising role.

The redesign, made without the input or consent of student media leaders or the Department of Student Life, moves the position to the College of Arts and Sciences where a lecturer will split their time between teaching and advising three diverse media organizations in an attempt to integrate student media with the budding Reporting and Documentary Storytelling minor.

Effectively, the move puts all student media and especially the Vermont Cynic’s independence at risk.

When student leaders heard the initial whispers of change, we signaled our concerns, but they fell on deaf ears.

By the second week of classes, the University’s forceful takeover of independent student media was complete.

Our new adviser was selected without asking us, or seeking our input or advice.

We begged for weeks to meet with the Provost to explain why the specific changes to our adviser’s role would be ultimately detrimental not only to the student media organizations, but free speech and a free press as guaranteed under the U.S. Constitution.

The biggest concern here is an illegal practice called “prior review,” which is the most specific and probable way the administration can infringe on our right to operate independently.

According to Mike Hiestand, senior legal counsel for the Student Press Law Center, prior review is the practice of school officials, or anyone outside of an independent student news publication, demanding to review content before it is published.

The scariest thought however: the power that sits just overhead of our new adviser’s head.

Although repeated claims have been made that this new adviser won’t be subject to administrative pressure, it’s difficult to trust this claim when the adviser answers directly to a dean of a college.

When we asked the Provost why our adviser would answer to Dean Bill Falls, Provost Prelock said it was so the adviser “wouldn’t be influenced by the faculty.” It’s difficult to see how that doesn’t work from the administrative side too.

What’s stopping Dean Falls from exerting his pressure on our adviser, or the will of another upper level administrator?

Instead of working hard to meet with the students most directly impacted and concerned by these changes, the Provost instead appointed this adviser without the consent of the leaders.

Perhaps the most concerning change to the position is who exactly our new adviser directly reports to in their capacity as our adviser. Their supervisor is the Dean of the College of Arts and Sciences Bill Falls.

This is a disgusting administrative abuse of power.

The adviser to the independent student newspaper, reports to a high-level administrator. Just let that sink in.

I write this, because when asked what guarantees she’d put in place to protect press freedoms, such as ensuring no prior review of content by faculty, staff or administrators, Prelock responded by asking for our trust saying she had no time to read our articles beforehand.

How can we trust and respect administration when they don’t trust or respect us enough to offer us a seat at the table?

This reorganization at its core seeks to “greater align” the three media organizations with a stronger journalism curriculum and academic program, effectively integrating student-run clubs into academia.

By bringing the Cynic closer to the administration here at UVM, they are killing our more than century-long history of independence.

But specifically, aligning the independent college newspaper with one particular school and academic program leads to the possibility of greater restrictions as to who can participate and what content gets to be published.

At the Cynic, we have a robust educational system that is built on real world experience. We welcome any student from any college, degree program etc, to join. If you show up, and you’re willing to put the work in to learn, we’ll teach you.

We did a quick poll of the editors before this editorial went to print, and surprise surprise, not a single one is in the College of Arts and Sciences’ Reporting, Documentary, Storytelling minor, nor did they say they wanted to be.

And to say our model has been unsuccessful is flat out wrong.

We produce top notch journalists and have some of Vermont’s most promising up and coming journalists in our midst right now.

The University’s forceful placing of a square in a round peg simply doesn’t work.

With the Provost’s redesign, student-owned and operated media has been brought into the College of Arts and Sciences. Prior to these changes, student media lived independently in the Department of Student Life, a way to keep our adviser neutral.

At the Cynic we take particular anger with this portion of the changes, as we’re the underdog in this situation. We know you won’t always love what we write, or agree with our reporting, but the fact that we get to write and report free and unfettered by the University Administration will effectively end here.

We have been asked by the Provost and Falls to just trust them and then in Fall 2021 we can all go back to the drawing board. The Cynic’s answer to that is a fervent hell no.

As journalists, one of the first lessons we learn is to not trust a source. We develop that source, work them, until we know their information is credible and they’re trustworthy.

Our job as journalists is to question authority, hold them accountable and tell the stories people need to hear.

In our profession, trust is a precious commodity. It’s not given lightly; it’s earned.”

We sit and watch, take notes and write compelling stories. At times the University doesn’t like that and it’s hard to see this move as anything but an attempt to control what we write.

The Cynic is not alone. Leaders from WRUV and UVMTv have expressed their concerns over having an adviser selected and appointed for them, that has no knowledge of what their organizations do.

In a statement, Katie Masterson, station manager of WRUV said she’s particularly upset that much of the correspondence and language that has been shared centralizes on enhancing the journalistic aspects of all three student organizations.

“We are not journalists, nor a journalistic venture as your [Provost Prelock’s] correspondence so often cites us as,” Masterson wrote. “We are a member of the Student Media Association, an association of independent student run organizations, who celebrate the beauty of freedom of expression.”

For Masterson and the leader of UVMTv Daisy Powers, the student media adviser needs to have the technical expertise to help with production. The currently appointed adviser does not have that.

Powers said in a meeting with student media leaders and the Provost that UVMTv doesn’t need help making connections with other folks at UVM or the world beyond.
Rather, UVMTv needs an adviser that has robust experience in multimedia production and can help with the production of their videos now.

At WRUV, there’s a heightened need for the media adviser to know their stuff, specifically the ins and outs of the Federal Communication Commission’s rules that govern the public airwaves the tunes from WRUV travel through.

“Associating our student-led and programmed radio station with an academic program will destroy the fabric of what WRUV is and will ultimately lead to the detriment of students,” Masterson said. “I am disturbed and astonished at the obvious failure to incorporate students in a decision about their own organizations, seeing as we are working professionals who have been successful running these organizations for the betterment of the UVM name.”

Because of hiring freeze in place at the University due to the pandemic, the Provost has said this is the easiest solution. 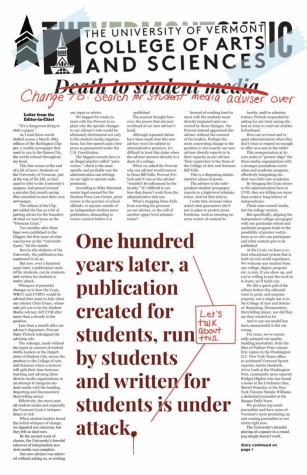 It’s easier for them to redesign our whole advising system rather than hire someone to fill a pre-existing, open position in the Department of Student Life.

We are the experts here, not you Provost Prelock.

When President Suresh Garimella first granted an individual interview with the Vermont Cynic back in August of 2019, he told us his “North Star” was the student experience.

“My top priority is the student and their success, which means that we should offer them the highest quality of education we can,” Garimella said.

We fail to see how these changes, under his leadership, have student success in mind when students were actively excluded from the conversation.

We do not accept these changes placed on us, to restrict us.

We will not be silenced or face the threat of silence.

The student journalists here at the Cynic know the risk and take it to heart, because we have an obligation to continue pushing for answers, exposing injustices and fighting for the truth.

That’s what a generation of Cynic journalists have done before us, and what the generation after us will continue to do.

We won’t allow the University to turn us into their propaganda, spewing phony journalism farce.

What we want is clear: we want a seat at the table.

We want the administration to hire a new adviser and place them back in the Department of Student Life.

We want to be taken seriously as student media professionals, as campus leaders.

We want a fair and open process.

We want our independence back.