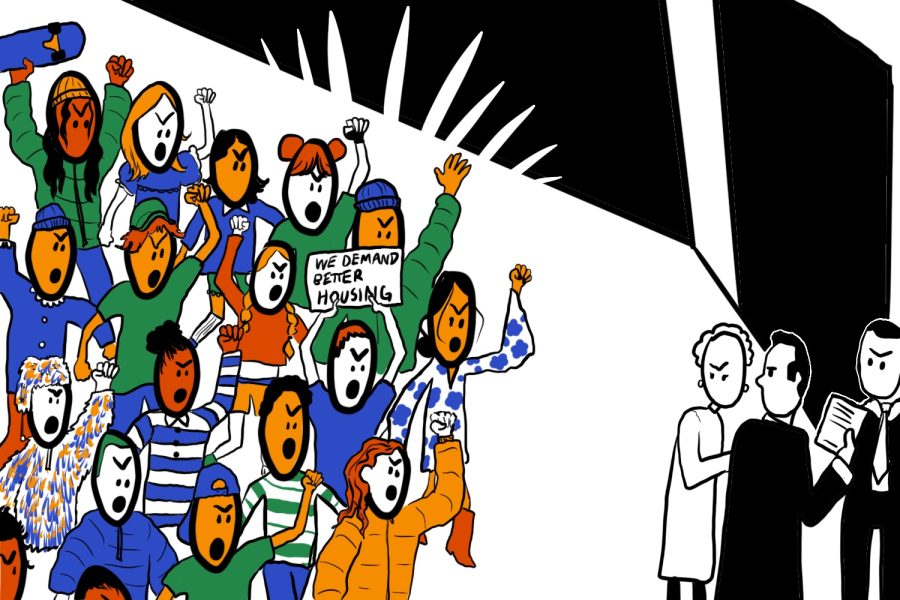 One year ago, the Burlington Police Department announced a mass eviction of the more than 40 residents of the Sears Lane houseless encampment, a tent city occupying public land in Burlington’s South End.

One year ago, a crowd of nearly 100 housing activists converged on the encampment and, through the power of their physical presence, prevented the city government from removing the camp.

For three months, a loose coalition of eviction defenders from around the city and state made a habit of meeting police at the camp whenever an eviction was announced, protesting and delaying the eviction. The protests ended with the police department’s callous destruction of the camp in mid-December 2021.

This was not a flash-in-the-pan, individualized, local conflict. Both the eviction announcement and the subsequent mass eviction defense were manifestations of a years-long housing crisis that has festered like an infected sore since the start of this pandemic.

The circumstances of this crisis were created by austerity measures implemented during the Reagan Administration, and the results are erupting around us, especially here at the University of Vermont.

Due to the unique intersection of social groups occupied by college students, we get to live through three housing crises: one at the national level caused by Reaganomics, one at the city level spurred on by the COVID-19 pandemic, and one at the University level funded by venture capitalists and Residential Life public relations ghouls.

We know we cannot solve problems posed by decades-old housing policies that created the wealth of some of the richest men in America. But we know what we saw at Sears Lane, and we know what we see at this University every single day.

Everyone on this campus has a housing disaster story. We made the Instagram account, @UVMHousingHell, based on that understanding. Everyone in this university has been put through their own housing nightmare by landlords and ResLife.

In our short time running the account, we have come across story after story of poor maintenance, inaccessibility, gaslighting and price gouging, among so many other abuses. The following is a brief series of grievances that we have compiled from the account and our personal experiences against the real estate fascists running ResLife.

It is by no means a comprehensive list of the institution’s failures and shortcomings. We understand that our inability to fully compile those wrongdoings is because of the vast scope of ResLife’s cruelty. This list is one of overarching themes that permeate all of the institution’s behaviors.

Unfortunately, UVM’s administration does not respond to earnest appeals or grievances. Administrations respond only to organized action.

This is why we, the UVM Union of Students & UVM Housing Hell are forming the Student Tenant Union. We come from every campus, every college, in-state, out of state, international, off-campus, on-campus, residents and RAs. We hope to be a coalition of all students fighting for UVM and ResLife to change.

UVM rarely bows to public pressure. However, committed work from students has been able to secure victories before. We must speak together to demand that ResLife values us while simultaneously building the power to force UVM to listen.

We do not care what UVM claims to be “committed to” here. This is a housing crisis and the administration cannot listserv their way out of it.

There are 25 people who run UVM: the board of trustees. They’re a combination of egotistical politicians, Wall Street vampires, tech millionaires, accomplished but disconnected alumni, and two students trying their best.

They meet twice during the school year, with what seems like just 15 minutes of public comment per meeting. There is only half an hour or so every year for people in the UVM community to face these distinguished figures that make our housing hell. We must use this time wisely.

This semester, the board of trustees will hold its meetings on October 28 and 29.The meetings being held during one of the biggest party weekends of the year is not a mistake—they think we are too busy enjoying ourselves to care about the policies affecting our lives. They don’t seem to understand that we can do both.

We will be in the Silver Maple Ballroom on Oct. 29 at 9:30 a.m. to support the brave public commenters who will be facing the Board with their grievances. Fight through your Halloweekend hangovers and join us. We will continue to put pressure on this administration until their abuses end.