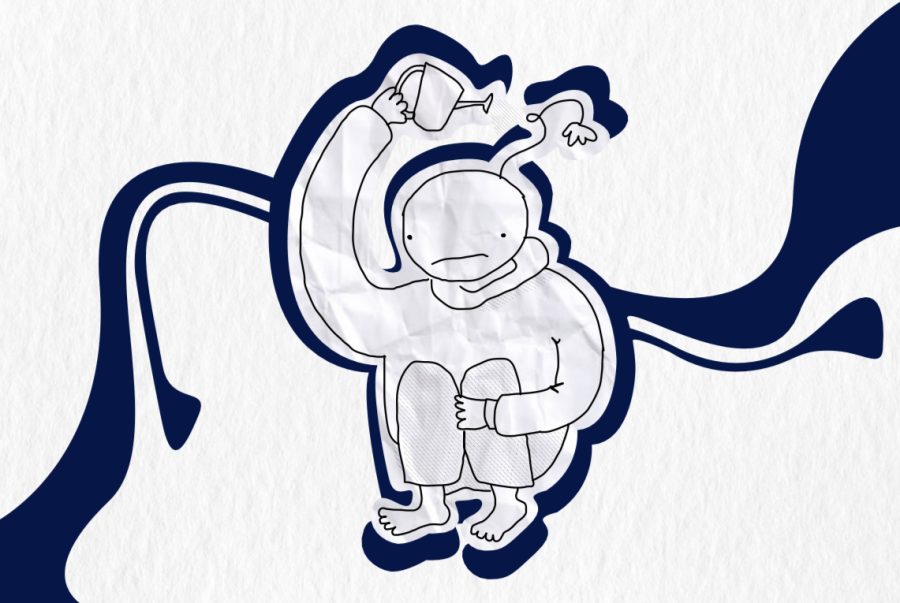 The journey to self-love after sex trauma

You can’t talk about sex in college without talking about the painful part.

I was a naïve little first-year, excited for all that college had to offer and trying my best to stay optimistic despite the masks and online classes that came with starting college in 2020.

Then I was sexually assaulted. All the optimism and happiness disappeared.

The immediate ripple effect was like nothing I ever could have imagined.

It started with sadness.

I cried at least ten times a day for a month. I woke up with tears in my eyes and went to bed sobbing.

I refused to eat. I don’t normally eat breakfast, but then I decided to just stop eating lunch, too.

When I went home during that year’s winter break, I’d have three bites of food and then I would start to feel nauseous. I’d claim I wasn’t hungry, which was true, but I was very aware that I was hurting myself.

When my parents started to notice I hadn’t been eating, they offered me all my favorite foods. They bought me burritos from Chipotle and cheeseburgers and milkshakes from Five Guys.

I would stare at the food for five minutes, finally build up the courage to take two bites and then go cry in my room until my mom came to console me and beg me to eat more.

The same cycle was repeated until not even half of my food had been eaten, at which point I would have to give up. Eating was exhausting.

After a long and painful winter break, it was finally time to go back to UVM.

The first week back, I was simultaneously spiraling and thriving. Being with friends and having independence was fun, but my issues didn’t disappear the way I wanted them to.

At this point in time, I didn’t even realize yet that what happened to me was sexual assault.

One night early on in the semester, I was with some friends and started telling them the story, just thinking of it as a silly anecdote from my life. Then the switch flipped and I realized what happened.

I broke down in tears, violently screaming, “why did he do that? Why did I let him do that?”

I sobbed for over 30 minutes, crawling on the floor and breathing heavily.

Okay, great. Now I know what happened. But what the fuck do I do with this information now?

The truth is, it took me a very long time to figure that out. The rest of the semester was a disaster. I felt like I was dissociating the entire time.

I tried to navigate hookup culture while still feeling the effects of trauma.

The last thing I wanted was for a boy to lay a hand on me. The prospect of ever having sex again was terrifying. On the other hand, I craved male validation. A big part of me wanted to get under someone else to get over what happened.

But when the opportunity came knocking, I tensed up, freaked out and immediately evaded the situation.

I remember flirting with a boy one night. We were laughing and moving closer towards each other. All of a sudden he put his hand on my thigh.

“You know what happened last time,” said a little voice in my head. “Don’t let it happen again.”

So I said I had to go to the bathroom. I didn’t come back.

I remember calling my mom and finally telling her what happened. She sat on the other end of the phone as I sobbed from 200 miles away. I called her daily for almost two months. I wasn’t used to relying on her like that.

Through countless tears, panic attacks and mental breakdowns, I got angry.

I hated what had happened to me, I hated the person who did it and I hated myself.

How could I have let this happen? Why me? What did I do that put myself in this position?

After a few draining months of brutally reliving the assault, I finally started to feel better and stopped blaming myself for what happened.

The days were still tough and I still thought about it every day, but I was functioning and felt like I was getting back on track.

Then something became clear that had implications outside of even just my own story: it publicly bubbled to the surface that UVM had a sexual assault problem.

All the progress I thought I made collapsed in front of my eyes.

Protesting and posting about UVM’s lack of support for survivors of sexual assault was exhausting and painful.

I never liked using the word “triggering” because I tried hard to minimize my experience. Surely what happened to me wasn’t as big of a deal as what so many other survivors face, I thought. Being triggered was reserved for them.

But triggering is exactly what it was.

The semester continued, but I could tell everyone around me was starting to realize the toll this had taken on me.

One night towards the end of the semester I jokingly—and drunkenly—told my friend I was gonna fall in love with myself.

I don’t quite remember how it came about, but that drunken one-liner set something off inside of me.

The next morning, I replayed those words in my head: “I’m gonna fall in love with myself.” It was a vodka-fueled joke I said to be silly, but sober me realized I needed a self-love journey, and I needed it badly.

But to be honest, I had no idea how to begin. I had never felt so low for so long. The past five months had felt like I was drowning.

For a moment, I was determined to pull myself out of my sadness.

I had this idea of what I thought self-love looked like: healthy meals, morning yoga and listening to “happy” music.

Unsurprisingly, my false idea of self-love didn’t work out the way I anticipated.

So I gave up on falling in love with myself. It was too hard and I wasn’t worth it.

I made it through the rest of the semester, barely scraping by. But there was some good that came about, too. I created beautiful friendships and made memories I will cherish forever. However, I will always remember that particular semester as a one of pain and hurt.

Coming home for the summer was terrifying.

My first time seeing some of my friends from home since the “incident” was interesting. It was exciting and fun, but I still wasn’t over what happened, and it showed.

When I finally told a good friend from home what happened, he told me that the second he saw me, he could tell I was different.

I remember blankly staring and really letting his words sink in.

I knew I was different, but I didn’t like that it was apparent to everyone else, too. If I’m different from how I was when all the people who care about me met me, what do I do?

I was so different from who I was a year ago. My innocence had evaporated and I didn’t know who I was anymore.

People are supposed to grow and change, but not like that.

This conversation was my tipping point. I felt really stuck.

It became clear there were two roads I could take: I could continue to sulk in my sadness, yearning to be the person I was before, or I could accept the change and start to heal.

Then the words I said a few months ago popped back into my mind: “I’m gonna fall in love with myself.”

Maybe I didn’t love the new me yet. I just needed to get to know her.

After I properly took the time to really mourn what I had lost and say goodbye to the girl I was before, I got to work.

I was a little more realistic about my self-love journey this time. No more forcing myself to be happy while putting on a show. I would honor my feelings and needs instead.

For me, step one was confronting what happened head on, which was an incredibly daunting task. I texted my assaulter and told him we needed to talk.

He had gone months without knowing what he had done and the gravity of the situation. I was sick of suffering while he lived normally.

We met and he listened. Fortunately for me, he acknowledged that he had really messed up. Although he will never be able to fully understand the consequences of his actions, his listening was appreciated.

That talk allowed me to take some of the power back, power I had been desperately craving.

There was some relief. I had been holding onto all the pain, sadness and anger for months. It didn’t go away, but all of a sudden the ball was in his court. I was tapping out—he could deal with it now.

Confronting him was one of the scariest things I have done but I knew I needed to in order to really start healing. I was brave that day, and that was one good thing about myself to love.

The next step was acceptance, and that was a hard one.

I had to acknowledge and accept that a lot of things—internally and externally—were different.

I was working hard to feel happy again, but along the way, I had to lose some of myself in order to continue to grow and heal.

The person I was before is not the same as the one I am now. But she’ll always be with me and when she comes back to say hello, it’s the most special reunion.

The decision to embrace the difference was sad and scary, but I knew I wanted my story to end with happiness, not pain. I lost some of myself along the way, but I discovered new parts of myself that are amazing, smart, silly, creative and beautiful.

All of a sudden, the sun started shining through the windows and the music started to play again. Things started to turn around.

I cut my hair—and even dyed some of it pink.

I started dancing again. I remember the first class when the instructor put on Lady Gaga’s “Born This Way” and told us to dance around. I was holding back but I had the biggest smile under my mask. I didn’t know what I was doing but I knew I was exactly where I needed to be.

Dance let me take back my body.

I threw myself into the Cynic. I started to feel the pride and purpose that came with sharing my thoughts and words. Then, I somehow ended up as the opinion editor.

I made new friends everywhere I went. With fewer COVID-19 restrictions, I was starting to connect with more people and make a life beyond what happened.

I kissed a boy again. It wasn’t a picture-perfect movie moment and I didn’t feel fireworks the way young adult romance books describe, but it was a sigh of relief. It was a reminder that there was more beyond what happened.

People still find me beautiful. Healthy human connection is still possible. I don’t have to be taken advantage of to be with someone.

The scars I gave myself faded. The weight I lost came back. My self-confidence grew into a beautiful bouquet of flowers. The passion I thought was gone forever sparked again.

I’m different than I was before, but different doesn’t mean bad—it just means different.

My road to self-love was filled with roadblocks, speed bumps and detours, but the love on the other side was well worth the journey.