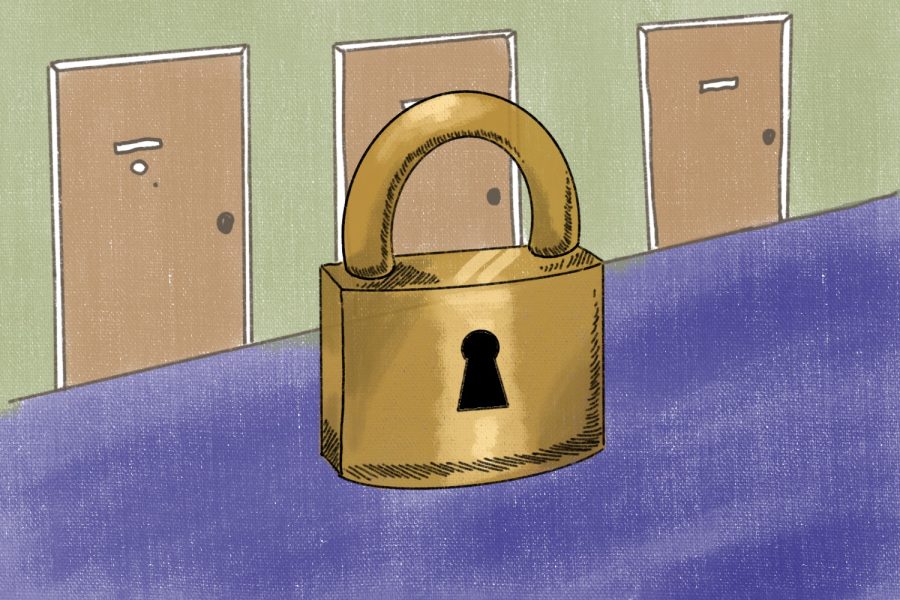 UVM needs to step up its security

A police officer knocked on my door a couple of weeks ago.

The officer asked me if I knew about a string of burglaries that had been committed on the floor I lived on. I apologized, explained that I had no idea what had happened, then he thanked me for my time and went on to the next unit.

This unexpected visit prompted me to look into the security situation at UVM.

UVM needs to make security on campus a higher priority to put their students’ safety and security first.

Over winter break and the first week after students had returned, there had been eight burglary complaints, five from the Redstone Lofts North building where I live, according to a Jan. 18 WCAX article.

The perpetrator stole hundreds of dollars of cash and gift cards, a bike, jewelry and other items from students in the Living/Learning complex, according to a Jan. 24 Cynic article.

The security at the Lofts has left much to be desired.

All of this made me unsurprised to hear that these burglaries occurred.

For UVM, however, these incidents of theft are nothing new.

Individual(s) stole $20,000 worth of audio and visual equipment from Patrick Gym just last summer, according to a June 29, 2021 VTDigger article.

Additionally, individual(s) stole one of UVM’s small electric vehicles used for transportation of items and abandoned it near Pine Street, according to the article.

Gavin Tyson of Rutland County ended up in handcuffs on April 14, 2018 for charges of grand larceny for a string of thefts in the Howe Library, according to a May 6, 2018 Cynic article.

Thousands of dollars worth of musical equipment were stolen from the Southwick Music Hall happened between Sept. 20 and 23, 2018 according to an Oct. 11, 2018 Cynic article.

A black rhino horn worth potentially hundreds of thousands of dollars was stolen from Torrey Hall around April 27, 2017 according to a May 6, 2017 Cynic article.

The list of these incidents goes on and on, and it infuriates me that UVM hasn’t done more to prevent future incidents from occurring.

Efforts like making sure all doors are locked and properly secured, installing security cameras outside entrances and increasing police patrols over breaks are some simple things UVM could easily do to protect us.

Unless UVM takes a stand and implements further security precautions like these, similar incidents are sure to follow.