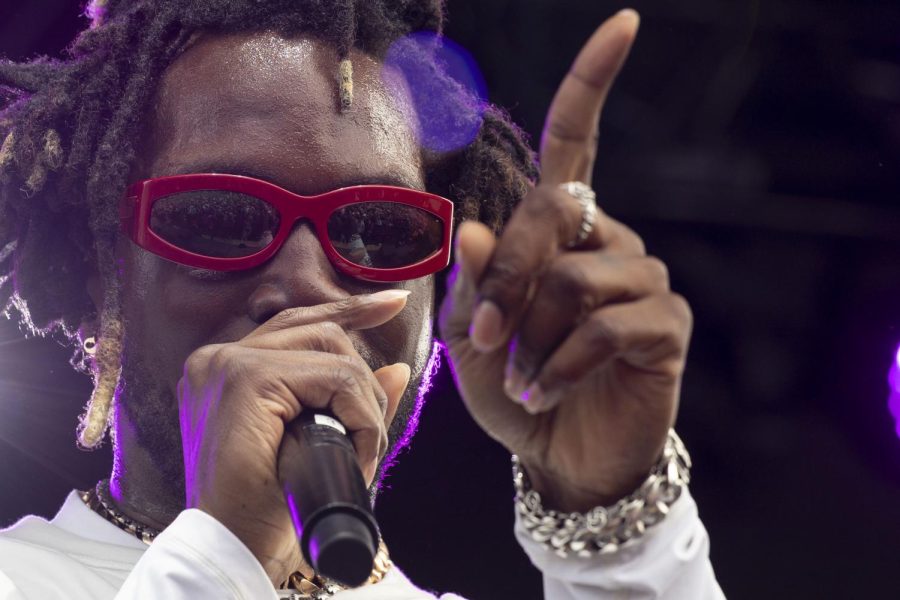 SpringFest headliner SAINt JHN offered a cannabis edible to whoever could sing his song in its entirety, after arriving 55 minutes late due to technical difficulties, he said.

“This is my first ever edible,” SAINt JHN said. “Whoever can sing this next song from top to bottom, we’re gonna pop ‘em together.”

He then extended a hand to a student in the audience and helped them onto the stage. He asked the student if they smoked. The student declined SAINt JHN’s offer.

“I mean, I’m not about to smoke right now,” the student said.

SAINt JHN also welcomed Billion, the 1-year-old child of his public relations manager, on stage during the set.

“I did like the child on the stage, I thought that was a cute touch,” first-year Ruthie Petzoldt said. “The baby was out there living.”

At one point, the crowd booed during the nearly hour-long delay preceding SAINt JHN’s set.

“In between Annie DiRusso and SAINt JHN there was a lot of time, which I think a lot of people got impatient about,” first-year Heather Clarke said.

SAINt JHN took the stage at 3:55 p.m. and played popular songs including “Monica Lewinsky” and “Roses,” the latter of which went viral on TikTok.

“The songs that he played were very short and in between each song was a weird gap,” Clarke said.

All Night Boogie Band was the first act to take the stage at 1 p.m. They opened the set with their song “Taste These Blues” and played other original songs including “I Paid My Dues to the Winter Blues” and their new single titled “A Woman Like I.”

A 20-minute break between All Night Boogie Band and the next act, Annie DiRusso, allowed students to get food or participate in the other events of the day.

SpringFest attendees could purchase food from vendors including Sisters of Anarchy Ice Cream, Green Mountain Potstickers and Church Street Cheese Steaks. They could also participate in activities like cornhole, henna, tie-dye, an inflatable obstacle course or an inflatable game of Hungry Hungry Hippos.

“I really did love the bouncy castle at the beginning just to get the energy up and have fun with it before moving into the concert,” first-year Shelby Raymond said.

DiRusso took the stage at 1:50 p.m. Her set featured original songs including “Dead Dogs,” “Don’t Swerve” and her hit track “Coming Soon.” DiRusso interspersed her playing with stories her first time getting high at UVM while visiting a friend.

The concert committee selects the lineup based on the affordability of an artist and which artists have the broadest appeal, said Joe Scungio, UPB Concert Committee member. The UVM Program Board Concert Committee sent out a poll to the UVM community this fall to ask for artist suggestions.

For this year’s concert, the committee prioritized different types of artists, Scungio said. The three performers of the night represented three genres: blues, indie and hip-hop.

“The whole diversity of sounds is so good,” said Brendan Casey, All Night Boogie Band guitarist. “I feel like in Burlington you get hammered over the head with the whole jam band thing, but at this SpringFest they really locked down getting acts that have a great diversity in genres of music.”