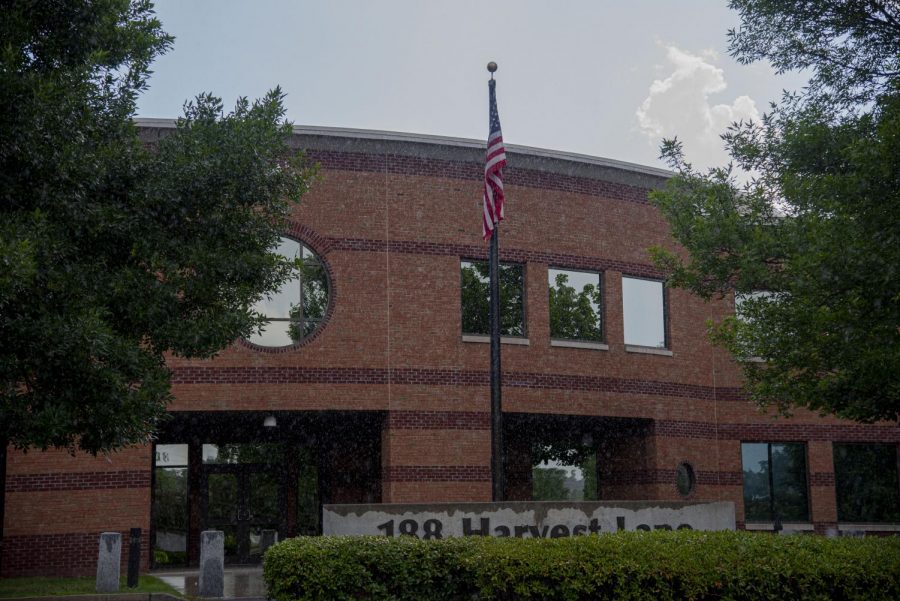 Rain pours down on Immigration and Customs Enforcement’s Law Enforcement Support Center in Williston, Vermont July 8. This building is the “nerve center of ICE” according to the Burlington Free Press.

Roughly 671 UVM students may be subject to deportation if UVM is forced to switch to an entirely online semester for Fall 2020 due to a new policy from the Trump administration.

The most recent immigration policy announced by the U.S. Student and Exchange Visitor Program on July 6 states that any college students with F-1 or M-1 status visas who are enrolled in an entirely online program will be deported back to their home country.

The University could be forced to switch to entirely online courses at any point in the semester, and students with F-1 visas would have to be deported, even if they are in the middle of their semester, according to Kim Howard, Director of UVM’s Office of International Education.

“It’s very unsettling to live with knowing for a full semester that at any point of time you have to leave within 10 days,” Jenny Pendersen, a junior international student from Drøbak, Norway, said.

This policy is not new. Students with F-1 status visas have always been required to take a full course load of in-person classes with a maximum of one three credit online courses as a part of that load.

Though this policy was adjusted by ICE at the beginning of the pandemic because students did not have control over all of their courses becoming online courses.

ICE plans to reverse the temporary COVID-19 policy, effectively taking away these rules that protect students whose schools switch to online for the fall 2020 semester, according to ICE’s directive.

Pendersen says she is very frustrated and anxious about the situation she is in. She has already signed her lease for the upcoming year and if UVM switches to online-only she says she will be forced to leave her home.

“I’ve lived here for two years now and I just really enjoy it and I don’t want to be forced to go back, it’s just a very unsettling feeling honestly,” she said.

Harvard and MIT, with 7500 international students between the both of them, have entered a lawsuit against the Trump administration over ICE’s online ban, Howard said.

“They’re kind of saying ‘hey you all told us that these exemptions would be in place for the duration of the emergency…And so we with our 7500 international students between the two institutions were making plans on that basis,’” Howard said.

According to Howard, the correct process for making immigration rules starts with a draft, and then gives the public an opportunity to comment before they finalize the rules, but “those pieces have not occurred yet,” she said.

Other schools have started to join the lawsuit against the Trump administration including the University of California, Northeastern University,  Syracuse University and Dartmouth College.

The University of Vermont has not made any decisions that indicate it will be joining the lawsuit, but they continue to express solidarity and provide resources.

Garimella recognizes that international students enrich communities and contribute daily to breathtaking discoveries that have popped up the American industry.

“Indeed, they have been at the heart of creating a huge part of today’s economy in this the most affluent country in the world,” Garimella stated.

Joining the lawsuit doesn’t necessarily have any guarantees of success, Chris Harrell, founder of the Union of Students, said.

“It’s more important for them to get out that guarantee that our international students will at least be able to be registered as hybrid students and keep their visa status versus,” Harrell said.

Some schools have been offering one on one classes for international students so that they at least have one in-person class to fulfill the eligibility criteria, Pendersen said.

“That’s definitely something I would really like to see if they decide to go online…a one-credit course, that’s all they need technically,” Pendersen said.

UVM’s Union of Students has asked students to call and email UVM to, “demand that they ensure the existence of some in-person program or program registered as in-person learning, to allow for these students to keep their Visas,” according to Instagram.

The post provided students with contact info for UVM’s Provost, President, the University Communications and Vice Provost. It also shared a script and tips for the calls and emails.

“A 3-credit in-person class does meet the regulatory requirement, Howard said. “So would a hybrid course. UVM will do everything we can to ensure that students meet requirements for continued residency/compliance with F-1 regulations so that they can remain in the U.S.”

“Violation of the rules causes the termination of your SEVIS (immigration) record, which is very serious,” the site states. “It means you immediately begin to accrue days of unlawful presence in the USA and would need to cease all work on campus immediately.”

The University of Vermont takes abiding by the rules of  SEVP very seriously, according to Howard.

“If the University of Vermont is found to not be in compliance with the F-1 program, the government can say, ‘well you know what we’re just not going to let you run that program anymore,’” Howard said.

Without government authorization SEVP would remove the University’s authority to issue documents such as the I-20 which is a required form for these students to apply for their visas and UVM would no longer be able to have any international students, according to Howard.

There is no place on campus that UVM can bar ICE agents from entering in order to protect students with F-1 status if they are at risk for deportation because UVM has been given the authority by the U.S. government to issue I-20 forms.

“That is simply not an option [for us] just to say ‘hey you can’t come here,’ that’s literally a condition of us issuing those documents,” Howard said.

UVM is required to do what ICE requests and answer the questions that ICE asks, she said.

Though Howard does not believe that this is the final draft of this new rule.

“When SEVP issued the guidance [in March] it changed several times,” she said.

Guidance such as this new immigration rule takes a while to address all of the different situations that 3,500 different colleges and universities present, Howard explained.

Because of that, it is altered as different perspectives are communicated.

Currently, UVM’s Office of International Education is working with UVM’s deans, associate deans, program directors and all of the academic department chairs to ensure that UVM international students who are in the U.S have the support they need, according to Howard.

For students who would have to be joining class from different time zones, Howard said she is trying to convince professors to deliver courses asynchronously, meaning they would not give the information all at one time.

“It certainly won’t be possible in all cases, but where it is possible that is the hope to make it just a little bit easier because we’ll end up having students in all kinds of time zones everywhere, domestic and international,” she said.

On top of this, there are worries about how international students will safely travel back to the U.S if they choose to return for the fall semester or back to their home country if they are deported from the U.S.

“It’s important to acknowledge that there are students who went home to China, Brazil, Iran, the UK, Ireland or the 26 nations that make up the Schengen area of Europe,” Howard said.

All of those students are currently prohibited from entering the United States, unless they go to some third country that is accepting them, and they’re there for 14 days, and can demonstrate that then they can enter the U.S.

Some students may not be able to get home because of COVID-19 if they are deported from the U.S.

“There are some countries where literally their airspace is closed right now, and that could occur at some future time too,” Howard said.

If these students were deported to countries with closed borders Howard said UVM would have the student call their consulate or embassy here in the U.S and say “Please help me.”

“I just felt so frustrated because it feels like you’re doing everything they want you to do,” Pendersen said. “You pay to get your visa, you pay full tuition and you give them diversity, and in return, you’re kind of being used like a piece of a puzzle.”