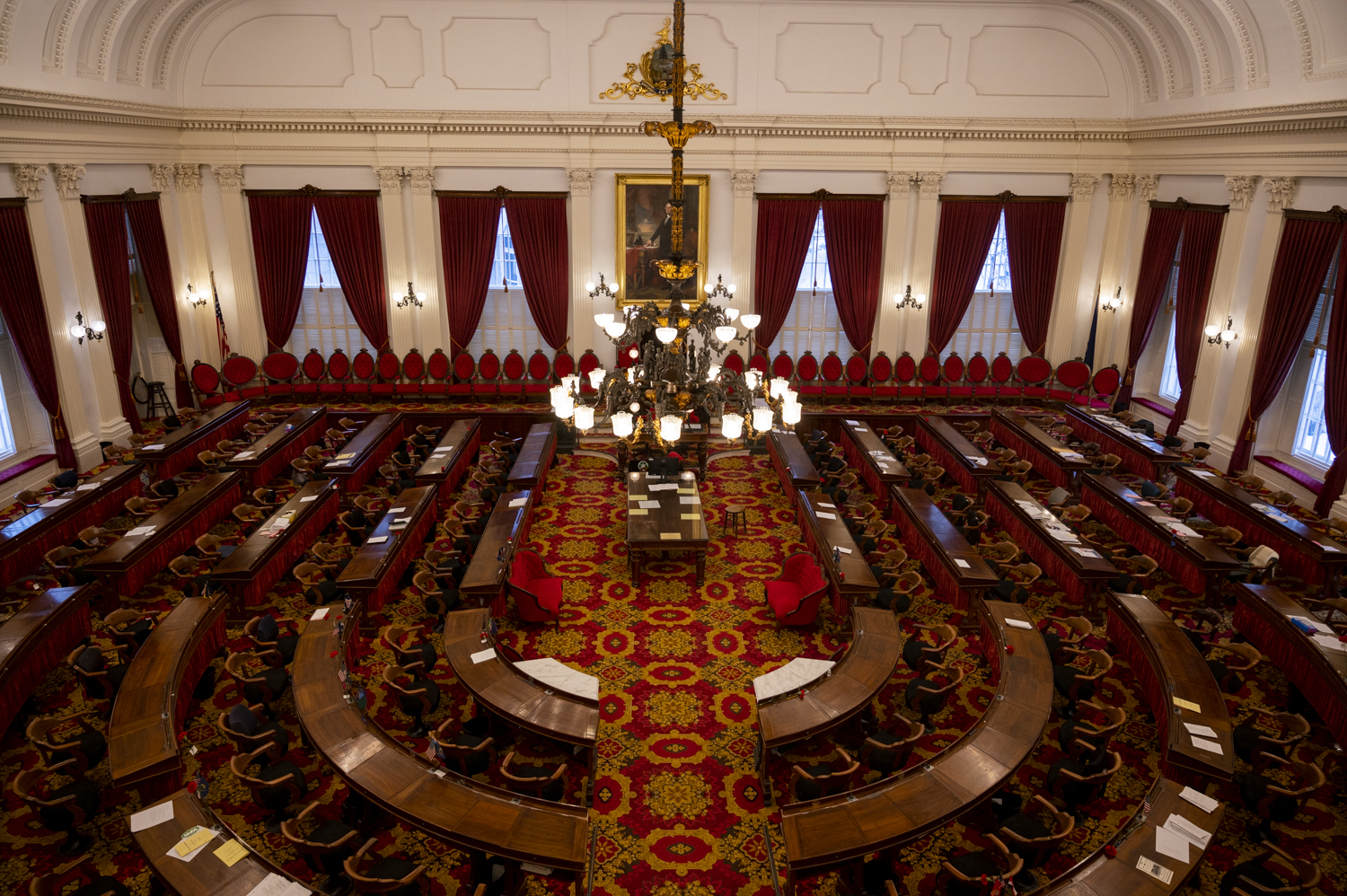 Felisha Leffler wore a pin  that said “Young People Make a Better Vermont,” a sentiment she carries with her every day as a 24-year-old Vermont House Representative.

Leffler grew up in Enosburg, Vermont, and now represents her town in the Franklin-7 district.

Leffler knew she wanted to go into politics from a young age. When she was 10 years old, Leffler accompanied her mom as a volunteer for the homecoming and deployment of military personnel in Vermont.

Leffler remembers Former Vermont Governor Jim Douglas  waited long hours with her and the other families at the airport.

“I would pester the life out of him…I’d bring a notebook and ask him ‘how do roads work, how do schools work?’” Leffler said.

She said Douglas taught her the importance of starting local when thinking about politics.

After graduating high school at 16, Leffler decided to attend Sweet Briar College in Virginia. While in college, she suffered a traumatic brain injury that forced her to return to Vermont, where she spent her recovery attending local political events.

“During that time I was reconnected with my community,” Leffler said. “It brought me back to the fact that politics isn’t just an overhead that I can be a part of, but that it was integral in my community.”

After graduating college, Leffler decided she wanted to focus her energy on helping her Vermont community by assisting in local campaign work; however, she soon saw an opportunity to run herself.

In 2018, Leffler ran for a seat in the legislature as a Republican Representative and won against Cindy Weed, taking office in January 2019.

Leffler sees Vermont as a place that gives young people the opportunity to run for political office due to the lack of hierarchy.

She said in other states there is an order of priority for candidates based on experience, but in Vermont, the candidates are those willing to expend energy and who have free time.

“I’m only able to run and serve because I have excellent support, but if I had already started my family, or couldn’t work another job, I couldn’t afford to be here,” Leffler said.

Leffler said the legislative session runs for five months out of the year, compensating only for the time legislators are in session, which is usually around $20,000 per year. The salary and time constraint of the session make it difficult for Vermont citizens to run for office because they may need a time-flexible job to supplement a salary for the rest of the year.

“A lot of people who are independently wealthy or have already retired and have had wonderful careers can run, which creates an average age of 64 years old, which is 40 years older than I am,” Leffler said.

Leffler said the demographic of the legislature sometimes creates differences in perspective between the older and younger generations.

Though they have good intentions, the older male demographic of the legislature has an impact on her daily work life, Leffler said.

Leffler was running a meeting in the legislative lounge when she was interrupted by a Senate staffer informing her she was in the wrong place because only legislators can use that space.

Leffler said it takes more work for her to feel respected in her position around an older male demographic.

“I find I will apologize for asking questions in committee,” Leffler said.

Before Leffler ran, she asked her friends and former co-workers from her time in Virginia if she should run for house representative. Her close friend Connor Marley, whom she met working on a campaign in Virginia, said many of them felt she shouldn’t run because of her age.

“But she did it anyway and won,” Marley said. “If I could capture her passion, I’d bottle it and sell it.”

For Leffler, this passion has grown inside the Statehouse. She has learned a lot and has gained support from other seasoned law makers, such as Rep. Butch Shaw.

“She doesn’t necessarily take no for an answer,” Shaw said. “She’s very persistent, and that’s good. The young legislators bring new ideas with them.”

Sophomore Katie Wynn, a political science major,  said she had never heard of such a young woman running.

“I know how to discuss politics, write about it and think critically about it, but that’s a whole different thing than rolling up your sleeves and making laws that will affect real people’s lives,” Wynn said. “I think that might be keeping young people out of the substantive tangible act of politics.”

Leffler remains passionate for the Vermont community she represents and uses her position to advocate for the perspective of young people inside the Statehouse.

This is part two of a three-part feature series on young female legislators in Vermont.