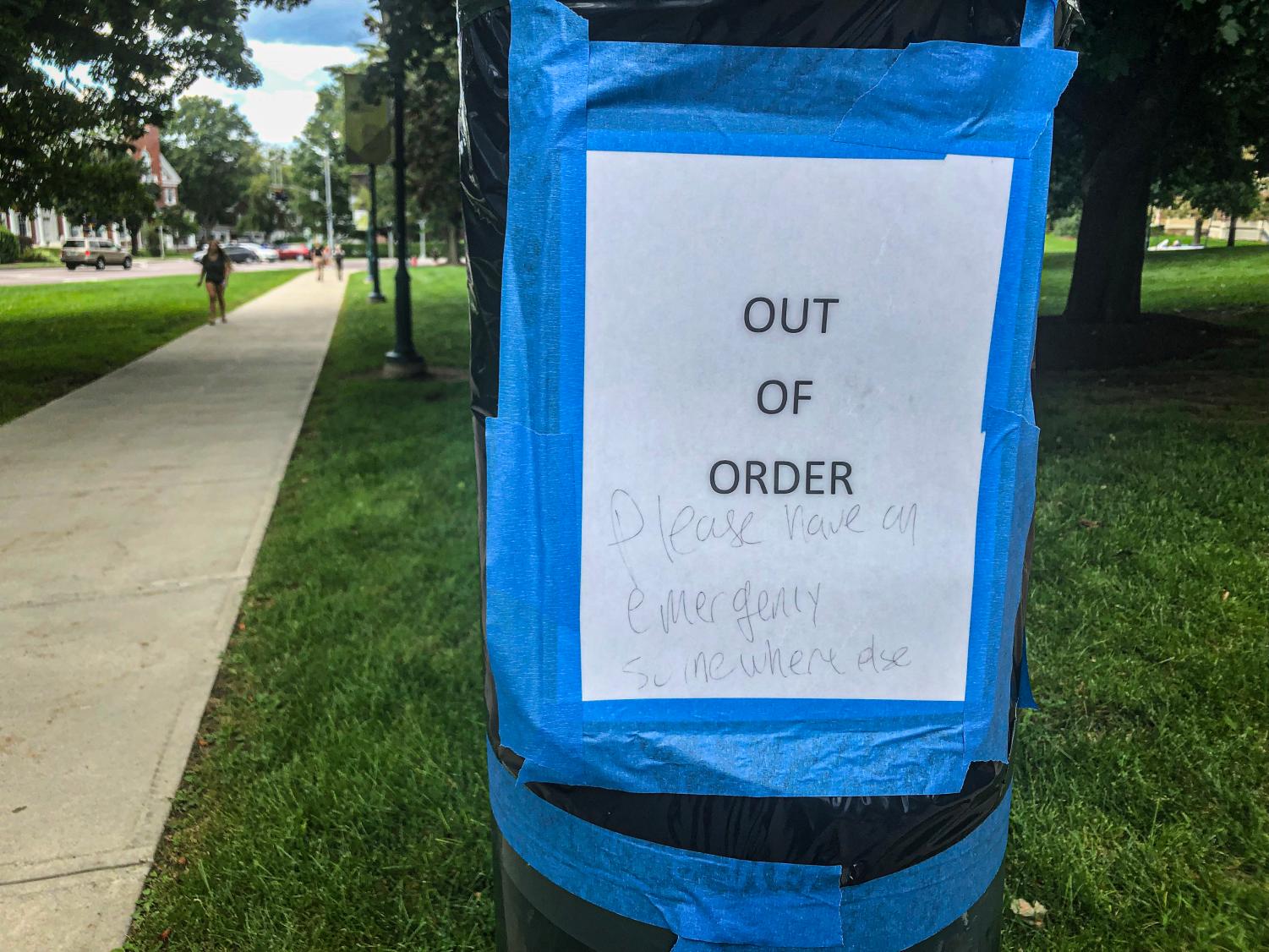 An out of order sign on a Blue Light post has a messages written on it stating “Please have an emergency somewhere else.”

An out of order sign on a Blue Light post has a messages written on it stating “Please have an emergency somewhere else.”

UVM’s Blue Light units are becoming more difficult to repair, as replacement parts are no longer being manufactured and need to be special ordered, sparking concern among members of SGA.

The Blue Light Emergency System is an alarm system to protect against crime, according to the AFA website. This traditional system is becoming more challenging to update because parts needed to repair them are being discontinued, said Erica Caloiero, vice provost of student affairs, at a Sept. 14 SGA meeting.

LiveSafe is a mobile campus safety communication platform that gives users the ability to communicate information about safety concerns before they turn into emergencies, according to the UVM Police Services LiveSafe webpage. The app may be the best campus safety resource moving forward, Caloiero said.

Some SGA members expressed they feel that the physical presence of the blue lights fosters a climate in which potential perpetrators are less likely to engage in misconduct at all.

“I feel it is incredibly important [that] the blue lights are repaired,” said sophomore and SGA Senator Abigail Berkowitz. “The blue lights themselves act as a deterrent [to] incidents.”

Junior Maeve Forbes, chair of the Diversity, Equity and Inclusion committee, said any possibility of phasing out the system in the future would be both an accessibility and classist issue, as some students do not have the proper technology to accommodate an app.

However, most of the instances in which the Blue Light units are used are either pranks or errors and not for actual emergencies, Caloiero said.

Although an app is not visible on the campus landscape as the Blue Light units are, Caloiero said LiveSafe is more effective in practice.

However, Caloiero did not cite the source of this assertion.

The Blue Light system was used over 100 times from January-September of 2021, according to the UVM Police Services’ crime log.

Although the concept of eventual discontinuation of the blue light system is controversial now, SGA supported the idea of removing this campus safety feature two years ago, according to a 2019 Cynic article.

“I know blue lights certainly have value,” said former SGA President Jillian Scannel in the 2019 article. “I am by no means advocating that we remove all blue lights on campus, but I think we should remove some and understand more intentionally where they are.”

Back in May, thousands of UVM students marched in protest of the University’s handling of sexual assault and to bring awareness to the need for systemic change, according to a May 4 Cynic article.