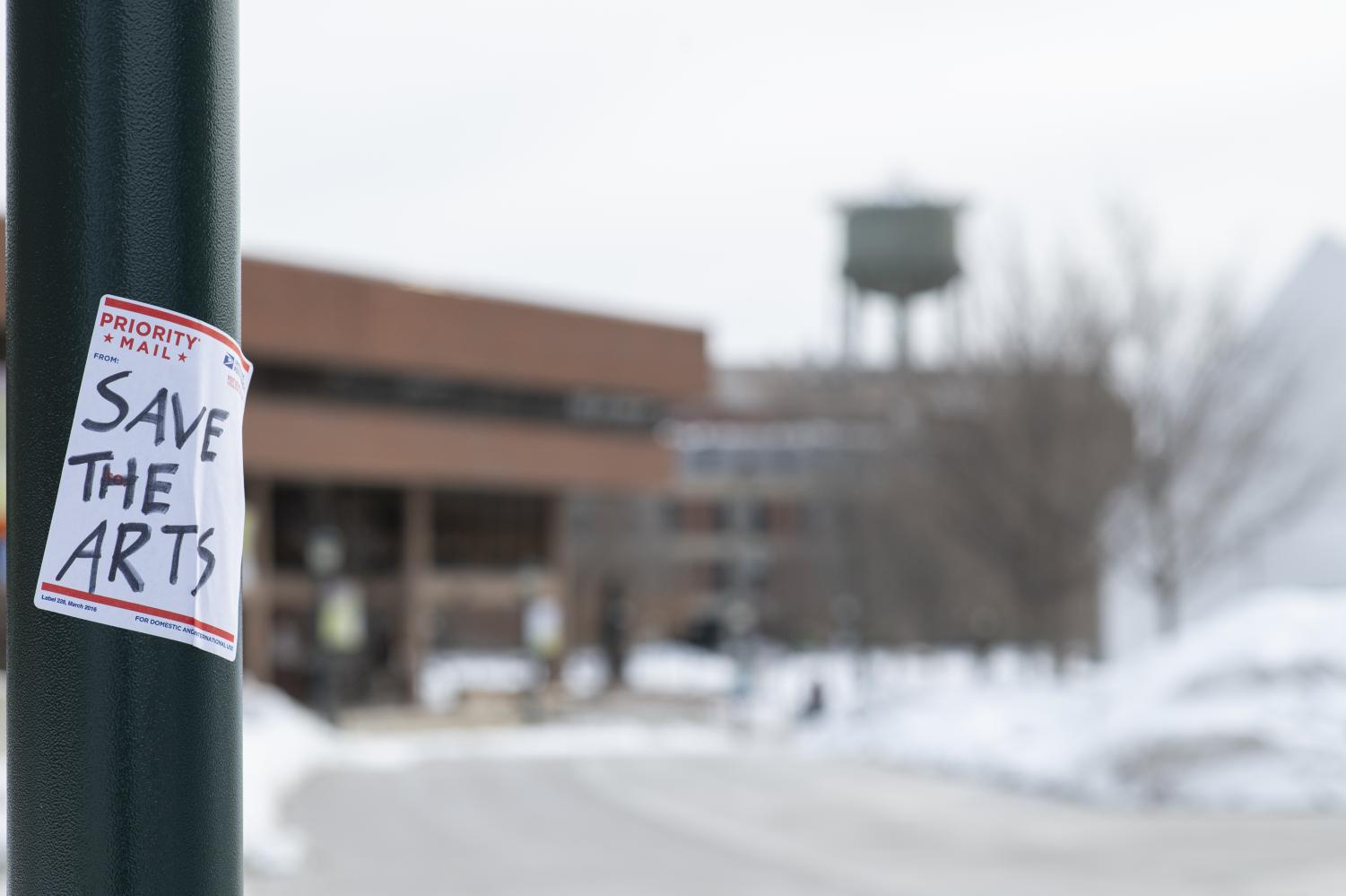 A USPS sticker with “Save the Arts” is stuck to a UVM streetlamp next to Rally cat Feb. 9. Similar stickers with different messages pertaining to the recent CAS budget cuts have appeared on other streetlamps around campus. (Kate Vanni)

A USPS sticker with “Save the Arts” is stuck to a UVM streetlamp next to Rally cat Feb. 9. Similar stickers with different messages pertaining to the recent CAS budget cuts have appeared on other streetlamps around campus.

‘I’m going to miss this:’ Three cut lecturers reflect on time at UVM

As UVM undertakes a dramatic reorganization of its academic structure, slashing programs amid budgetary shortfalls, Charles Briggs of the history department, Jamie Williamson of the English department and Stephen Wright of the geology department are leaving the school they have dedicated a combined 71 years to.

All with senior lecturer status and a multitude of accomplishments over their tenure, Briggs, Williamson and Wright received news in December that UVM had not renewed their contracts. The three professors reflected on their time at the school with the Cynic, spoke about their response to the news and what’s to come.

With an office packed with evidence of his expertise, eager students and walls filled with his publications and books, Charles Briggs will leave UVM based on what he has been told was “a roll of the dice decision.”

Briggs’s talent has not gone unnoticed by other institutions and he has already been offered a visiting scholar position at Dartmouth University.

“I have a very strong international reputation as a scholar of the intellectual and political culture of late medieval and early Renaissance Europe,” Briggs said. “I’m just going to happily publish away and continue to be a scholar.”

Teaching has always been intimately connected with Briggs’s research and publishing. Throughout his years at UVM, he has brought his knowledge and experience into context for his students.

Briggs tells his students the importance of learning history is not only to understand the past, but to know how to move forward in the present.

“It becomes not just a wealth of knowledge but also a way of thinking, a way of approaching the world,” Briggs said. “It helps us figure out how to think and to act in the present.”

Briggs believes that understanding history is vital for stripping away chaos and confusion in politics and society, and said the education he tries to offer is one that helps his students be able to think critically.

Briggs designed and taught courses on many levels during his time at UVM, including graduate seminars and honors college courses. He has also authored and edited numerous books.

“I’m probably most proud of designing and teaching the senior seminar, a course that I developed called ‘Books and Readers in Europe,’” he said.

UVM is making what Briggs believes to be a fruitless decision, given his low salary in comparison to his many contributions to the University.

“It’s a surprise to me given how little I made, which is truly a joke, that somehow getting rid of me is actually saving them money,” Briggs said. “It’s not saving money.”

Briggs said he has gone beyond his job description throughout his time at UVM, giving the institution much more than he believes they compensate him for with his $46,642 base pay salary.

Briggs said he received the news that his contract was not being renewed on the Monday before Christmas last year while still grading finals from the end of fall semester.

Briggs said that although there are people in the community advocating for him and his job, he does not expect administration to reconsider their decision.

“It’s becoming increasingly clear that the board of trustees and the president really want to turn this school into a kind of business cooperation,” Briggs said. “The way administrations tend to function is, they make decisions, and they don’t go back on them because they think it makes them look weak.”

Briggs had been under the impression that, after being named the UVM President’s Distinguished Senior Lecturer, his position at UVM should have been set forever.

“I thought, I’m too much of a success for them to cut my job,” Briggs said. “To then have my job cut, and have the dean say it was a roll of the dice, I’m like, oh I see, we’re doing like Russian Roulette decision making now.”

Stephen Wright, Senior Lecturer in UVM’s Department of Geology and lifetime explorer of the land and its creation, is leaving UVM after 28 years.

Of Wright’s memories at UVM, he said he has most cherished his opportunities to bring students into the outdoors.

Now, Wright is being forced out along with the department he has worked in for decades.

“I would love to keep on teaching for a few more years, but I’ve got other things to do. I’m just sort of resigned to it,” Wright said. “That said, sometimes I’ll come away from a really good class and think, I’m going to miss this… the interactions with the students, the interactions with my colleagues.”

Since childhood, Wright has found great passion and interest in geology. Although he describes himself as shy, he lights up when speaking about his research and time spent sharing that passion with his students.

Wright’s interest in geology and science was sparked by field trips and passionate earth science teachers beginning as early as sixth grade, and continued through high school and eventually into his college education as a geology major at Penn State University.

He said he has been able to tie his adventurous nature into his classes and help his students find a similar connection to the local geology through his labs.

“I tell students, they’re probably not going to remember much we talk about in big classes, but they’ll remember the field trips,” Wright said. “It’s a sensory experience and you’re using your head, and you’re aware of everything.”

Wright has brought his students on three week trips to Colorado to explore and camp, spent summers with undergraduates mapping different areas in Vermont and helped his students with many projects in the field.

He remembers these experiences as some of the most valuable teaching moments in his career.

The research and work Wright has done mainly focuses on trying to understand the glacial geology of Vermont and the surrounding areas in New England. He is fascinated by the receding ice across the state, and the imprints of glacial lakes on the state’s landscape.

Wright is more concerned about the future of the geology department than himself, and said it is critical that geology continue at the University, both because it has been such a long term part of UVM’s core curriculum and because of the scientific contributions it has made.

“We’ve seen the publication of a new state geologic map, and [the creation of] a fundamental understanding of how the mountains were made and the timing at which the mountain building process has occurred,” Wright said.

Wright  is afraid of what separating the geology department faculty and removing the program will mean for the school, and said that it will be difficult to continue to make scientific progress without the department as a whole.

“It’s emotionally upsetting,” Wright said. “I’m afraid that they’re going to be upset enough that they’re just going to leave, and they are such fine assets to the university and to the general Vermont community. I would hate to see that happen.”

Wright has typically taught two lab classes each semester, and says that it has been a challenge as class sizes have grown to maintain an intimate hands on experience for the students.

Wright said he is not entirely surprised UVM did not renew his contract, given the financial struggles the University and community are going through.

Looking ahead, Wright anticipates continuing his work as a geologist and as an educator, as well as an avid explorer of the landscape.

“I can continue doing a lot of the research that I’ve been doing, because a lot of it’s been supported by the Vermont Geological Survey,” Wright said. “I should be able to continue working with undergraduates for the next couple years during the summers, soI hope to continue doing that.”

Despite the news that Williamson’s contract was not renewed, he is determined to push back against the University.

“The situation is a bit galling,” Williamson said. “After 31 years, it’s literally the eleventh hour that I’m not reappointed.”

Williamson specializes in Science fiction, Arthurian tales and Native American literature has taught at UVM since 1990.

The situation is a bit galling. After 31 years, it’s literally the eleventh hour that I’m not reappointed.”

In reflecting on his time as an English professor, Williamson said he has always had passion for the subject, beginning as a small child reading and rereading picture books and developing a love for the fantastical works of J.R.R. Tolkien and C.S. Lewis as he got older.

Williamson graduated with an English degree at Connecticut College in 1981. He felt courses on fantasy and science fiction were missing from his education, and so he went on to teach those genres at UVM.

“After I graduated, going into academia wasn’t a goal for me,” Williamson said in a Feb. 16 interview. “It started when I taught at Burlington College, where I discovered that putting together courses on literature is just natural for me because I’m so into this.”

Williamson was the first to propose teaching Native American literature at UVM, and worked hard to get an adequate background on the subject. He began offering the course in 1992.

“It is valuable being able to teach areas of literature that I’m interested in, which also connect to historical socio-political topics,” Williamson said. “It’s always been a great reward at the end of the semester to feel like students have really gotten something out of it. It is wonderful.”

Williamson spent nearly 20 years on his book published in 2015, “The Evolution of Fantasy,” which went on to win the Mythopoeic Society’s Best Scholarly Work in Myth and Fantasy in 2016 and is now used in courses by many teachers around the globe.

“In 1996 I was scheduled to do a summer class that nobody signed up for. I was in debt with a young child at that point,” Williamson said. “So I sat down and I wrote a sketched draft off the top of my head.”

Williamson hopes to continue teaching at UVM for a few more years, and said he is challenging the school’s attempt to force him into early retirement.

“If not, I need to figure out how I can live really really cheaply so I can put as much energy as possible into writing and music,” Williamson said. “I was planning on retiring in three or four years anyway.”

Williamson is an avid guitarist and singer/songwriter, and has been a member of multiple bands throughout his life. He plans to record more music and continue playing in the future.

“My hobbies are serious hobbies,” Williamson said. “Things that I’m obsessed with.”

Williamson said that UVM appears to be becoming a tech based school, and that moving away from the liberal arts focus could backfire.

“Part of the reason you know that students choose UVM to do STEM is precisely because of the liberal arts here,” Williamson said. “If you end up whittling back the liberal arts, there’s a really good chance that lots of students will not see a reason to come to UVM as opposed to other schools.”