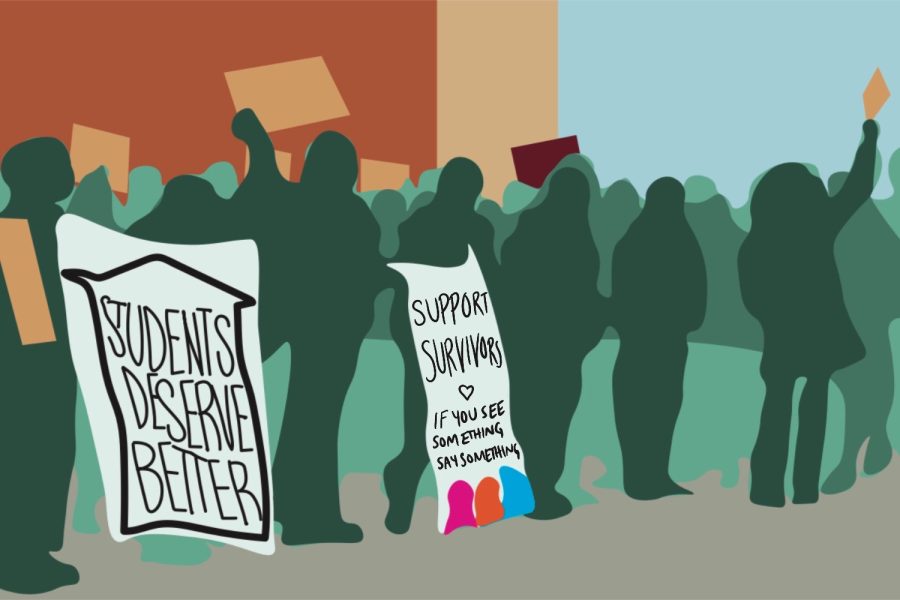 We shouldn’t be surprised by the UVM administration’s poor response to sexual assault.

“UVM does not tolerate sexual misconduct and takes such accusations seriously,” stated the now-deleted Feb. 17 post by UVM’s Instagram. “Anonymous accusations on social media are not helpful to victims or to anyone impacted by sexual violence.”

The University’s gross statement blames survivors and encourages them to stay silent.

Ware chose to proceed with an informal investigation, which she was originally told could result in game suspension of the basketball player, according to an Oct. 13 2020 Cynic article.

Later, Krista Balogh, associate athletic director for External Relations & Communications told Ware’s mother the informal investigation would not permit game suspensions, as it wouldn’t be fair to teammates or to the community, according to the article.

Not only did UVM mishandle Ware’s case, the University valued money over the health and well-being of their students.

The Instagram post appears to jab at survivors who do not report their sexual assaults through UVM’s Title IX office.

It is disgusting to suggest that there is no merit to these survivors’ stories.

Coming forward with a story of sexual assault takes strength, bravery and courage.

UVM contributes to the victim-blaming culture deeply rooted in colleges across the country.

UVM is still tone-deaf when it comes to the needs of survivors.

Their post started a flood of other survivors coming forward with their stories, many of which criticized UVM’s Title IX process and handling of their cases.

@shareyourstoryuvm where survivors can anonymously submit their stories regarding sexual violence. The account was created to empower survivors.

When nothing changed after survivors came forward, thousands of students participated in a walk out, begging for UVM to address their mishandling of sexual violence, according to a May 4 2021 Cynic article.

After the recent Instagram post, hundreds of students protested on an Admitted Student Visit Day, according to a Feb. 21 Cynic article.

Prelock apologized for the Instagram post along with UVM’s general disregard for survivors, according to a Feb. 23 email to students.

“I will work with students to find a space to share your experiences and to recognize differences in perspectives, and I will ensure that any communication regarding students and sexual violence will undergo thorough review and will require my final approval,” the email stated.

Her words are encouraging, but we’ve seen this before.

UVM cannot claim to hear survivors while only promoting discussion of sexual assault claims through the Title IX office.

Administration needs to understand the deep pain their actions and shaming has caused survivors and needs to stop valuing money over their students’ wellbeing.