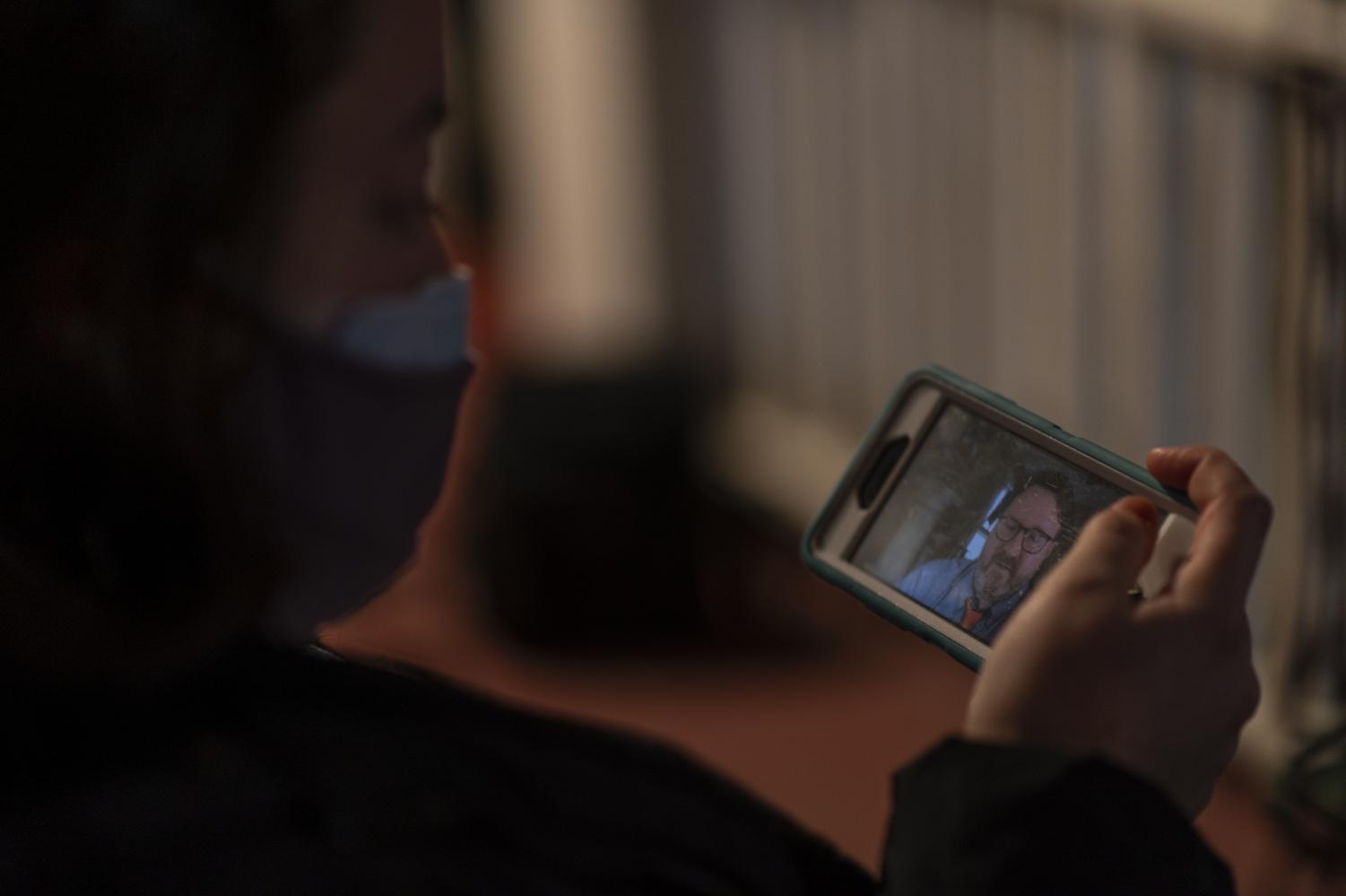 As UVM professor Aaron Kindsvatter continues to post videos to his YouTube and make appearances on conservative radio and tv shows, his message — against what he perceives as anti-whiteness — has gone unfettered by UVM officials.

Kindsvatter has a long-standing history of defying UVM policies and norms he’s framed as “critical social justice,” including vehement opposition to the introduction of a “Bias Response Team.”

Current students and alumni say Kindsvatter has a questionable approach to the classroom that’s made some of them feel hurt and deeply uncomfortable.

An online petition calling for Kindsvatter’s resignation or dismissal has received more than 3,400 signatures, with student groups like Student Government Association openly calling on University administrators to fire the professor.

Despite mounting tensions, University officials have remained relatively quiet as to what action, if any, can be taken against Kindsvatter.

A history of opposition

Five years before Kindsvatter took to YouTube to bash what he called a culture of discrimination against “whiteness” at UVM, he criticized a UVM program designed to address incidents of bias in the UVM community.

Created in 2014, the Bias Response Team is meant to address select incidents of bias that happen within the UVM community, according to a Sept. 14, 2016 Seven Days article.

A bias incident is when speech or expressive conduct is motivated by one of several aspects of a person’s identity, which includes race, religion, sexual orientation and gender, according to the UVM Department of Student Affairs website.

In 2016, Kindsvatter sent an email campus-wide advocating against the new program and told Seven Days that the team would only “chill free speech,” according to the Seven Days article.

“The language of the University of Vermont Bias Response Team really opens the doors for censorship of anyone of any ideological perspective who says something in class that could potentially offend somebody else,” Kinsdvatter told Seven Days.

As a result of what he views as vague language, Kindsvatter said he has seen a “chilling effect” on students.

“I think people are afraid to raise issues that do not fall within the perceived parameters of what’s okay to say at the University of Vermont,” he told the Cynic in October 2016.

By looking at different ideas from all different viewpoints, Kindsvatter believes the good, tolerant and progressive ideas will come through in a non-violent manner, a realization that came to him after the mass shooting at Orlando’s Pulse nightclub in June 2016, he said.

The morning after the shooting, Kindsvatter said he read about a bias response team at another university investigating a professor for playing devil’s advocate on a gender identity issue.

“I was struck dumb by this because this is a time where we really need to be interrogating all the ideas out there about gender identity in the University,” Kindsvatter said.

At the time, now-former Vice Provost for Student Affairs Annie Stevens told the Cynic the Bias Response Team does not police speech in classrooms, nor is the team’s intent to dictate content or stifle free speech.

Since its creation, the Bias Response Team has dealt with a number of racially motivated incidents that have happened on campus.

One of them occurred in February 2016, eight months before Kindsvatter came out against the UVM policy, when the Bias Response Team investigated an incident involving an email sent out to a select number of Jewish students that stated the infamous Nazi crematorium at Auschwitz was a “hoax,” according to a Feb. 17, 2016, Cynic article.

Outside of his fight with the administration’s approach to bias incidents, Kindsvatter’s classroom methods have been at times traumatizing according to several of his former and current students.

“This isn’t a new issue,” Clarrissa Stevens ‘20 said. “And it’s worsening, the things he’s publishing and putting online are becoming more and more violent and aggressive.”

Stevens was a former student and advisee of Kindsvatter while she studied in the graduate department of CESS from 2017-2020.

Her experiences with Kindsvatter were filled with trauma, racism and white supremacy, Stevens said.

“It was a terrible education experience, not sure if I could limit it to one word, but sadness, grief and anger,” Stevens said.

Stevens recounted multiple occasions when Kinsdvatter referred to women as the more emotional sex while men were the more logical sex.

Stevens attempted many times to have Kindsvatter’s actions addressed but she said they went unheard.

“I filed numerous complaints against him for these things, but we would all just sit in class and be flabbergasted and not allowed to leave because you have to take his course to finish the program,” Stevens said.

In an attempt to find the number of complaints filed against Kindsvatter, the Cynic reached out to CESS’s Dean’s office. The office stated they had no records like that on file and they had no knowledge of where they would be.

The Cynic also reached out to the Bias Response Team and the Affirmative Action and Equal Opportunity office and no one could confirm or deny any whether complaints filed against Kindsvatter exist.

Outside of the classroom, Stevens said her relationship with Kindsvatter as one of his advisees was also harmful.

Stevens met with Kinsdvatter for about a year and a half and attempted on numerous occasions to have “restorative conversations” with Kindsvatter in an attempt to make her advising relationship better, she said.

“I tried to express the ways in which he was harming me and other people, and each time he would just sit there in silence or say something else problematic,” Stevens said.

“I had probably 10 plus restorative meetings with him, refusing that meeting resulted in me not getting a new adviser, which was extremely harmful for my last semester of graduate school,” Stevens said.

For a CESS student to change their adviser, they must first meet with their current adviser to discuss the change according to appendix G in the UVM Counseling Program’s Student Handbook.

“The old and new advisers sign off approving the request and the change is then filed with the Counseling office and the Graduate College,” Thomas stated in March 29 email to the Cynic.

Current students said Kindsvatter’s actions in the classroom have them concerned as well.

One of the worst moments was when Kindsvatter showed a person performing acts of self-harm and Kindsvatter describing a rape situation in detail to the students, Einhorn said.

“He spoke about it extremely casually,” Einhorn said. “Several students had to leave the room.”

Schorr said she was one of the students who had to leave the room.

“I mean, I’m going to expose myself here, I had to get up and walk out of the room in tears one day and he didn’t check in with me, there was no follow-up from that,” she said.

Kindsvatter defended his actions by saying he was trying to illustrate how associative learning works by using a case example in which a person narrowly escaped an attack, according to a March 12 email to the Cynic.

Einhorn said she was worried about the implications of Kindsvatter holding these views and expressing them on a public platform.

“This is how hate groups happen,” Einhorn said after she watched the first video. “People who have these places of power who put out videos like this, using a lot of big words.”

Einhorn said there is no room for views like those of Kindsvatter when it comes to a profession like counseling.

Bronstein-Paritz said a professor who holds these views should not be allowed to teach a course on counseling due to the power and influence that educators hold.

“I imagine his views being indoctrinated consciously or subconsciously [within] students,” she said. “You know, it’s creating future professionals who might do a lot of harm to patients or students.”

Einhorn said she never noticed Kindsvatter speak about his whiteness or race in general.

“This video showed how he really feels about things,” Einhorn said. “I think he’s gonna see himself as some sort of savior for posting a video like this. Even if he gets repercussions. He’s going to be like, ‘well, I spoke up against these injustices against white people.’”

Kindsvatter has continued posting videos, detailing what he feels are the discriminatory policies and acts perpetrated by UVM leadership against white people.

Since his YouTube series has begun Kindsvatter has made an appearance on famed conservative radio host Glenn Beck’s YouTube show and controversial lawyer Alan Derhsowitz’s podcast “The Dershow” to discuss what’s going on at UVM.

Kindsvatter told Dershowitz that he hasn’t ruled out the possibility of his own termination.

“Whenever you speak out on an issue like this, the first thing that they begin to do is they start digging to see if you’ve ever said anything wrong,” he said. “While I can easily stand by the statements that I’ve made in my videos, that tends to focus attention on a person in a very negative way.”

In response to the widespread outcry, Provost Patty Prelock and CESS Dean Scott Thomas said in a joint statement that the strategy moving forward is to embrace progressive work towards equity.

“We will continue to lean into our [diversity, equity and inclusion] efforts, and in so doing, create further opportunities to strengthen our community,” the March 15 email stated. “This event has given us further clarity and resolve about the importance of our commitment to our Common Ground values and DEI work.”

In response to numerous attempts to schedule an interview with Thomas, he replied by stating he takes concerns from students seriously, but would not be able to talk more specifically about the concerns.

“We have mechanisms in place to receive and appropriately address concerns and to assess and investigate complaints and take action that is warranted,” Thomas stated in a March 22 email to the Cynic. “At the same time, we are obligated to protect the privacy of individual students and individual faculty members, and to hold any related information in strict confidence.”