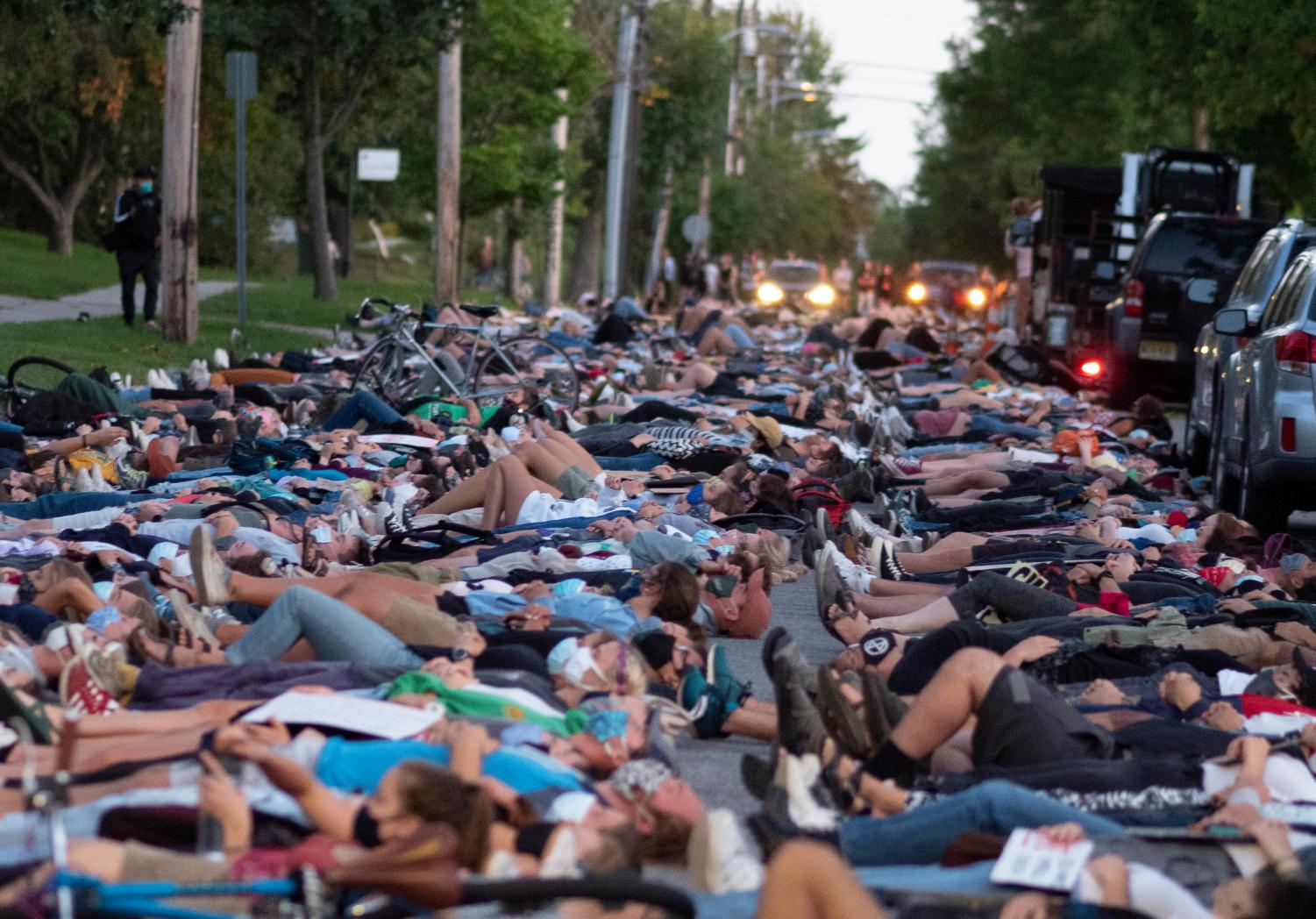 For 13 consecutive days, UVM students have blocked roads, marched down streets and disrupted downtown Burlington as part of a multi-day non-stop protest calling for the firing of three Burlington Police officers.

As the protests continue and stretch into the third week, UVM students have routinely joined Burlington community members, some as leaders and organizers, to express their frustrations with local officials, while city decision-makers have refused to budge.

“We are approaching two weeks of this bullshit. Two weeks,” said one protest leader Sept. 5 as he urged people dining on Church Street to join the crowd. “No demands have been met yet, but we’re getting some. We’re getting to the mayor, we’re getting to the BPD, but that should not stop you all from coming out here.”

In fact, Weinberger sent a letter to organizers of the protests Sept. 4 affirming demonstrator’s first amendment rights, but then threatening to issue noise violation tickets due to multiple noise complaints stemming from an encampment of protestors at Battery Park.

Protestors have continued to sleep in tents at Battery Park at night, occupying the space in front of the police department. And Friday night, hundreds laid down outside Weinberger’s house in a die-in calling on the Mayor to meet protesters’ demands for reform.

Harmony Edosomwan, UVM student and protest organizer, called on the mayor to take action, lambasting his recent statement which condoned the work of Burlington Police officers and urged the demonstrators to avoid safety violations.

Edosomwan and other organizers have acknowledged the overwhelming presence of UVM students involved in the multi-day protest, urging them to make the city a safe place for Black and brown students at UVM.

“Your responsibility is to bring more people here. Go into your dorm, let people know that this is happening every day until these cops are fired.” Edosomwan said from the steps of City Hall Sept. 1, overlooking hundreds of protesters.

Weinberger said in his Sept. 4 letter that he remains committed to dismantling systemic racism in Burlington, but that he was concerned for protestors’ safety.

“This concern is high on my mind in part because in recent weeks, other cities have seen clashes between protestors and counter-protestors that result in violence, and because, as we discussed, our community has a history of tragedies taking place within encampments that we must avoid repeating,” he wrote. “Further, protests taking over streets without any coordination with the City creates a significant risk of traffic injury. I remain concerned that something will soon go wrong and there will be avoidable injuries if City rules are not followed.”

But for the UVM students protesting downtown, the inherent risk of civil disobedience comes with their mission.

“This is my third day here and I have been trying to be as involved as possible because I know there’s an incredibly long history of racism in Vermont,” said Junior Zoe Kennedy, as she lined up to march Sept 1. “And it’s not the job of people of color to fix that, it’s people with privilege like I have.”

However, that same night, BPD also attempted to respond to reports of a fight with a gun but were blocked by protestors, according to the report. When officers attempted to get to the scene on foot one was allegedly hit by a rock.

Despite the tensions, protestors have continued to show up and don their orange safety vests to help direct disrupted traffic as angry passersby scream expletives and threats. Although much of the physical demonstrations have remained rooted downtown, students at the protest acknowledged that UVM has its own fair share of racial disparities.

“Another thing that’s happening on UVM’s campus is that UVM’s Black Lives Matter is calling on UVM to break all ties with Burlington Police Department,” Endosowman said during one night of protests. “Understand that UVM’s culture allows for black and brown people to be marginalized on campus but y’all need to change that.”

UVM had funded these patrols for this past summer but reversed its decision in June following student outcry.

Kennedy, a student at the protests multiple nights, said she also thinks UVM should be listening to different coalitions on the campus of people of color, like student groups’ demand to raise the Black Lives Matter flag permanently on campus.

“Even just small symbolism things like that are important to show inclusivity, especially on a campus that’s so white,” she said.

UVM raised the Black Lives Matter flag in mid-August but took it down several days later citing UVM’s Flag Policy and replacing it with the Davis Center flag.

“We are in support of advocating for the Black Lives Matter flag to be exempt from the Sponsored Special Events Flag operating procedures. Until we find a permanent place to raise the flag, we support displaying the flag at the Davis Center this week as students are welcomed back to campus,” the letter stated.

UVM President Suresh Garimella announced in an email to students Aug. 28 that the Black Lives Matter flag will be “permanently and prominently displayed” in the University’s Mosaic Center for students of color following an Oct. 4 commemoration.

The email did not indicate how the flag would be displayed in the Mosaic Center and did not respond to the Staff Council’s request that it be flown at the Davis Center during the first week of classes.

However, as classes continue on UVM’s campus, the unrest in downtown Burlington has promised to continue until change is made.