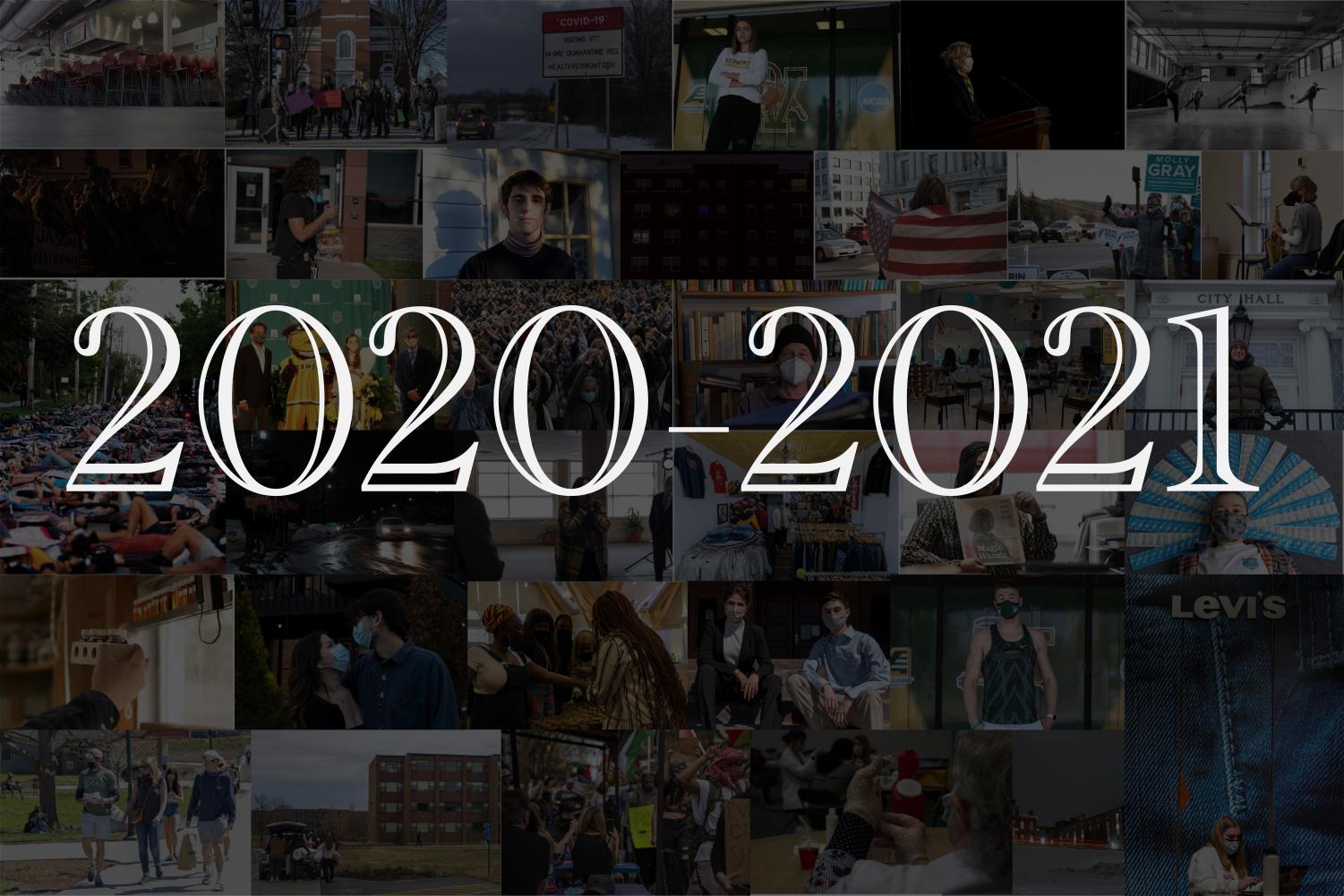 A school year in photos

In a school year of Black Lives Matter protests, sickness, financial hardship, the presidential election and survivors of sexual assault coming forward, Cynic journalists worked to provide truthful and thorough reporting of the events of 2020-2021.

The COVID-19 pandemic presented a challenge to the Cynic’s photojournalists as most events were virtual and in-person events featuring fully masked attendants who were socially distanced.

Masks do not make for great portraits.

Cynic photojournalists faced what would otherwise be a restriction of their rights to free speech as journalists, if it had not been for the excuse of the pandemic that many administrators used to limit coverage.

The Cynic persisted by the use of zoom lenses and other creative solutions to issues that would have blocked a visual record of such an important school year.

As UVM prepared to open up it’s campus to incoming students the Cynic reported on the changes to sports, student meal plans and the Burlington community’s reaction to the flow of college students returning to their home.

The Cynic also stopped the spread of misinformation about the meals students were receiving while in quarantine and covered the issues surrounding the raising of the Black Lives Matter flag on the Davis Center flag pole.

As the semester began Cynic reporters covered the effects COVID-19 protocols had on their peers including suspensions, changes to the school year calendar and how RAs were affected by the new rules they had to enforce.

Outside of COVID-19 coverage the Cynic followed the protests that were held in the month of September including a die-in organized by the Union of Students, the strike of the Davis Center employees and the many protests calling for the firing of three BPD cops.

After the Davis Center strike the Hispanic Heritage Month Flag was allowed to fly again, and soon after SGA assumed control of the Davis Center flagpole. Following the protests against BPD, Sergeant Jason Bellavance stepped down from his role.

On October 13 the Cynic reported on students demanding change from UVM athletics due to their claims of how the department mishandled a sexual assault investigation.

Later in the month UVM celebrated 100,000 COVID tests by producing a giant Q-tip to the student who was test number 100,000.

October was also the month that the White House COVID-19 Response Coordinator came to UVM to praise the school’s handling of COVID-19 but also caution against potential outbreaks.

Despite the confidence of UVM and Burlington police that students wouldn’t violate COVID rules for Halloween, in November the Cynic reported on the first uptick in positive COVID-19 test results. UVM called for students who were tested on Nov. 2 and Nov. 3 to retest following Halloween weekend.

On Nov. 9 the Cynic also gave its readers an inside look of the UVM quarantine buildings as COVID-19 cases continued to rise.

During peak election season the Cynic reported on Republican Governor Phil Scott’s announcement that he voted for Biden, and a week later the Cynic covered the historic win of President Biden on Nov. 10.

On December 3 the Cynic published a story detailing UVM’s plans to cut nearly 30 College of Arts and Sciences degree programs.

The Cynic went on to write seven separate stories about these cuts and their effects on the UVM community.

Due to the new spring semester schedule, January 2021 was part of the longest winter break UVM students have ever seen as the semester did not begin until Feb. 1.

When the semester started up and students returned for another semester of online and socially distanced learning, SGA challenged the CAS cuts announced by the administration. Though on Feb. 8 the board of trustees announced more cuts across colleges may come.

As COVID-19 cases at UVM grew to new heights UVM reported on the announcement of twice-weekly testing and harsher penalties for students who break the Green and Gold Promise.

When one of the Cynic’s reporters tested positive for COVID-19 the Cynic was able to provide it’s readers with an inside look at the experience a student goes through when they live in the COVID-19 quarantine and isolation buildings.

During the first week of twice-weekly testing the Cynic covered the extremely long lines of students waiting outside the testing center, one student waited 52 minutes to get their mandatory test.

As cases continued to rise the Cynic reported on the detection of the UK variant at UVM.

Outside of COVID-19 coverage the Cynic reported on student demands for a professor to resign after a video he made claiming white discrimination at UVM surfaced.

In April the Cynic reported on the frustration and guilt RAs were voicing about conduct enforcement as they were caught between students and administration.

On April 2 the UVM student body elected their new SGA President and Vice President, through which the President won as a write-in candidate.

The Cynic also covered UVM’s inability to meet its sustainability goals and the increase of marijuana use across the student body as a result of the pandemic.

The Cynic also reported on a march to Waterman in protest of UVM’s handling of sexual assault cases. The crowd of thousands filled the Waterman Green as they listened to leader Athena Hendrick speak.

In solidarity with Palestine UVM students and Burlington community members marched from Battery Park to City Hall on May 15.

In the past 138 years of the Cynic’s history its staff has covered wars, conflicts and other pandemics.

As the academic year of 2020-2021 comes to a close it is important to reflect on both the trials and progress we have made as individuals and as a campus.